Every now and then I've been sneaking a peek at the live webcam broadcasting the One & Other artwork on the Fourth Plinth in Trafalgar Square, seeing who's on and what they're doing. Most are rather unexciting, just sitting there or standing waving at people. On Thursday afternoon someone called Amanda build her own sculpture of a man out of bread rolls (I think) which was quite fun.

On Thursday afternoon I went up to Trafalgar Square since I was going to see Grace Jones at the other end of the Strand later that evening. When I got there the woman on the plinth was just sitting licking a lolly. O. That was it. Then she stood up and blew some bubbles. Then she sat down again. It was re-assuring to see that there were security people milling in the crowds to make sure nothing untoward happened and no-one tried to climb onto the Plinth from below. The most exciting thing was that a young woman came up to interview me for local radio about what I thought of the goings on in the Square - I said I liked it and it was a good way of bringing more people to the Square.

I wanted to see the big change-over when the small crane appears to lift one person into the plinth and remove the previous person - who will the replacement be and will he/she be more exciting as an art installation? Um, the 7pm bloke had messages written on A2 sheets of paper that were difficult to hold up properly in the breeze - if you're going to have written materials they should really be on stiff cardboard.

Change-over over, we went up the side of the National Gallery (anyone know why the front is all boarded up?) to Val Taro for food and then back shortly after 8pm and there was a woman in lifeboat wetsuit promoting the Royal National Lifeboat Institution. If I get selected for an hour on the Plinth I have no idea what I'd do... easy to be critical of other people but would I be any better as Art?

Anyway, here are some photos I took in rough chronological order, 6pm leading to 8pm... 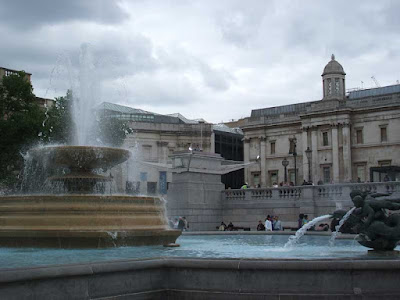 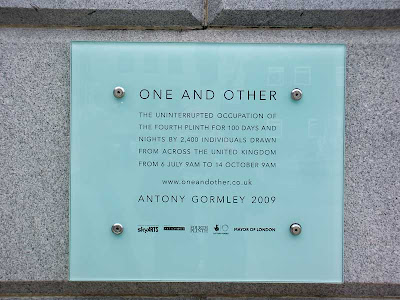 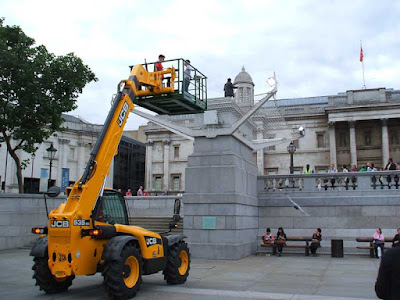 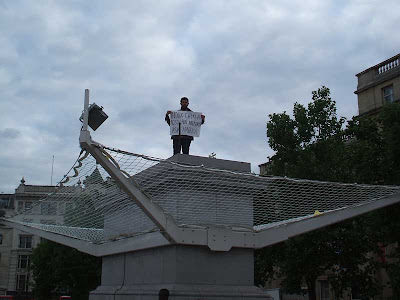 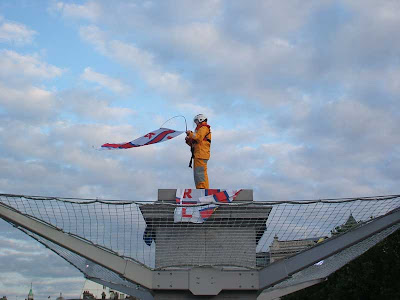 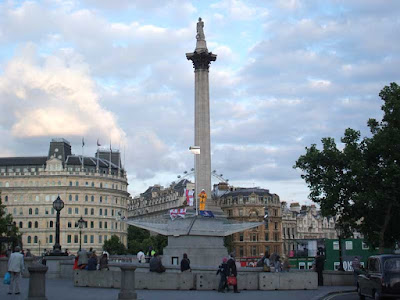