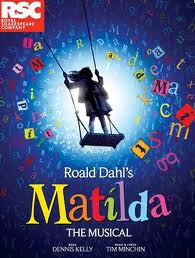 Last night Chris treated me to a late booking to see the new musical on the block, 'Matilda The Musical' at the Cambridge Theatre. I'll pre-empt a lot of wittering on by saying it is excellent. It really is. And great fun.

As soon as we got inside it started to draw me in with the chalk boards all over the walls with kids drawings, silly jokes, comments on school dinners and suchlike, getting us all in the mood. My favourite joke as 'Why is 6 scared of 7? Because 7 8 9' (geddit?). I'd be scared too! Inside the theatre proper and the stage and surrounds are also decorated with chalk boards and building blocks with letters scrawled on the side, flooding the place like a big primary school. It worked really well, not too over-powering but just enough to get us all in the mood.

It's the story of little five year old Matilda Wormwood starting school. Her parents didn't want a child and, if they did, wanted a boy not a girl. She's a genius in a humdrum household of a ballroom dancing mum and a used car salesman dad. But Matilda can tell stories and can challenge authority in the shape of the evil headmistress and help the nice teacher get her inheritance. O yes, Matilda is special all right. 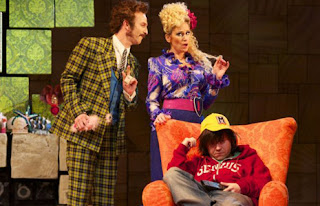 I was terribly impressed with the professionalism of the child actors singing and dancing their hearts out, choreographed to a T and no flagging at all. The child actors change regularly but I was very impressed with James Beesley as Bruce with his love of chocolate cake, Jemima Eaton as Lavender who must tell us everything and, of course, Cleo Demetriou as Matilda. She gave a masterful performance, striking all the right poses, tugging at out heart-strings and successfully speaking Russian at the end. It'll be interesting to see where she in in 10 years times.

Of the adults, I liked Peter Howe as Matilda's dad - he usually plays her brother but was stepping up due the normal dad being off - and Josie Walker as her selfish mum. Lauren Ward was lovely as Miss Honey, the nice teacher (naturally) and Bertie Carvel was magnificently menacing as the creepy and evil Head Mistress, Miss Trunchbull, the former Olympic hammer thrower. 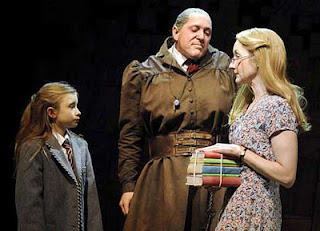 The songs are by Tim Minchin and they stand up in their own right with no hint of his voice singing them. I loved 'Loud' sung by Mrs Wormwood in praise of make-up and hair-dos and being loud as opposed to the mousey Miss Honey but my favourite song was 'When I Grow Up', the proper opener to the second half. It's a lovely song of hope and aspiration from the point of view of a small child and it transported me back an awfully big number of years to when I might have sung that song. I bought the cast recording on the basis of that song and I'm enjoying listening to the whole show again.

I also bought a badge at the merch stand that reads, 'The Bigger The Telly The Smarter The Man'. That is so *wise*.

Go and see it as soon as you can. And then see it again. I shall. 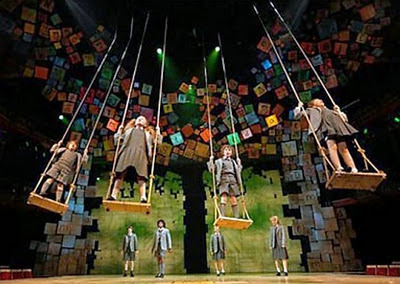