Blondie at The IndigO2 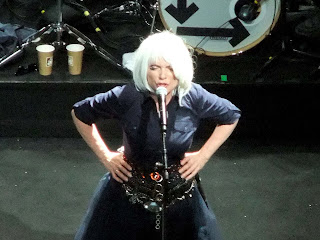 Last night we went to see Blondie at the IndigO2, the smaller 'club' space beside the O2 Arena. Blondie has a new album out in September ('Panic Of Girls') so I wasn't sure why they were on tour without an album to promote but I hate to miss an opportunity to see Deborah Harry, the woman who was loved by the whole world in the late '70s/early '80s, including me. I don't care if she's now 65 (sorry Debbie), she's still gorgeous (yes you are) and could teach younger "stars" a thing or two about stage presence and manipulating a crowd (please twist me round your little finger?).

Let's get the negatives out of the way first. Why do I always assume I can eat at the O2? You can't unless you're willing to join a queue to get into any of the restaurants and then put up with poor service because you're a captive audience. There are no 'hanging out' spaces, no use of the space, no seating, no concessions to sell stuff and make money - it's a very sterile place. And don't mention the problems trying to get the tube home... Oi! I said don't mention that! 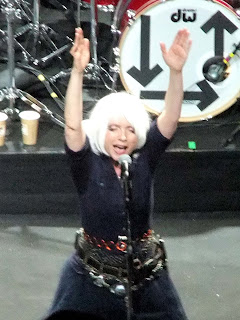 And one final tip - if you're going to the IndigO2 then don't buy tickets from the venue. I've done it a few times now thinking I'll get good seats and each time I've been half-way or worse back in the balcony with no tickets available for the so-called Kings Row at the front of the balcony. Clearly, they sell their best tickets off to ticket agencies so shop around. I will next time rather than accepting crap seats from the IndigO2 - I bought tickets the day they went on sale and ended up in the second from back row in the balcony and yet the gig wasn't sold out (sadly) so there's a problem somewhere. Anyway..... Blondie ....

The opening act was Little Fish and I'm not sure if that was the name of the band or of the lead singer. I swung between thinking she was just a cheap sound-a-like version of PJ Harvey and Patti Smith and thinking she was making an interesting sound. I'm not sure but I think I'll give her/them the benefit of the doubt.

After a break on came Blondie. Yes, *that's* Blondie on the stage, kids. Except there weren't many kids there. The audience was full of middle-aged (and older) people on an evening out - I didn't feel old at all for a change. Of course, by Blondie I mean Miss Deborah Harry. Debbie has always been and always will be Blondie. She came on stage in a big frilly frock, platinum blond hair (Chris said it was a wig but, obviously, he's wrong) and big sunglasses. The sunglasses lasted for a few songs and were then got rid of. 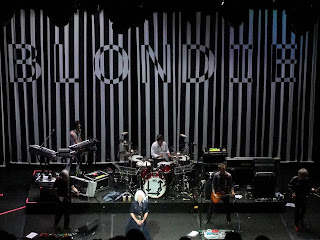 Chris Stein and Clem Burke are still in the band and I'm pleased they are - they add to the history of the band - but the other three blokes could've been anyone (but I liked the lead guitarist). Chris just stood at his place on the left of the stage playing guitar and singing occasional backing vocals, easy to ignore unless you know who he is. Clem 'I can hit these drums more than anyone else including God in the next 3 minutes' Burke did his thing of just hitting the drums more and more and more... I think he's on some special drummers drug that just forces you to hit everything in sight as often as you can and as hard as you can, and he does it so well. You know when you've been Clem Burke'd! 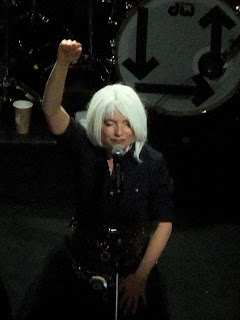 Once I'd got over that initial 'Wow, that's Blondie!' moment I could enjoy the set. Obviously they wanted to promote the new album and I have to say that all the new songs sound excellent, some fast and furious, some power-pop, but all worth a listen and a bounce to. When Blondie gave away the Christmas single, 'We Three Kings' last year I was very excited - if this was what the new album would be like then I would love it. I think I do. Some of the new songs are on YouTube but I'm not going to listen to them, I'll wait for the album, so roll on September.

They sprinkled the new songs in between the classics and I was overjoyed to sing along along to classics like 'Heart of Glass', 'Picture This' and 'Call Me'. There were extended versions of 'Atomic' and 'Rapture' that sounded excellent with the mad guitar thrash that provided some texture to the songs. 'Maria' was another highlight. Debbie was in great voice and did her trademarked 'go-go dance' to most of the songs.

I have to say I loved seeing them - a big part of it was the 'that's Debbie Harry' factor. The last time I saw them was at Shepherd's Bush 6 years or so ago and they were definitely better last night. They're not a nostalgia band, they have something new to offer and it'll be interesting to see how the new songs are received. I suspect I'll love 'em! 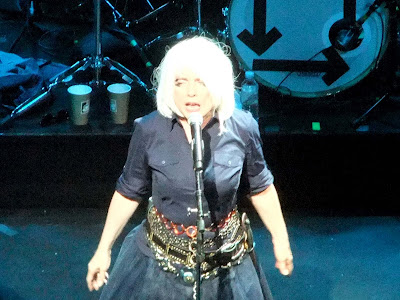 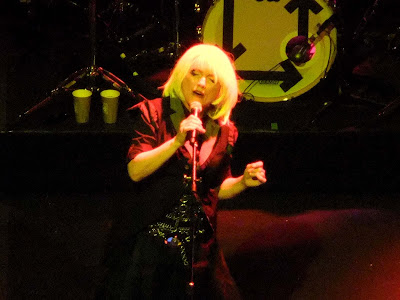 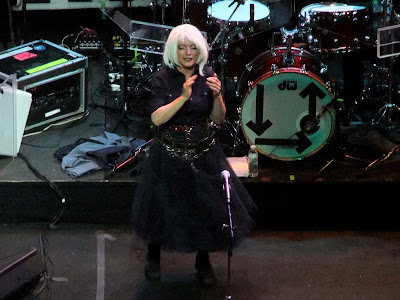 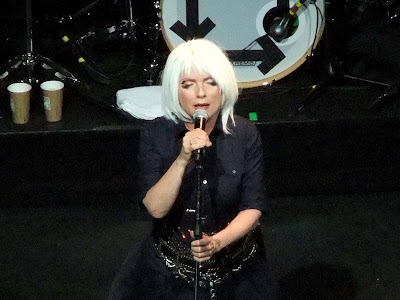