I mentioned back in September that there was going to be a SLADE Night on BBC4 at Christmas. Further details are emerging that you need to know about.

It's going to kick off at 9:00pm on Friday 21 December with the "It's SLADE!" documentary from the '90s followed by "SLADE at The BBC" that features archive material not seen since it was originally broadcast back in the day. That's followed by "SLADE in Flame", often referred to as the best rock music film ever made (it is too). That's a lot of SLADE! 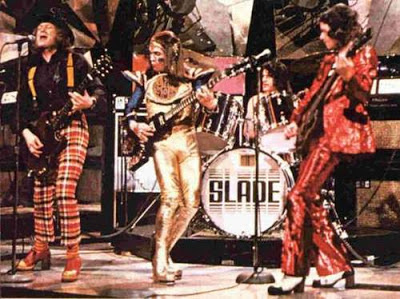 Those scallywag Viking popsters have just released their new single, a Christmas single, 'X-Mas (Let's Do It Again)' and it is good.  It starts off with Anders singing but when Stine joins in with her first "Oooo baby..." you know you're in safe hands. It's a lovely slice of optimistic, cheerful pop music and perfect for these chilly, damp and dark days. Go on, download it now! 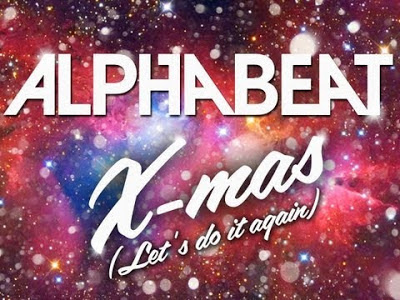 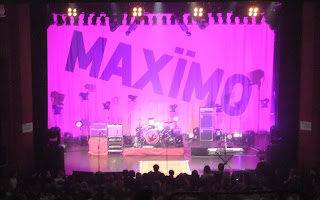 I saw Maximo Park at Shepherd's Bush Empire as part of their tour to promote their new album, 'The National Health'. They were, obviously, much fab. I quite like Shepherd's Bush as a venue, it has rock'n'roll roots, a bar that sells Guinness and perfect sight-lines from the balcony.

As soon as the lads came on stage to a mass of lights I knew we were in for a treat and a light show to envy. Maximo Park seem to have a 'take no prisoners' mentality when they play live - wind them up and set them free and the power and energy streams from the stage to energise us all. I couldn't help but break out into a big smile when they started playing some of my favourites and I was singing along (my voice thankfully being drowned out by the volume) and giving them solid claps at the end with a few 'wooh's too! 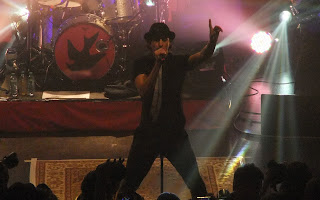 I do like some Maximo at full volume and the new record is perfect fodder for energetic punky pop sung in a Geordie accent and blasted out through the speakers. While the band focused on the music Paul leapt around the stage like a thing possessed, singing his heart out. He kept thanking us for being there - no, Paul, *thank you*.

The Maximos always give good gig and favourites that night were drawn from their four albums over the last ten years.  I always moan that they don't play 'A19' but they played 'Acrobat' from the first album and a song I don't think I've ever seen them play live, so that was good. We also had 'Going Missing', 'Limassol', 'Apply Some Pressure' (of course) and the lovely 'The Coast Is Always Changing'. 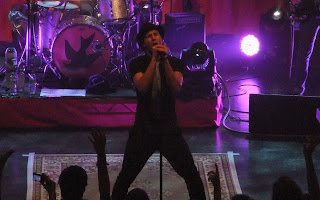 Highlights from the second album were 'Our Velocity' (for the encore, naturally), 'Books From Boxes' and 'By The Monument' (and I know which Monument Paul refers to) and, from the third album, 'Questing Not Coasting' and 'The Kids Are Sick Again'.

It was the songs from the latest record that got me excited. I saw the Maximos at Heaven over the summer playing some of the new songs and it was great to see the lads play them again as they've grown into them as live songs. They were all terribly impressive.

I think my favourites were 'The National Health'. 'Hips And Lips', 'The Undercurrents', 'This Is What Becomes Of The Broken Hearted' and 'Wolf Among Men'.  There are so many good songs on the latest record it's difficult to choose just a  few. If you get the chance to see the Maximos play live then grab it with both hands - the waves of sound and energy that flow from the band are astonishing - they're an experience. Thanks lads! 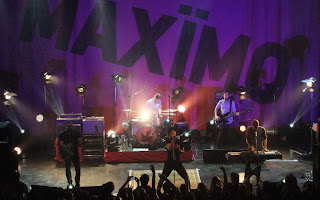 Those lovely folks over at Moshcam have posted the song by song video of the whole show from Amanda Palmer & The Grand Theft Orchestra at Koko in London on their site. Just click here for some joy! 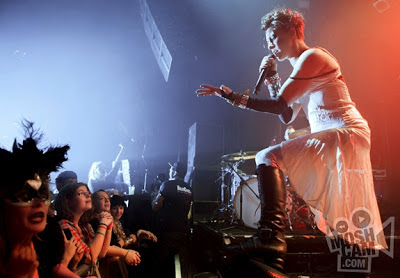 'Do It With A Rockstar' was the first song I heard from Amanda Palmer & GTO when she sent it out to Kickstarter backers as a gift back in May and it's still one of my favourites from the 'Theatre Is Evil' album. After my first listen I knew I wanted to see the video. With such tremendous material I knew Amanda would make a video worth watching. I have waited patiently and seen her perform it live a couple of times and, finally, here it is. The video.

Every rock star cliche has been thrown in here as well as the band's own rock star fantasies. They are vibrant, they are alive and they are sweaty and covered in glitter.

It starts off with disparate AFP fans and haters talking about going to the gig - drag queens and hipsters - arriving at the gig for the performance of their lives and the after-show party backstage. *This* is how a rock star lives!

What more can I say? Watch the video!

Email ThisBlogThis!Share to TwitterShare to FacebookShare to Pinterest
Labels: Amanda Palmer, Do It With A Rock Star, Grand Theft Orchestra, Stoya 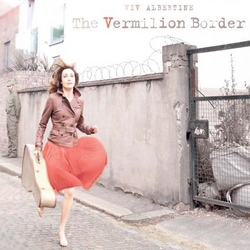 I am delighted to tell you that Viv Albertine's first solo album will be available on 5 November. 'The Vermillion Border' has been made available to her PledgeMusic backers (such as me) as a download for the last few days and, today, I received the hard copy along with the booklet of lyrics. It is fab! And even better, Viv sends her love to me on the back of the CD (which is replicated, Viv).

It kicks off with 'I Want More' with a riff to peel your face off as Viv sings, 'No compromise, I want more!'. It's followed by 'Confessions of a MILF' and the tales of the little wife in her home sweet home. Viv adds notes to each song in the booklet and tells us that the song was recorded in Mick Jone's mobile studio. Jack Bruce joins her on 'In Vitro' with a relentless bass line thrumming away under and over her vocals. Other guest bassists include Tina Weymouth, Glen Matlock and Dennis Bovell, all of whom I've seen play live. And, of course, Dennis produced The Slit's first album, so they've got shared history.

Viv has a lovely way with words and I love the start of 'Hookup Girl' that opens with, 'In another town You would be a whore, But in North London You are just a bore'. 'Don't Believe' contrasts the things Viv believes in and doesn't believe in, from love to trilobites (how often do you see that word in song lyrics?). 'Still England' closes the record and lists all the things that make England the place it is.

I was delighted to hear Poly Styrene name-checked in 'Still England'. Viv knew Poly and it's lovely to see her include Poly in her list of iconic Englanders, along with Virginia Woolf, Dusty Springfield, Keith and Mick, The Kinks and T.Rex. She also includes,' Sid The Vicious, John The Rotten, Alfred The Great, Dot The Cotton'.

In one sense, this is exactly the kind of record you'd expect from Viv - post-punk for the 21st century, jagged guitar, challenging, no-prisoners, looking back and forwards at the same time. In other words, a classic album. It is art in a real sense. I also like the attention to detail in the booklet in which every 'v' is coloured vermillion. Give the record a listen and download it - even better, get a proper copy with the booklet. Riffs to scrape your face off and words to make you smile. You won't be disappointed.

Charity Box - The First Half

I told you about Dawn Amber Harvey's Charity Box a few weeks ago and it happened tonight. I was here. Well, I was there for the first half before the effects of a long day set in and I disappeared at a break in the proceedings.

It's quite a feat to draw together some of the names of alternative cabaret for an innovative event to raise money to continue a masters degree. That in itself deserves a round of applause for being brave enough to even try, let alone pull it off. Also worth mention is that I had a pint of Guinness for, I think, the first time this year. Well done me.

Our hostess for the evening was Eve Ferrett who sang some songs and delivered some patter and got us all singing along to the chorus of 'Crazy Horses' by The Osmonds (luckily I knew the words). We had Dexter Clark telling us about his glamourous celebrity friends and their hairstyles and the glitter-face of Marcus Reeves singing his new single, 'Black Tears', available to download on Monday. We had Sharia Law singing songs to the audience and singing the first few lines of 'Santa Claus Is Coming To Town' to me and saying I looked like Santa (yay! mission accomplished early!).

We also had the very tall Jonny Woo singing 'Dressed As A Girl' and inviting the audience on stage with him (I, obviously, declined). I liked this electro-ditty and look what I've found courtesy of YouTube:

Congratulations to Dawn for pulling all this together. And congratulations for getting on stage in a blue wig (to match her red hair) to join in Jonny's backing dance troupe! How dd I miss that photo opportunity? If you like innovation and a daring attempt to fundraise, you can put a few pounds in the coffer by clicking here.
Scribbled by Owen at 11/01/2012 11:55:00 pm No comments: