The Dresden Dolls and the Mermaid Parade

Why am I never there when it happens? What do I mean? A reunion of The Dresden Dolls is what I mean! And here is a photo they've just posted on Facebook, a photo I've not seen before and I love it. It is passion and art, it is giving your all to the moment, it is  love. 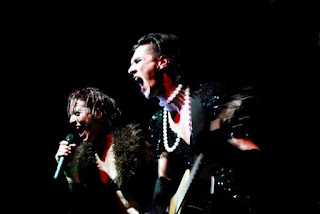 They're getting together tonight in New York to do some songs in support of the Mermaid Parade in Coney Island. Brian Viglione is a special guest. The blurb says: 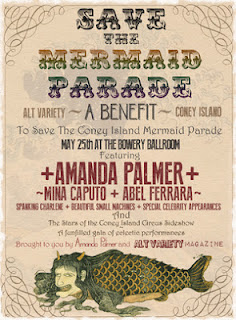 When Hurricane Sandy barreled its way through the Northeast in October 2012, it devastated many areas, including New York CIty's beloved Coney Island. The hurricane hit and destroyed a large portion of Coney Island, including the headquarters of Coney Island USA – a not-for-profit arts organization, which developed and produces the Coney Island Circus Sideshow and the annual Mermaid Parade. Because of the devastation caused by Hurricane Sandy, this year's Mermaid Parade may not be.
But Coney Island is scrappy and strong. Coney Island has faith that New Yorkers and beyond will refuse to let the Mermaid Parade wash into the sea.One such supporter and friend is Amanda Palmer. Palmer is an advocate of the arts and a true supporter of the artistic expression and community that Coney Island has long fostered. Palmer volunteered to join forces with Lee Wong's Alt Variety Magazine to perform in this benefit performance in the name of charity.All proceeds will go to hosting the Mermaid Parade and reconstruction efforts.Join us for a night of revelry with Amanda Palmer, Mina Caputo, Abel Ferrara, Spanking Charlene, Beautiful Small Machines, the stars of the Coney Island Circus, special guest performances and celebrity appearances.

The lovely Krista Siegfrids has released the video for her new single 'Amen' and she wants you to watch it. Obey Krista.

This is one of the many brilliant dance-pop songs on her first album, 'Ding Dong' (available for download everywhere). I love the line, "I'm not a product I'm completely home made", as she walks into the club.

I bet she's great when she plays live. Hint.

Amanda Palmer at the Roundhouse

If you didn't already know, Amanda Palmer is returning to the Roundhouse on 12 July.

She last played there in 2006 and recorded the live Dresden Dolls DVD there. The Dolls played two nights to record the DVD and I'm pleased to say that I was there on both nights (I also blogged about both nights so use the search function to track them down). It was a fantastic experience and I have no doubt that seeing Amanda and the Grand Theft Orchestra will be an experience worth seeing. I saw them play three times last year and was well wowed!

I (naturally) bought tickets as soon as they went on sale. Take my advice and get tickets while you can - you won't be disappointed! 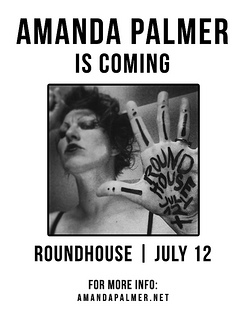 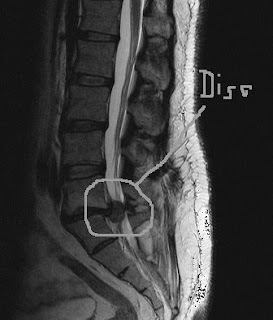 Where does the time go? Some of you will know that I've had several operations for a slipped disc in my back and have blogged about two of the operations. Well, I had my first operation thirteen years ago today. It's an anniversary of sorts. And this is what my slipped disc looked like in 2007 - yes, that is a real picture of my insides after getting an MRI scan. Its squeezing out between the vertebrae and pressing on the nerves that run up the spine.

I was admitted to Atkinson Morley Hospital in Wimbledon (yes, where they do the tennis) thirteen years ago yesterday with a view to having the operation first thing the next morning. I vaguely recall that it wasn't first thing since an emergency operation took precedence, and I was done in the afternoon. I was dosed up with morphine afterwards so don't remember much after I woke up.

Something I do remember is trying to get up at some point during the night to go to the toilet and feeling absolute agony when I'd managed to sit up and my weight pressed down on where I'd been opened up in the small of my back.  At that point a nurse brought a 'bottle' so I didn't have to move away from the bed. I'll never forget that moment, it felt like the weight of the world was pressing down on me.

Atkinson Morley Hospital was a small hospital based inside an old country house from the early 1800s when Wimbledon was in the countryside rather than the suburbs around London. The hospital closed years ago but is remembered in the name of the building that makes up a new wing at St George's Hospital in Tooting. And I remember it too.
Scribbled by Owen at 5/23/2013 08:07:00 pm No comments:

Trevor Bolder and The Spiders From Mars

The sad news tonight is that Trevor Bolder has died. He did lots in the musical world but will always be remembered for his work with the Spiders From Mars. He had the ridiculously long side-burns and was on Top Of The Pops that fateful night when David Bowie introduced us to Ziggy Stardust and 'Starman'. That one performance burned him into our memories.

Farewell Trevor, you are - and will always be - part of history. 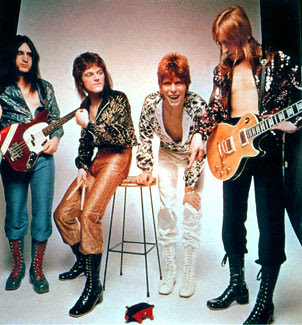 I've just taken a look at my blogger dashboard and it tells me that I've published 1960 blog posts since I started the Plastic Bag in 2005. That's a lot of posts. The odd thing is that I was born in 1960 (yes, I am that old).

This blog really is a bit of a plastic bag, a bit of this, that and t'other. It's named after a song by X-Ray Spex, punk heroes from the 1970s, in which Poly Styrene sings about her mind being like a plastic bag. It includes gig and theatre reviews, think-pieces about age and punk sensibilities, records I've bought, complaints and moans, stories from my travels around the world, the London Olympics 2012 and a host of other things. Readership jumps around quite radically and I'm currently in a downturn in the numbers but I still post. Maybe its an addiction.

I've never had a problem with my age and I'd hate to be young these days. The travels across the years have made me who I am today and I quite like who I am. That leads me to another coincidence: I first saw Amanda Palmer play live in 2005 (as half of The Dresden Dolls), slightly before I started this blog. She wrote a gorgeous song about being who you are called 'In My Mind' and here is the video for your delight. 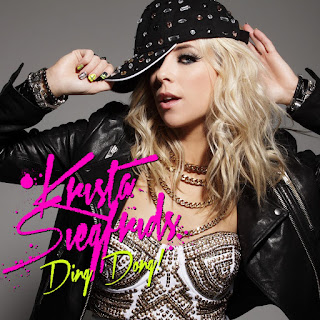 I have discovered the future of pop music and she is from Finland - the lovely Krista Siegfrids.

Krista represented Finland in the Eurovision Song Contest this weekend with the catchy and hook-laden 'Marry Me' and she wuz robbed. She should have won if anyone in Europe knows anything about pop music. I fell in love with her by the second chorus and realised I could sing along in Finnish - "uh oh, uh oh a ding dong!". I love it!

Her performance on Eurovision is reported to be the reason why the show wasn't shown in Turkey because she kisses one of her female backing singers at the end of the song. This was explained by Graham Norton in his commentary of the show to say that if the sight of two women kissing offends you then you "should grow up". Well done Graham.

Here's her video for 'Marry Me': 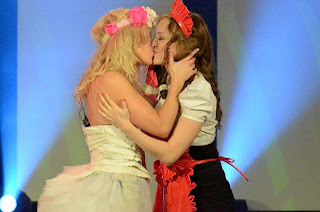 On the basis of this one song I downloaded her album, 'Ding Dong', that was released last week. It's full of pop-dance gems and deserves to go global. In an odd way it reminds me of hearing Cyndi Lauper's 'She's So Unusual' for the first time in the sense of 'where on earth has this exotic creature come from?'. And don't worry, all the songs are in English so go on and download it now.

Move over Britney, there's a new girl in town and her name is Krista. If she's not a massive star by the end of the year then I'll eat, um, something...

Eurovision and Kristina Siegfrids - 'Marry Me'

I only ever seem to come across the Eurovision Song Contest at the last minute these days but I'm pleased I did this year since there were some great pop songs on show. I haven't been a regular viewer in recent years but the quality of songs and performances seems to have improved and I liked this years' show.

It was heavily dominated by the northern Europeans this year, particularly the Scandinavians with a new Eurovision anthem being written by Bjorn and Benny from ABBA (who won Eurovision 29 years ago with 'Waterloo'). The Balkan nations didn't get through this year which was a shame since they're always interesting (and always vote for each other). Of course, we didn't win but well done to Bonnie Tyler anyway.

My favourite song this year was 'Marry Me' by Krista Siegfrids from Finland from her album 'Ding Dong'. We were warned in advance that the song ended with a 'lesbian' kiss and that's what made Turkey decide not to screen the programme. The best comment of the evening was Graham Norton on BBC1 saying that if a girl on girl kiss offended you then you need to grow up. I can only agree.

It's a fab song and a fab pop album!

I've mentioned Justin performing 'The Golden Age of Hustlers' by Bambi Lake in this blog a few times and I don't apologise for mentioning the song again. This time it's for a Kickstarter appeal to raise funds for Justin to do a video of the song. I'm all for it. This is what Justin says:

I don't know what it is about the song that enthrals me. It's a world I don't know and will never know since it's long gone. I suspect that's part of its allure, much like the Berlin of the 1930s and the London of the 1960s. It's almost within touch and sight... but not quite. Listen to Justin singing it live on the Kickstarter page.

Please support the Kickstarter appeal by clicking here and pledge whatever you can afford. This isn't a promo vehicle, it's about keeping the past alive for any curious souls that might like to be a bit adventurous. I've pledged my support.
Scribbled by Owen at 5/13/2013 11:37:00 pm No comments:

'I'm So Excited' by Almodovar

I was treated to a viewing of the new film from Pedro Almodovar on Friday, 'I'm So Excited', at the Ritzy at Brixton. We were taken to an 80s-style explosion of colour and campness that will keep a smile on your face throughout. It's funny, it's rude and it's a great, daft story with Cecilia Roth as a high class call girl with videos of her with the most important people in the Spanish-speaking world. It's all the fault (obv) of Antonio Banderas and Penelope Cruz. Trust me, go and see it.