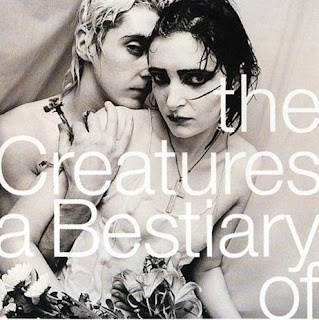 I've been re-discovering The Creatures over the past couple of weeks. Siouxsie and Budgie created some of the most unusual and experimental music over the past couple of decades, fusing different musical styles to create their own unique sound. They burst into the public with 'Mad Eyed Screamer' from the 'Wild Things' EP (1981) and followed that with the 'Feast' album (1983), recorded in Hawaii and using a range of mad percussion instruments. I got 'Feast' back in the day and loved the exotic gamelan sounds that I finally got to hear for real a decade later when I went travelling. I don't think 'Feast' has ever been released digitally but it's included on 'A Bestiary' which includes all the early Creatures songs from the album, ep and singles. 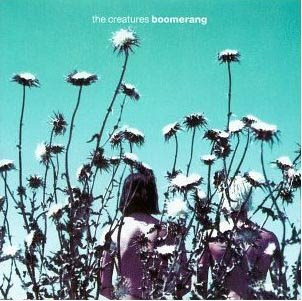 The Creatures went quiet for a few years and then re-emerged with 'Boomerang' (1989), recorded in Andalucia this time and with a very different, although still percussion driven, sound. I like 'Boomerang' but only had it on cassette - it doesn't seem to be available either in hard copy or for download so I resorted to eBay to refresh my memory of the songs. The two singles form the album, 'Standing There' and 'Fury Eyes' are wonderful slices of avante-guarde pop, at once jittery and different but then wonderfully playable.

More silence from The Creatures for a decade before emerging again with three albums in the space of a year or so, all based around the marvellously dark 'Anima Animus' (1999). Far more electronic in sound and texture rather than percussion but still unmistakeably The Creatures. As well as the album there was also the 'official remixes' album, 'Hybrid', with remixes from 'Anima' and from the various limited edition EPs that were issued around the same time which were also released as 'U.S. Retrace'. 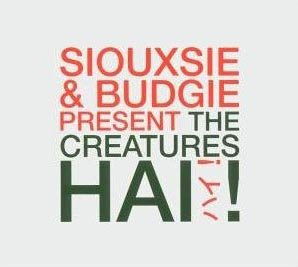 A mere four years later and 'Hai!' (2003) was sprung on us, a return to a percussion-base, particularly mad Japanese drumming, big drums and big sounds. And wonderful songs like 'Godzilla' (who eats cars, by the way) and 'Attack Of The Supervixens'. Siouxsie used 'Hai!' - the songs, the sounds and the themes - as the basis for her 'Dreamshow' shows which were also fimed for DVD. 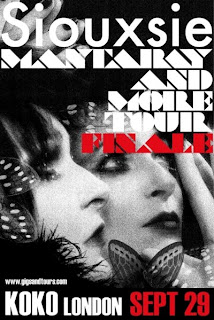 And that is the last of The Creatures. Siouxsie and Budgie separated and Siouxsie emerged last year with her latest magnificent creation, 'Mantaray'. I've seen Siouxsie three times on her ongoing Mantaray And More tour and tonight see the final show at Koko which, sadly, I'm not attending but which is being filmed for DVD.

Siouxsie is one of the true originals and keeps emerging in one guise or another. Long may she continue - I look forward to the DVD and to the follow-up to 'Mantaray'. I'm sure both will be fab.