Viv Albertine at The Purcell Room 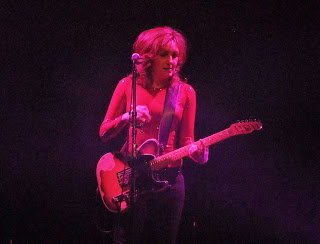 Tonight was the long-awaited gig by Viv Albertine at The Purcell Room on the Southbank. This was the first time I've seen Viv properly headline a gig and it's nice that it was at a 'proper' venue like The Purcell Room. I supported Viv's PledgeMusic appeal to fund her excellent first solo album ('The Vermillion Border') and I hope there'll be many more.

I never saw The Slits back in the day but I've seen Viv play five times this year:


And she just keeps getting better! She's got a tight bunch of musicians around her that get the sound she wants to create and tonight was the first time I've seen her with lights to highlight (and lowlight) her songs. An excellent gig all round! 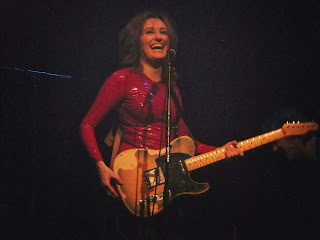 She came on in a noticeable shiny red latex top and launched into 'Don't Believe' after asking the women in her band if they believed in love - they didn't. I, however, loved the nod to the New York Dolls when she said 'L.U.V.'. We had a good selection from the album and 'If Love' from the ep, a well structured set that moved along nicely. Favourites tonight were 'Couples Are Creepy', 'In Vitro' and the show closers of 'I Want More' and a great version of 'Confessions of a MILF' (I love the line 'I chose being an artist over being a wife, now I'm going to lead a very lovely life').

Half-way through the gig she told us that in the old days she used talcum powder when she wore rubber but now it was a case of smearing lube on herself when she wore her latex top and it had started melting and coming out at the wrists. Brutal honesty never hurts. 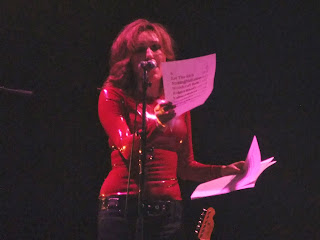 After much clap clap clapping Viv came back alone saying the band had all headed for the beer and wine and she started playing 'Hookup Girl' during which the band appeared, one by one, to join in. I've never seen Viv play 'Hookup Girl' before so that was fun. She then went into 'Still England', one of my favourites, name-checking what she likes about England which bounced along nicely and in the musical break in the middle the glitter ball was turned on in a wow moment. I've not seen Viv play the whole song before, usually she ends at the musical interlude bit but this time continued. Viv took off her guitar and picked up pages printed with the names in the song and read them out as the bass turned into a disco riff for the remainder of the song, finishing with "Tosser, wanker, nutter, cunt" and the lights went off on the last word. Very dramatic.

Much more clap clap clapping and Viv came out again to tell us that she'd be doing a signing in three minutes. Cue me to scarper into the foyer to get a place in the queue to find I'm at the front, waiting for Viv to arrive. When she did she met a friend and was diverted so set herself up at the ice-cream stand! So I joined the hubbub around her to say hello.

When I met Viv I'm afraid I went all fan-boy. I saw she had the pages of names from 'Still England' so I asked if she'd sign the page that included Poly Styrene and she hunted through them to find that page and signed it for me. I said that I loved 'Disco Still England' and she seemed to be delighted when I told her I'd been at the 12Bar gig. I then asked for a hug to which she said of course so long as I didn't mind getting lube on me - as if I would. We hugged! 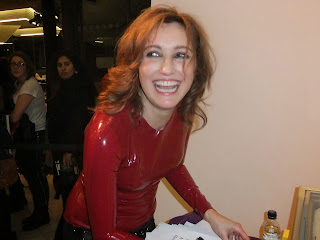