My Christmas treat was Matthew Bourne's new production of 'Sleeping Beauty' at Sadler's Wells. As ever, Sadler's Wells was in festive garb with the trees outside covered in lights and a giant Christmas Tree inside that, sadly, no-one seemed to pay any attention to. I did, I gave it big lookings over a glass of red wine.

I've seen most of Matthew Bourne's works at Sadler's Wells except for 'Highland Fling' which I hope to see soon. His 'Swan Lake' and 'Nutcracker' are firm Christmas favourites and I'm happy to add 'Sleeping Beauty' to that list, just as Tchaikovsky did.

I loved the production, lush staging and lighting, impressive dancing that elegantly told the tale of Princess Aurora and her suitors and the hints of danger throughout. The good faeries and the bad faeries with hints of vampirism, both Victorian fantasies. So appropriate to a tale that starts in 1890 with the adopting of the Princess and, in1911, by her Edwardian coming of age birthday. Folklore and magic rule the day, even when the story shoot forward 100 years to characters in jeans and hoodies.

The tale is easy to follow through dance and drama. The good faeries brining happiness and joy to the new baby princess, flying through the open window to dance around her cot. Sadly, the bad faerie godmother can also get through the window to curse Aurora to be caught by the good faeries who try to mitigate the curse. 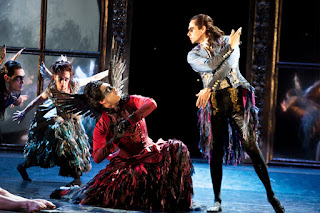 At Aurora's coming of age party she meets the son of the bad faerie godmother who holds a black rose. After dancing with her young love, the gardener, Aurora picks up the rose and pricks her finger and the curse falls on her. The only way to save her is to take her to sleep in faerieland behind locked gates that will remain locked for 100 years. To ensure her lover is there to save her, the good faerie prince bites his neck as the curtain falls on the first half. You could almost feel the collective intake of breath across the audience as the faerie prince exposed the young gardeners neck ready to bite... 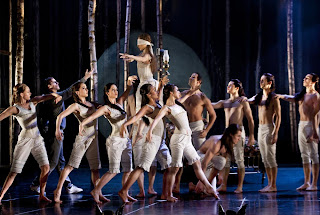 The second half opens 100 years later and presents the battle for Aurora's soul, the battle of good over evil and a life-affirming continuation of fantasy. I won't tell you what happens since it would be far better for you to see it when it goes on tour after the current Sadler's Wells run. It is, needless to say, excellent.

I loved the characterisation of the dancers, the simple moments of joy and happiness of Aurora and her love, the reek of evil around the dark godmother and evil faerie prince (played by the same dancer). The valiant good faeries defending the young princess and then taking care of her during her long sleep in faerieland. The battle between the good and evil faerie princes in the penultimate scene filled with faeries in black and red, with red lighting bathing the stage in gothic horror.

It's a magical telling of an old tale, beautifully presented and performed and perfect for Christmas and the dark winter months. Make sure you see it if the tour comes anywhere near you. I've already booked to see it again. 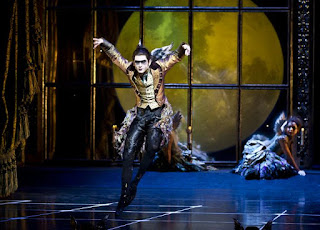 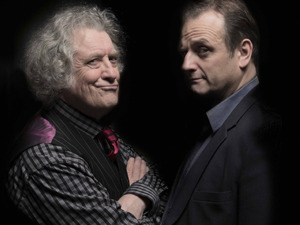 It's amazing what you can find out during a lazy Sunday afternoon browsing the internet. Today, I found out about a new album from Sweet (New York Connection, issued earlier in 2012) which was instantly downloaded and rocked along to. While listening I went browsing and found out that Noddy Holder - Sir Noddy, as should be - is going on tour in May 2013. Not gigging, sadly, but a spoken word tour, but talking's good too.

It's billed as 'An Evening with Noddy Holder in Conversation With Mark Radcliffe' and is only eight dates and all are in the north of the country.  The dates are:

I will, of course, keep my eyes peeled in case any more dates are announced.

I saw Sir Noddy last Christmas at Union Chapel when he played the Narrator in a new version of 'A Christmas Carol' and it was great to see and hear him again after so many years. I also saw him back in September at the Marc Bolan celebration at Shepherd's Bush.  My next rendezvous with Sir Nod will be on Friday 21 December on SLADE Night! on BBC4.

I'm more than happy to support it. Watch the video, listen to the song and then download it from iTunes - it's only 79p. The legacy grows.

Invasion of The Polite Snowmen

If you look anywhere in this blog in December you'll see that I'm a card-carrying Christmas-oholic. I like seeing the Christmas lights around London and, closer to home, on Streatham High Road. They're always a bit cheap and cheerful but I like them. I always watch out for The Polite Snowman standing high up a lamp-post with his big smile and polite manners. I call him The Polite Snowman because he raises his hat whenever I approach and then pops it back down on his head. He may well do the same to you.

The Streatham lights were put up a few days before they were switched on and I was delighted to see The Polite Snowman outside the Horse and Groom pub as I walked home from the station after work. Good, he's back, I thought. The first evening after the lights were switched on, I came out of the station and turned right and there, in the distance, I could see him shining away and raising his hat - what a polite snowman he is.

And then it happened. I realised there were two Polite Snowmen! Cor, The Polite Snowman has brought one of his cousins to Streatham. I, naturally, raised my cap and said, 'Good evening Mr Snowman' as I walked underneath his cousin and then again under the original Polite Snowman. I'll get a chilly head in this cold weather but I must be polite in return to the Snowmen. After all, the Snowmen bring the snow.

Walking further down the High Road and, as I glanced on down the road at St Leonard's, what did I see? No less than two more Polite Snowmen beside Streatham Green, more cousins joining The Polite Snowman for Christmas. I couldn't help but break out into a big silly grin. I wonder if that means we'll get even more snow?

And here he is, The Polite Snowman being polite: 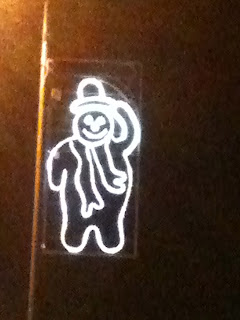 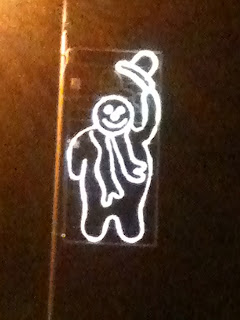 The Human League at the Royal Albert Hall

I was privileged to see The Human League at the Royal Albert Hall on their current tour and they were glorious - as if they could be anything else? Phil did his usual manic running about the stage and the girls danced with their arms above their heads (which is the law). Susan and Joanne have been dancing like that for over 30 years and you know you're in for a good show when you see those arms go up for the first time. But I'm leaping ahead...

The Royal Albert Hall is a big barn of a place and it was full, all ages, not just those who remember the League from back in the day but there was definitely a tendency for the older folks to be having a night out. As ever, the Human League take care in their set design and excellent lighting, with different colours bathing the stage and spotlights on Phil and the girls. There were clothing changes, sticking to their monochrome palette although Susan went a bit glam and sparkly at the last change. 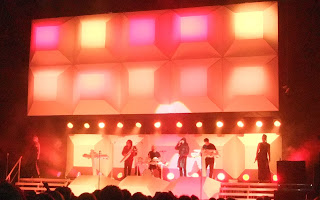 The show opened with lasers flying around the stage and into the audience as we listening to a stirring orchestral piece called, I think, 'Explore', and then the screen in front of the stage rose and there they were in all their haughty glory leading off with 'Sky' from 'Credo' (the last album). The applause was interrupted by the opening chords of 'The Sound Of The Crowd' and, row by row, everybody got to their feet, clapping and singing along. And, quite frankly, I didn't stop singing along, as we moved through 'Open Your Heart', 'Heart Like A Wheel', 'All I Ever Wanted' and the great 'These Are The Things Dreams Are Made Of' which always makes me smile when The Ramones are name-checked in the chorus. 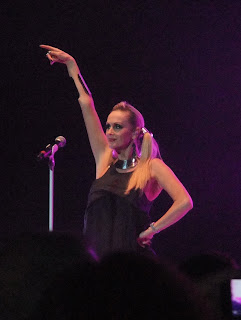 We then had a Phil moment with him pacing the stage to 'Seconds', followed by 'The Lebanon', 'Louise' and 'One Man In My Heart'. A couple more songs from 'Credo' followed, 'Night People' and 'Electric Shock', an then were back to the classics of 'Love Action', 'Tell Me When', 'Fascination' and 'Mirror Man'. And that was it, all over. All over? Surely not, as the mad clapping and stomping raised the roof and back they came for 'Goodbye Bad Times' (from Phil's '80s album with Georgio Moroder) an amazing 'Don't You Want Me' and finished off with 'Together In Electric Dreams'.

When you've got a songbook like The Human League you can pick and choose how to fill a setlist and this was a good 'un even if we didn't get 'Being Boiled'. This is billed as the XXXV Tour celebrating how long they've been around and 'Being Boiled' was the first song of theirs I ever heard, and that was on the John Peel radio show back in the late '70s. 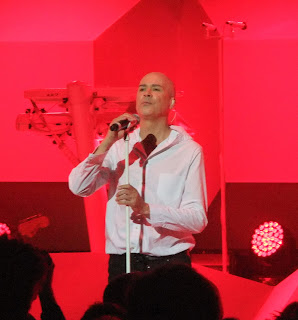 The whole gig was nothing short of magnificent. They tamed the barn that is the RAH and brought sense and order to the stage, defining their space and lighting it perfectly. The sound was perfect. The Human League were perfect. I can easily say that this was the best gig I've ever seen at the RAH.

Highlights for me were a tender 'Louise', a dramatic 'Open Your Heart' and 'The Lebanon' which is always a firm favourite. I was secretly delighted to be word perfect for the rap in 'Love Action'. The songs of the night, however, were 'Don't You Want Me' and 'Together In Electric Dreams' in the encore. It's lovely seeing Susan take the lead vocals and holding out the microphone so we sing her line back at her, "I still love you". And we do. 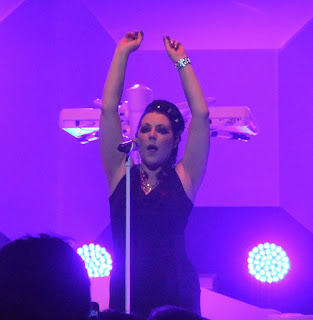 The whole place was singing along to 'Don't You Want Me' and, with the acoustics of the RAH, it was an amazing, shiver-inducing sound. I've never heard a sound like it. It must be amazing to be in the band and see and hear the audience take wing with that song. Finishing off with a euphoric 'Together In Electric Dreams' was perfect to follow 'Don't You Want Me', taking us to the edge and pulling slightly back, leaving us in a comfortable and happy space.

Philip, Susan and Joanne deliver perfect pop, always and forever. They were gods in the '80s and they still are. Phil striding back and forth across the stage, the lasses wiggling their hips and raising their arms and that amazing sound they collectively make. I love your love action... 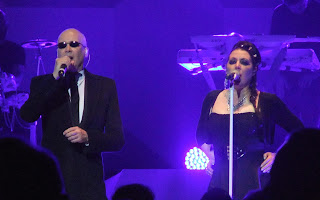