Amanda Palmer & The Grand Theft Orchestra at The Roundhouse 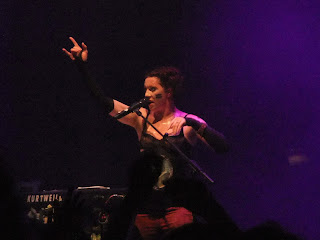 Last night I communed and got sweaty with Amanda Palmer and her Grand Theft Orchestra at the Roundhouse, a venue she last played in 2006 with The Dresden Dolls. I was there in 2006 and I was there in 2013. Some things are *important*.

As ever with an Amanda gig, she invites half of north London to have a support or guest spot during the evening - she is a very sharing person, after all - but I was there for the main event and she burst onto the stage with 'Do It With A Rockstar'. And by the first chorus she vanished into the crowd at the front of the stage, wandering round and singing about being a needy rock star before climbing back onto the stage. She was off and running, giving us a series of great performances of songs from 'Theatre Is Evil'. 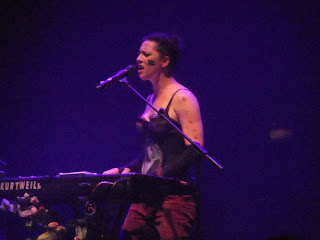 The band made a marvellous noise on stage and Amanda sang up front or to the side with her keyboard and, later, alone with her ukelele. The huge light show made a great backdrop - I couldn't help but think of previous, smaller shows over the years at places like Bush Hall and the ICA with minimal lighting and here was Amanda, the Rock Star, being flooded in all the colours of the rainbow. We were at the back of the hall so had a good view of the lights, less good view of the stage due to tall people but it was lovely to see Amanda commanding and confident and having fun. 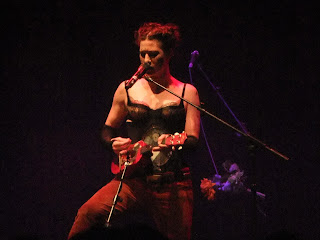 She gave us a good range of songs, old and new, including 'The Killing Type', 'Missed Me', 'Girl Anachronism', 'Astronaut', 'Want It Back', 'Delilah' (with Georgia from Bitter Ruin) and 'Bottomfeeder' during which she sang while crowd-surfing almost as far as where we were standing at the back before being passed to the other side of the hall and back to the stage. She told us about meeting Liam Gallagher at Glastonbury before launching into the bouncy 'Oasis'. The cover song for the evening was 'Common People', a great, powerful version with everyone singing along. 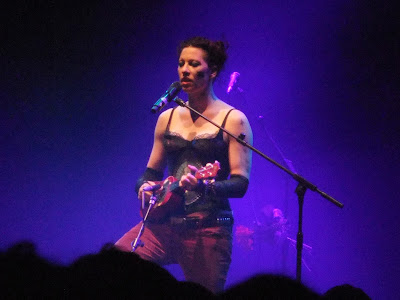 About two thirds of the way through the set the band left the stage and it was just Amanda and us again for some ukelele and piano magic. Amanda played a new uke song, 'Bigger On The Inside', a hauntingly beautiful and sad song sharing her feelings over the last four months or so of being misunderstood and attacked in the media. It was very raw and painful. That's something I love about Amanda, she shares herself with us with an almost brutal honesty.

We also had a rousing version of 'Map Of Tasmania' with the whole place joining in the cries of 'Fuck it!' in the chorus. Amanda moved back to her keyboard for 'The Bed Song' that always gets my eyes moist. 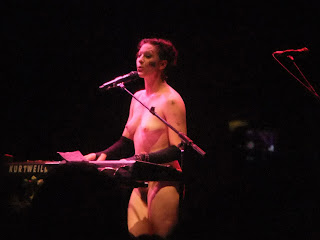 The encore saw Amanda come back on stage alone in her kimono to tell us about how the Daily Mail had published an article about her show at Glastonbury that didn't mention her songs but was just about how one of her tits had come free from her bra (I blogged about it at the time, see here). She played, in waltz time, her response to it, 'Dear Daily Mail' in which she points out that if they'd only used a search engine they'd have seen that her tits were used to being in the limelight. Half way through she dropped the kimono and continued the song naked while commenting in a very funny way on the Mail's misogyny about what was, after all, just a woman's body. What a great way of making a very good point! The whole audience cheered as she played and there's a video of the moment below - listen and watch! It's great fun! 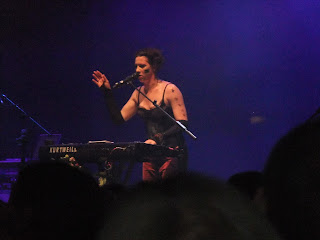 And then the band came back with all the various guests of the night to give us a stomping version of 'Leeds United' - whenever Amanda plays this I can't help but regret missing being in the video because I slept in that Sunday morning (drat!). And with bows and waves, after over two hours of playing the most excellent music, they left the stage leaving a hall full of happy, sweaty people to slowly exit and go out into the warm London night.

I was very happy with a great gig and more memories to sift through and add to my existing collection - another Amanda gig, Amanda Fucking Palmer the Rock Star.