In four days time (to the minute) I'll be seeing Buffy Sainte-Marie play her first London gig in forever. Today is the start of the countdown, with me having a Buffy day listening to Buffy on my iPod travelling to and from work. When I got home and checked my emails I found an email from Michael on the Buffy Yahoo group alerting everyone that some new sound files had been uploaded, eight songs broadcast by the BBC of a London concert back in 1992 to launch 'Coincidence & Likely Stories'. Obviously I downloaded them in a trice and now have a 'Buffy - Live In London' album.

What's more, Buffy was interviewed on BBC Radio 4 this evening on the Front Row show. Hear Buffy talk about signing away her rights to 'Universal Soldier' for $1, Elvis wanting a share of the rights to 'Until It's Time For You To Go', how she wrote the music to 'Up Where We Belong' and got an Oscar, being blacklisted in the USA and magic markers in her FBI file... She sounds on top form!

The interview is available on the BBC iPlayer for, I think, seven days, so click to listen to Buffy while you can. Scroll in to about 1:10 for the start of the interview. 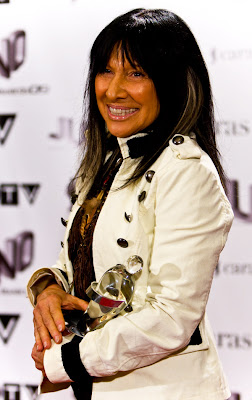 Have a GREAT time! Looking forward to reading all about it. Best - Michael