I've been on a short trip to Newcastle-upon-Tyne, city of bridges and Geordies, and, of course, my little brother and his wife who looked after me and fed me and forced me to drink alcohol. It's a year since I'd been up North so I thought I'd take some time off work and head up the east coast. I booked into the Copthorne Hotel on the Quayside for a few nights since I quite fancied staying in town. My room looked out over the Tyne and, looking left, the grand sight of the High Level and Tyne Bridges. That's all I need to see to know where I am. 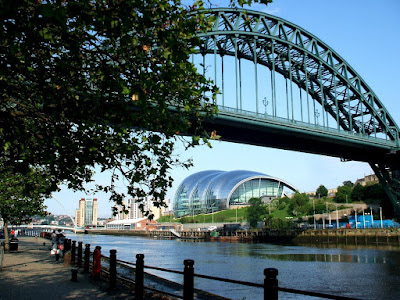 The Quayside has been totally renovated in the last decade or so. When I lived outside Newcastle the Quayside was a bit sleazy and run-down but it's nothing like that now, lots of remodelling of the old buildings to retain the Georgian and Victorian facades but put to new purposes, such as the old Fish Market now being a nightclub. Lots of buildings seem to be clubs and bars down there, or the restaurants you need to line the stomach before boozing, food from all over the world concentrated in a small area. I loved it. I took lots of photos of the bridges Newcastle is famous for and, when I was lucky, blue skies behind them and reflections in the almost still Tyne river. See below for more bridges. 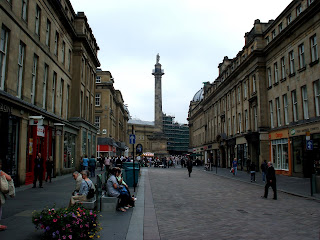 On Sunday evening I wandered down the Quayside in the sunshine, taking photos of the bridges and buildings, down as far as the 'Blinking Bridge', the Millennium Bridge that raises to let ships through to dock and looks like it's blinking. Over the river on the other side of the bridge is the Baltic Gallery and the Sage concert hall. I wandered back along the Newcastle shore and stood watching people abseil down the side of the Vermont Hotel (12 storeys or so) for some unknown reason and suddenly there beside me were Derek and Tracy to look after me for the evening - food and drink ahoy! 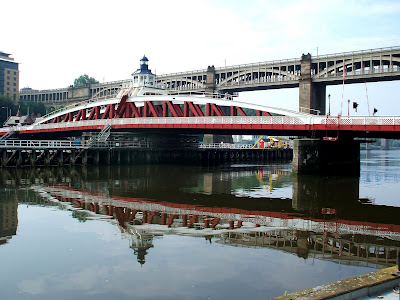 Monday dawned a bit cloudy and hazy but, since I was a tourist in my home town, I got out my shorts and headed into town - that should really be *up* into town since the Quayside is at river level (obviously) and the rest of Newcastle is much higher up a steep incline. It's a heart-attack inducing incline for tubs of lard like me and the locals just loved to rub it in by skipping up and down the hill like frisky lambs (not really). First stop was Fenwicks for a birthday card for my eldest nephew and then breakfast in the cafe/restaurant my parents used to frequent. Then the hard slog of combining shopping with sight-seeing. 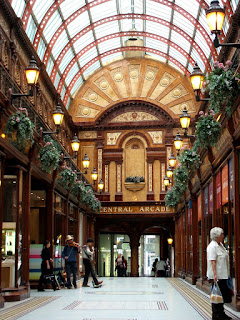 It was nice to wander round with no fixed agenda or schedule to keep to. Newcastle saw the building boom of the industrial revolution and Empire in the 18th and 19th centuries with grand promenades of Georgian buildings long since turned into shops and offices. I walked through the old covered Grainger Market and the ageless brown and cream Central Arcade, up and down Northumberland Street, the main shopping street, dipped my toe in Eldon Square to go to Bainbridges/John Lewis (I bought The Most Beautiful Shirt In The World there last year so I was hopeful, but my hopes were dashed), up to the Haymarket (which is being rebuilt *again*) and all over. I stopped for lunch in 'Collectables', a favourite of Mam's and, later, Dad's. 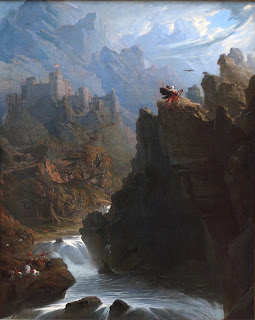 I went to the Laing Gallery, somewhere I haven't been for about 30 years. It's changed, and I'm not sure it's for the better. Downstairs seems to be all shop and cafe and the gallery is now only on the first floor and, given my bad timing, only one gallery was open since they were changing exhibits. But, lucky for me, the painting I wanted to see was on display - 'The Bard' by John Martin, a depiction of the last Bard in Wales hunted down by Edward I. I remember this painting from 30 years ago hanging at the top of the stairs (so you couldn't step back to see it properly) and it left it's mark on me. John Martin, a sort of local boy made good as a painter, had a few other paintings in the gallery and I'm pleased they were still there. 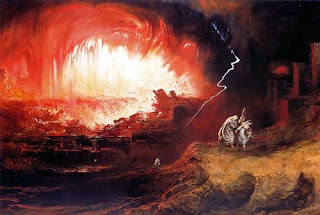 You really need to see the detail of 'The Bard' to enjoy the painting - the endless army of Edward I's winding back into the hills - and the card available from the gallery shop doesn't do it justice. The painting that really jumped out at me on this visit was John Martin's 'The Destruction of Sodom & Gomorrah' with it's raging red furnace at the centre of the painting. It almost radiated physical heat and really caught my attention. Oddly, the shop didn't sell any cards of this painting although it featured on the cover of a book about art galleries in the north. C'mon guys, sell postcards and prints of all your collection - it's not that big a collection really. 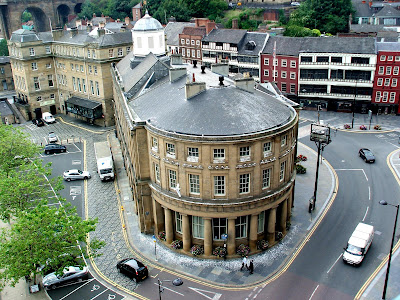 After that I headed back to the river and walked over the Tyne Bridge to Gateshead and along the river bank to the Sage, the new concert hall enclosed by glass on the south bank of the Tyne. I had a brief wander round the public areas of the Sage and decided that I'd like to see a concert there - it's purpose-built so the acoustics must be perfect. I then wandered over to the Baltic Gallery to see the small exhibit of amusing Penguin Book covers by Harland Miller and the odd installation by Sarah Sze which seemed to have been developed as an installation for that specific space. I like it. Bits of wool and string twined around sticks and gaps in the flooring, a fan making paper flutter in the breeze, a series of small boxes spread out on the floor... interesting stuff. 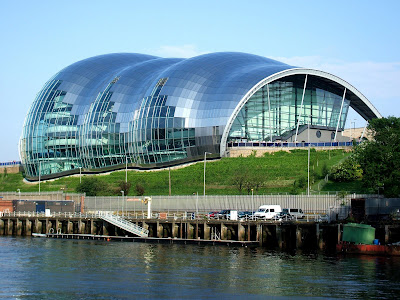 That evening we went to see 'Evita' at the Theatre Royal. I've never seen it on stage before and I'd never been in the Theatre Royal so that's reason enough to see it. Because I'd booked so late we had seats in the stalls that meant we didn't see everything on stage (such as the top half of Eva when she sang 'Don't Cry For Me, Argentina' on a balcony on stage) but it was enjoyable anyway. The bloke who played Che was a runner up in 'Any Dream Will Do' so had a voice, just not the right sort of voice or sufficiently versatile a voice for Che - there was little drama or emotion to his voice (I yearned for David Essex's versions of the songs). Evita was played by the understudy who, in the first half, couldn't decide if she was Madonna or Elaine Paige (certainly not Julie Covington) but settled down into her own style in the second half and was much better. We then went to Fitzgeralds for more alcohol (see? I was forced). 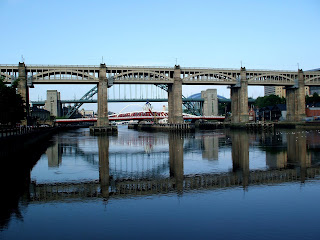 On Tuesday morning, Derek came to the hotel to pick me up to drive me to Alnmouth - lucky for me he had a day off work. Alnmouth was one of Mam and Dad's favourite places so it's nice to visit to say hello and wander along the beach. Alnmouth is a nice little town and the river Aln escapes into the North Sea here after having flowed through Alnwick, scene of the Harry Potter films. It's a nice town and, if I lived there, I'd want to live in one of the houses that overlook the sea to watch the North Sea storms. We then drove down the Coast Route towards Newcastle and to Derek's house to see his tomato plants and ginger puss-cat, called Ginger. The moist smell of the plants reminded me of my Granda's greenhouse on his allotment at Emmaville that was always packed with tomato plants in summer. 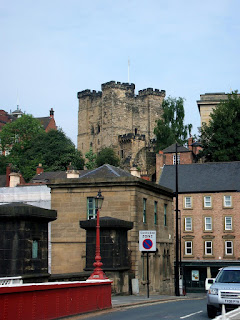 Wednesday morning I braved the steep hill up from the Quayside to visit the Castle Keep (from which Newcastle gets its name) and the Black Gate. The olde castle was a big affair, originally built by the eldest son of William the Conqueror and then rebuilt over the years. Nowadays all that's left is the Keep and the Black Gate and bits of masonry around town. It's built on a high point right above the river (as all good castles should be) and is an imposing sight from down below on the Quayside level. It became the city prison in the 17th century which must've been a bit grim. Strangely enough, I've not been inside the Keep, so that's something for my next visit.

And then came the trek downhill from Newcastle to London and the trip across London in the sweltering heat. It's nice to get out of London now and then. It's nice to see the bridges. I like the Quayside. 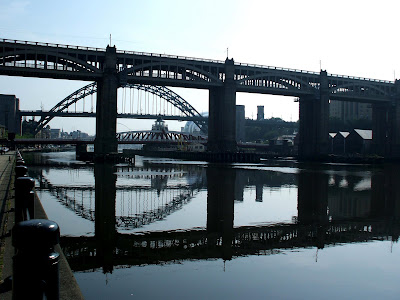 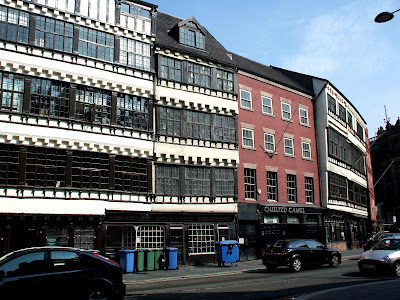 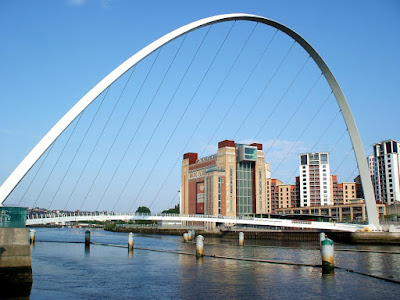 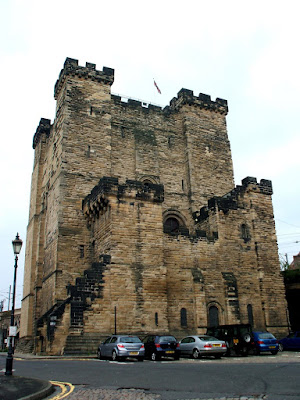 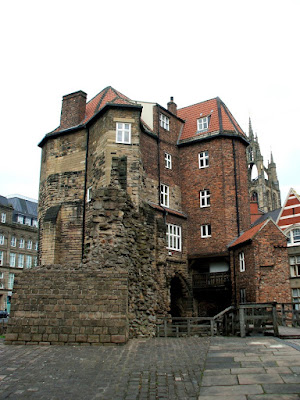 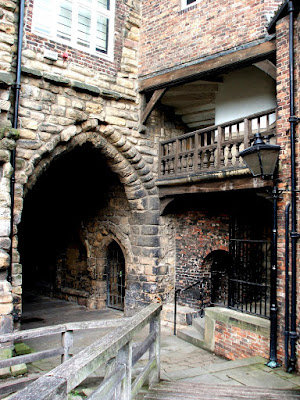 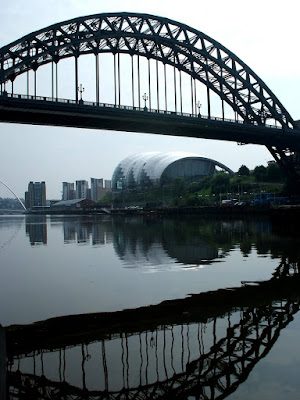 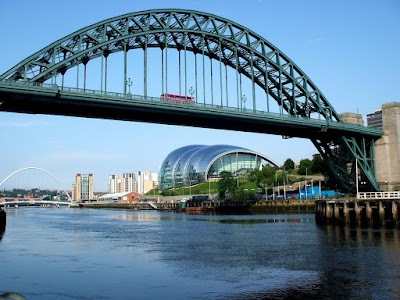 Wow you did so much !!! Looks a lovely place will have to visit one day