Last night Buffy Sainte-Marie played her first gig in London in 17 years to celebrate the release of her first album of new material in 17 years, 'Running For The Drum'. It was obviously going to be a special night for everyone there.

My last meeting of the day finished late and I scurried downstairs to get changed and head off to the gig shortly after 5.30pm, walking around Parliament Square and over Westminster Bridge to the Southbank. In honour of the occasion I wore my Most Beautiful Shirt In The World that's covered in rosebuds in celebration of the chorus of Buffy's 'Generation' - 'I just want to dance with the Rosebud Sioux this summer'.

With excitement mounting we took our seats for Nell Bryden who was opening the show. You know that feeling when you first take your seat and you realise the view you'll have? We were right in the middle of the second row (courtesy of Dawn Right Nasty) with the front row reserved for people in wheelchairs and their friends, so we had a perfect view of the stage, especially since the stage is low. I quite liked Nell, a good voice and some interesting songs but it was only her on guitar and a drummer (with a sadly small kit) so I suspect she sounds a lot better with her full band around her. She's playing in Camden tomorrow - if I lived there I'd probably pop along to see her but I think I might browse her music online instead. She has a great voice, versatile and powerful and probably worth watching. 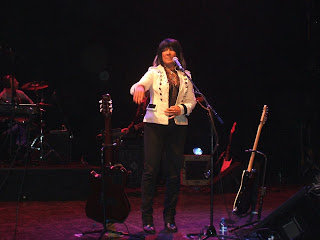 After the interval we took our seats again and waited for Buffy to tread a London stage for the first time in an age. And suddenly there she was, striding out onto the stage with her band and singers (who I think were the Ulali lasses again, like in New York last year) and they went straight into 'Cho Cho Fire', one of my favourites from the new album. It's a great opening song with the line 'Ooo you better wake up, man it's like you're dead and gone...' before heading into a powerful rock pow wow stomp and we're off and running for the drum. This was followed by 'Piney Wood Hills' a total change in mood and pace and the audience loved it. In fact, we loved everything, clapping and cheering before and after songs - in part it might simply be that we so pleased to finally have Buffy on stage in front of us. 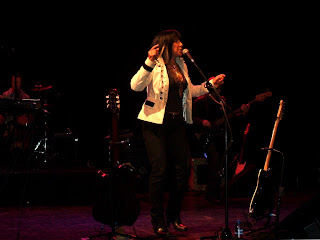 The audience response was quite interesting, with the largest cheers for the classics but clearly enjoying the new songs as well. There was also a feeling of deep respect and joy - I don't know how else to describe it. The deep silence as Buffy sang some songs that I first really noticed when Buffy went over to the Steinway grand piano to play 'Soldier Blue', just her and the piano for the opening of the song and you could feel the delight running round the room and could have heard a pin drop, followed by rapturous applause at the end. That's the first time I've heard Buffy play 'Soldier Blue' and she opened by saying her next song was from a film that was big all over the world but that closed in America in the first few days. She'd earlier played 'He's An Indian Cowboy' at the Steinway, the 'Up Where We Belong' version that finishes with pow wow - I couldn't help but sing along to that one.

I wasn't taking notes but Buffy was onstage for about 1:40 hours and sang (not in this order): 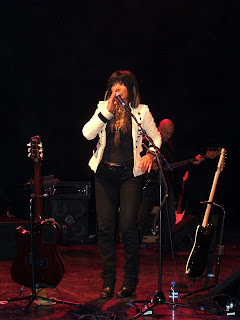 There's something there for everyone from Buffy's 45 years (so far) career. It was a nicely paced set, with wild pow wow followed by something slower, always melodic and always thought-provoking. 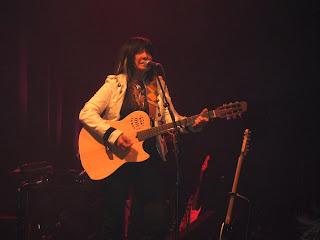 And Buffy has a great stage presence, merrily chatting away to us all after the first few songs, responding to some of the shouts from the audience - we erupted in laughter at her response to a bloke in the audience shouting 'I'll hold it for you' (as her bassist was adjusting the guitar-strap) to which she replied 'So long as I don't have to reciprocate!'. Always a few words about the songs or the circumstances in which they were written - there comes a point when the clever people learn how to make music from weapons; that Joan Baez was singing 400 year old Welsh folk songs and so was Buffy, except she'd written hers two week earlier; how Bobby Darrin sent her 18 yellow roses after recording 'Until It's Time For You To Go' and then reeling off a list of people who'd recorded the song... She's been around, has Buffy, and is part of the history of music, but she's still very much now, still challenging and experimenting, still growing and teaching. And that's good for all of us.

Favourite songs were all the new ones (it's a great album) and in particular 'Still This Love Goes On' which Buffy prefaced by saying it's a song she wrote for herself, and, of course, 'No No Keshagesh' (which I tried to join in the pow wow but failed). 'Soldier Blue' was very special, 'Until It's Time For You To Go' with no sentimentality or slush, just a straight reading of a love you know won't last, 'Darling Don't Cry' and a deeply touching 'Relocation Blues' (by Floyd Westerman) with just Buffy's voice and her fingers tapping out a beat on the microphone. I also loved 'Bury My Heart At Wounded Knee' with its wild, skanking guitar riffs and the marvellous 'Starwalker'. I suppose I loved them all, really! 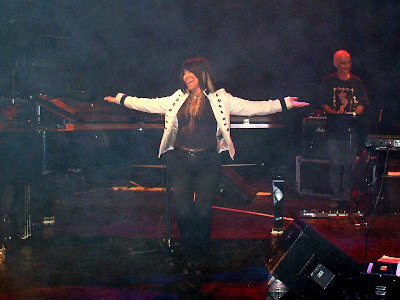 As she left the stage to a standing ovation Buffy cheekily quipped, 'See you in 20 years!' before vanishing. But then she came back for the encore of 'Goodnight', a lovely song in her hands and a perfect closer. Another standing ovation but no Buffy, and on came the house-lights. Phew!

I only took a few photos - I was conscious that, since I was right at the front then the flash would probably disturb others in the audience and be obvious to Buffy, and I avoided taking photos in the 'serious' or love songs. The few I have are here so enjoy them. 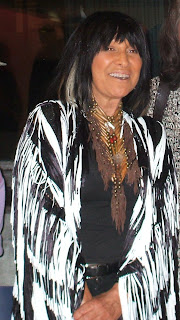 After the gig we queued up to meet Buffy - I was both dismayed and pleased to see how many people were before me in the queue, the queue doubling back on itself since far more people wanted to meet Buffy than expected. Why was I pleased? Because it proves that London loves Buffy - the QE Hall was sold out, that's 900-odd people despite virtually no publicity and there must have been a couple of hundred in the queue to meet her, in front and behind me.

Eventually we reach the front of the queue and step forward, copy of 'Running For Drum' ready for signing and, as she signed it, Buffy said, 'Have we met before?'. I say yes, at the Highline Ballroom in New York last year, and ask her to sign the photo of Buffy and me (which she does with the golden ink pen I bought at lunchtime) . She said, 'O yes, I thought so, what's your name?'. I say Owen. And she said. 'Yeah, I read your blog'.

Eh? What? Buffy reads *my* blog? She reads *this*?? Pride and embarrassment vie for my attention but I'm too busy standing beside Buffy with her hand in mine and Chris on her other side saying 'Cree' as her manager takes our photo (and no, I'm not publishing *that* photo). She also said she thinks she's coming back to London in January but not sure when or where, but I say I'll be there, wherever.

What a way to end the night - not only do I see Buffy in London (previously I've travelled to Belleville in Ontario and New York to see Buffy), but I meet her and she tells me she reads my blog. Gulp. Buffy may well read this review. I thought long and hard about this review before I started writing it and decided I wouldn't let that influence what I write - I know I sometimes go all fan-boy about Buffy but, let's face it, that's part of me and part of previous blogs about Buffy, so why change now?

I had a great night out, amid all the tensions about getting there on time and what would I say if I met her afterwards, but Buffy is a charming woman on-stage and off. She could charm the birds out of the trees. She certainly charmed all of us last night if the standing ovations were anything to go by. Come back soon Buffy!
Scribbled by Owen at 7/29/2009 06:52:00 pm

Aaaah! I wish I could've been there. Hopefully some day soon she'll play in Los Angeles. Thanks for posting your review of one of the greatest singer/songwriters of all time.

There was atmosphere of deep respect and joy in that another and earlier european gig in marvellous Riddu Riddu also.

-is this familiar already:
http://www.myspace.com/buffysaintemarie

In the world of entertainment there is nobody more dignified or graceful than Buffy Sainte-Marie. She has held her torch of freedom and justice as high and steady as the Statue of Liberty, even when the most powerful men in the world tried to shut her down.
Her catalogue of music is unsurpassed in quality. She has back bone and integrity demonstrated by her continuing fight against war and those who profit by war. I have been spellbound by Buffy since I first heard her recordings in the 60s. I will remain spellbound until it is time for one of us to go.
Nick Quebec City