Jessica Ennis CBE and Nicola Adams MBE went to the Palace today to meet the Queen and pick up their much-deserved medals. They both already have Gold Medals from the London 2012 Olympics, obviously, and are therefore heroes.

Here they are with Greg Rutherford MBE, also an Olympian and Gold Medal winner. 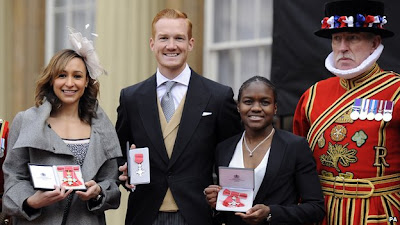 There's also a nice article about Nicola, the first woman to ever win an Olympic boxing Gold Medal, on the Sporting Life site. 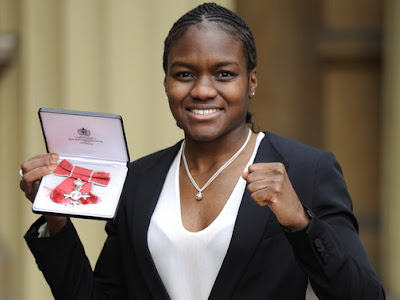 A Typology of Snow 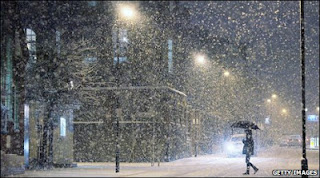 Most people who look at this blog know what snow is, that white stuff that falls from the sky when it's cold. But have you thought about the kind of snow, the type? I have and I offer you a typology of the snow I've observed over the last couple of weeks.

Whenever we get snow in London I feel terribly pleased and privileged since it's such a comparatively rare occurrence. I've always loved snow - I love the changing seasons so how can I not love snow? It not only transforms the urban landscape but it transforms me into a big kid. I'm pleased it does since I'd be terribly saddened if I lost my simple wonder in the white stuff coating the world every now and then.

Over the last couple of weeks I've identified three different kinds of snow:

- Worker snow - that bravely determined snow that will lay down a basic layer of snow that other flakes can build on. It usually comes down in a relentless flurry, heading from sky to ground to coat the wet ground in a basic covering and making it easier for colleague snow to then build up.

- Giddy snow - the kind of snow that can't make up it's mind where to lie - shall I lie here or there? It's generally quite plump and flits from one side of your vision to another, being indecisive where it'll fall, first this way and then that. Once it lies it builds up the depth in any particular pile of snow and helps with that "crump crump" sound when you walk on it.

- Random snow - that's what we've had over the last week, randoms floating down around  with no particular purpose other then to make you think it's snowing when it's not really doing anything. Randoms can be quite fun since they appear out of nowhere and vanish. They don't lie on the ground but they entertain you watching them float around.

Petula Clark - 'Lost In You' 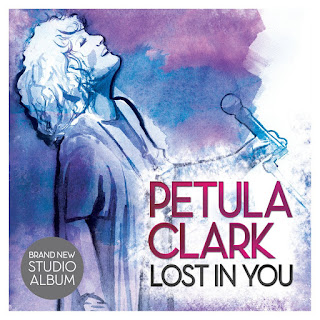 Petula Clark released her umpteenth album today, 'Lost In You', and (obviously) I had to buy it. Petula helped the sixties swing with her classics like 'Downtown', 'I Know A Place' and 'I Couldn't Live Without Your Love' (to name but three) and she'd already been a star in the UK and in France for a decade or two when that happened. She started off as a child star during the Second World War alongside Julie Andrews, and made films and had hits around Europe before 'Downtown' made her a global superstar.

She's always included in the list of those 60s girls like Dusty Springfield, Lulu and Sandie Shaw and all of them faltered in the 70s. Petula took to the stage and toured America in some blockbuster musicals. Throughout the decades she's kept working and still tours - I've seen her play live twice in recent years, the first time in Croydon in 2007.

Pet has been doing interviews and appearances in the last couple of months in preparation for the new record and regaling us with stories from her astonishing career. One of my favourites is how she happened to be in the same hotel as John and Yoko in 1969 and she sang on 'Give Peace A Chance'. How many trendies from the time can say that? Pet's not afraid to rock out either and has recorded a fab version of 'Pinball Wizard'.

Anyway, what's the new album like? It's a collection of new songs and a few cover versions and none of them are what you'd expect from Petula - she keeps you guessing. The record opens with 'Cut Copy Me', the sort of lead single from the album that's getting radio plays and remixes and, after three listens, I've fallen in love with. I love the line, "You're the shore line I see when I'm off course", such an unexpected line that draws you in.

Most of the songs are ballads and mid-tempo, all suited to Petula's voice now, slightly lower in tone but still an effective weapon. I love the almost country-rock of 'Never Enough', her great, measured version of 'Crazy', the tender, autobiographical 'Reflections' with Pet in great voice climbing up and down the scales. I love her version of 'Imagine' which steers well clear of being a tribute song and more a recreation of a classic song. There's something here for everyone.

And yes, Petula re-records her classic, 'Downtown'. Nothing will ever compare to her joyous, exuberant '60s song, the song that turned her global in the 60s but, you know what? Her new interpretation works and I suspect this is the version she'll be singing live in future. It's the same song but her new version is more thoughtful, almost looking back to the days of 'Downtown' in swinging London, a more gentle remembrance and no less a song for it. It's almost a wistful, 'I remember when I was downtown' rather than wanting to be downtown tonight. Give it a listen.

Anyway, take a listen to the TV ad below that features three songs and then download or buy the album. Wouldn't it be something if Petula crashed into the charts with the album or single? Go on, do it!

Email ThisBlogThis!Share to TwitterShare to FacebookShare to Pinterest
Labels: Lost In You, Petula Clark

Buffy at Idle No More, Winnipeg

Buffy Sainte-Marie was a guest speaker - and singer - at an Idle No More rally about the rights of indigenous peoples in Winnipeg. Buffy is still sticking it to The Man.

Buffy has been campaigning and promoting the culture of her people for nearly five decades and is still doing it with dignity and persuasive arguments. She ends her short talk with a rendition of 'Darling Don't Cry', a song based on a Cree round-dance. I first saw Buffy play this song live 8 years ago (almost to the day) in the small town of Belleville outside Toronto in an audience of mainly Native Americans. I still get a frisson of delight when I remember the audience erupting into pow wow singing, joining in with Buffy. It was an astonishing moment.

Here is the long awaited video for 'The Bed Song' from 'Theatre Is Evil' along with a new version of the song that Amanda has just released.

I first heard the song 3-4 years ago when Amanda played it live on the Jonathan Ross radio show one Saturday and was delighted when it turned up on 'Theatre Is Evil'. And even more delighted when I saw her play it live last year at her Art Show in Shoreditch. It was also one of the highlights of her show at Koko in the Autumn. It is a lovely song.

There's been a lot in the news about nurses and the National Heath and how caring for people seems to have left the system. I've just watched yet another discussion on telly blaming it all on "form filling' and "workload". I won't claim to be an expert on nursing practice but in the last 12 years I've had four operations in hospital and both my parents died in hospital. I've seen nurses and nursing assistants up close.

I'm terribly lucky to live in a country that has the National Health Service and I have quality health care as a right. I've certainly had my share of medical support in the last decade and it's not just the operations it's the follow-up support and treatment, the physiotherapy and the medication. Yes, I am very lucky. On the other hand, I've paid for it through taxes over the last 30-odd years. 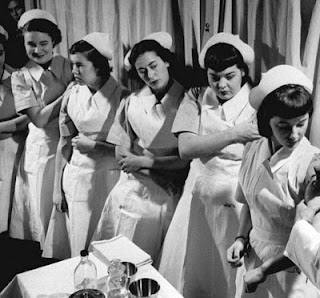 I've seen good nurses and I've seen mediocre and unthinking nurses. More of the latter, sadly, but at least I've not seen any 'bad' nursing of the kind that's hit the news. In my experience it's not about "form filling" or "workload" or lack of role models or whatever excuses are offered - why do you need a role model to take a glass of water to someone who's thirsty? Something has changed in nursing, medicine and care and I don't now what it is.

A memory of nursing that stands out is when I was bedridden in hospital for a week after an operation for a slipped disc that could've gone better. One day I was being given a bed bath by, I think, two nursing assistants when the curtains around my bed were opened and two other nursing assistants came in, leaving the curtains open and started chatting about what had happened at a party the previous weekend.

After a minute or so of seeing other people walk past the open curtains while they chatted I said 'Excuse me' - that's all but it was enough. I could see the sudden realisation of what they'd been doing flit across the faces of the two interlopers as they realised there was a real person in the bed that could both see and hear what was being said. They didn't quite blush but apologised and left, closing the curtains. Having interrupted their chat, the two nursing assistants finished off the bed bath in a rather perfunctory manner, pulled the curtains back and went off to finish their chat.

That's hardly an earth-shattering experience and didn't lead to me dying in hospital through dehydration but it's symptomatic of a system not working quite right. At that point in time, those four nursing assistants wanted to chat about a party rather than do their job. "Form filling" wasn't involved and they weren't over-worked or stressed since they had time to chat and laugh while a patient was having a bed bath. It may come as a surprise to some of you but bed baths aren't something most people are brought up to consider normal. They're not terribly stressful but it's not normal. And I'd rather not have an audience, thank you.
Scribbled by Owen at 2/07/2013 10:22:00 am No comments:

I've just found this video on YouTube and had to share. It's a video of Buffy singing 'Generation' from the album, 'Buffy', that I saw her play at the Queen Elizabeth Hall in London last year. It's not part of her 'usual' setlist but she played it that night. I'd never seen her play it live before so I was over the moon since it's one of my favourite Buffy songs.

I first heard the song way back in 1975 or 1976 featured in a BBC2 programme and it stuck in my mind for three decades until I was given the 'Buffy' album for Christmas a few years back and I could listen to it whenever I wanted. That was a very special Christmas present. It was subsequently released on the triple album from the '70s, 'Buffy/Changing Woman/Sweet America' (or 'Buried Treasures' in America).

I just want to dance with the Rosebud Sioux this summer ...