'The Mikado' at The Coliseum

Last week we went to see Gilbert and Sullivan's 'The Mikado' at The Coliseum. Now, I'm not a great fan of light opera (or opera for that matter) but I fancied seeing some G&S and 'The Mikado' is one of their biggest so it made sense to see it. I remember my brother being in it at school - and, I think, they did 'HMS Pinafore' - but by the time I reached the Sixth Form we were too punk to do soppy G&S. Anyway, I'd sill like to see some more G&S. 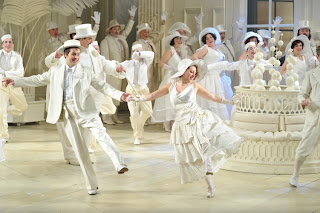 I've only been there a couple of times before, but I quite like The Coliseum. It's a bit grand and a bit posh and that's reflected in the clientele, with a range of home counties cut-glass accents and mostly old fogies - we were probably in the younger third of the audience.

The curtain went up on a cream set that we had for the entire show, everything was cream coloured from the walls and floor to the limited furniture. It set a nice backdrop to the largely black and white costumes of the cast. That created a nice dramatic picture at first but as scene followed scene and everyone was still in black and white it lost it's edge a bit. The only thing that alleviated it in the first act was Nanki-poo wearing a brown striped blazer. 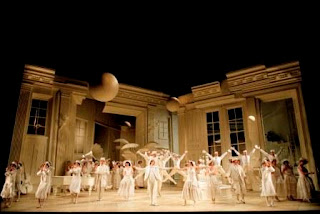 I also lost it slightly with the singing. Well, more than slightly. I should've taken the hint that it was playing at the home of the English National Opera so the singing would be full opera but I always seem to miss that detail. I'm not a great one for opera - mainly because I can't understand what they're singing about. That was definitely the case with 'The Mikado' when I spent more time reading the songs from the display above the stage rather than watching what was going on on stage. Some of the lyrics are very clever but I couldn't make out head nor tail what the singers were singing about, especially the women who seemed to have 'artistic warble' down to a T. Of course, we had Alfie Boe as our hero Nanki-poo so a goodly part of the audience was there for him.

I enjoyed the production (which is 25 years old this year) and it all seems great fun but rather too stylised in it's black and white glory and opera singing. I'd like to see it with the characters in Japanese costumes and with musical theatre voices where I can understand the words. As I say, I'd still like to see some Gilbert & Sullivan. 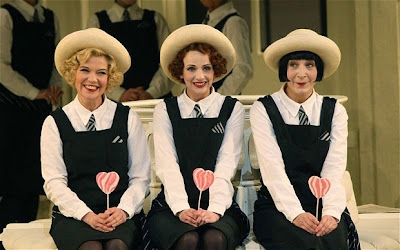