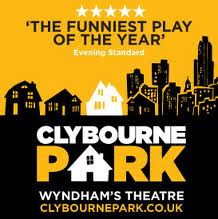 Last night we went to see 'Clybourne Park' at Wyndham's Theatre in the West End and I'm very pleased we did. It won the Olivier Award for best play last week, so it was nice to find out what the fuss was about.

Clybourne Park is a district in Chicago in the late 50s, pretty houses full of middle class white folks but the house the play focuses on has seen tragedy and the son of the house has committed suicide following his return from the Korean War. The parents want to move away from the memories and it turns out that the family buying the house are black, the first black family to move into the neighbourhood. The neighbours want to persuade them not to sell and the scene is set for a drama of complex emotions. The second half is set 50 years later when a white couple want to move into what is now a black neighbourhood and re-build the house and we see a mirror of the discussion and arguments of 50 years earlier.

There's a lot more going on in the play than a depiction of racism in otherwise liberal folks. There' s a discussion about the gentrification of inner city areas, of personal integrity and of personalities. The first half is almost a comedy of manners set in 1950s American suburbs in which everyone is pleasant to each other as a matter of course until the father snaps and dares to swear, the ultimate taboo in polite society. Swearing in the second half is rife, with 'fuck this' and 'fuck that' being bandied about with gay abandon. There's a lot going on and I won't try to capture it all. 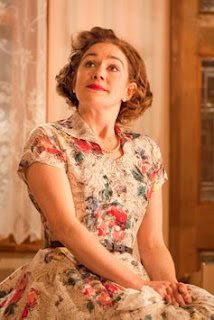 I thoroughly enjoyed the play with its mix of cringe-making awkwardness and the ribald laugh-out-loud humour. I never read reviews before seeing a play so wasn't aware of the rudeness of some of the jokes or, the killer joke, 'Why is a white woman like a tampon?'. I'll leave you to see the play to find out the punchline to that one.

The acting was superb, with the actors playing different characters in both halves of the play. I was particularly taken with Sophie Thompson who I've seen in a couple of plays before but she was masterful in this one. She was a delight as the 50s mother whose non-stop talking must have contributed to her husband's mental state. I'd also single out Lorna Brown as the servant in the first half and the community representative in the second and who mouths the killer joke. The accents were great and didn't drop once. All the cast were excellent, delivering totally believable performances and making the leap from the surface gentility of the 50s to the more relaxed 00s with ease. Well done to all.

Last night ended with a Q&A with the cast and director so it was nice listening to them talking about the play and their roles. Of course, we got the usual 'I'm going to talk for ages so you can see how clever I am' and the 'this can only possibly be of interest to me but I'm asking anyway' questions. I've yet to attend a Q&A that was worth it - because of the audience and questions - but hey ho, that's the typical Q&A.

If you get the chance, go and see this play. There's something in it for everyone, with a multi-layered script and plot and some really great performances. I thoroughly enjoyed it. 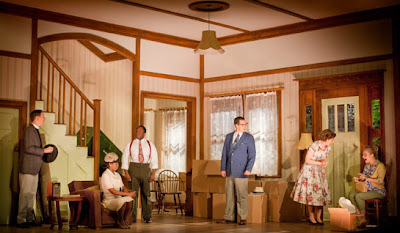 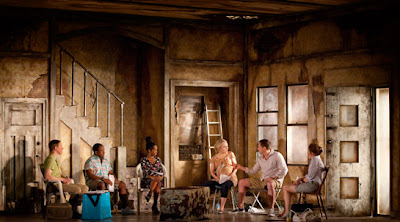 The tampon line is worth the ticket price alone