Have I got your attention?

It was a surprise to hear of the death of Jane Russell this morning. I won't claim to be a fan or anything, and, to be honest, I didn't even know she was still alive, but it's sad nonetheless. I grew up with Jane appearing in films that were invariably shown on a Sunday afternoon so it was odd to hear the news reports starting off with the words, 'Sex symbol, Jane Russell, has died ...' or words to that effect. It made me think (and that's generally dangerous).

'Sex symbol' is an odd phrase. It sort of boils someone's life down to being a sack of flesh filled and bulging in the right places, nothing about talent or skill, just being born with the right shape. Of course, these days, the right shape can be bought, but not back then, or at least not easily. I think of Jane Russell as an actress with a sharp wit as well as big boobs. Not a great actress, but more than a sack of flesh.

That led me to thinking about my recent trip to Florence and being surrounded by nude statues and paintings all over the city when being naked didn't necessarily equate to sex. The human body can be beautiful without being arousing or sexual. Is there anything more beautiful than the human body? 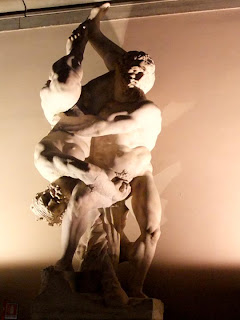 It did make me start to wonder whether advertising is really affecting how we view the world and the people in it. Now, I don't really expect every woman to have breasts like Jordan but they all seemed so pubescent in the statues I saw - am I unconsciously assuming big equates to 'normal'? Similarly with the male genitals, or perhaps I'm just feeling superior in comparison.

Even I've got confused about what I want to say. But it gives me an excuse to post this photo of Hercules having his testicles grabbed during a wrestling match. Big body, small genitals. I don't know who he's wrestling or why it's acceptable to grab your opponent by the balls before he throws you to the floor, but I felt a need to share. I also felt a need to say 'ouch'.

I suppose what I'm saying is that it's sad for anyone's life to be boiled down to being a sex symbol. Jane Russell was 89 and was a sex symbol - as opposed to being an actress - for just a few years. Despite the nakedness of previous ages, we seem to have perfected the art of naked equating to sex. It doesn't, but it seems to be locked into our minds and that's sad. One of the most beautiful things in the world and we're not allowed to enjoy looking at it - the bodies of our fellow people. I won't include myself in that (you really don't want to see me naked, honest).
Scribbled by Owen at 3/01/2011 08:46:00 pm