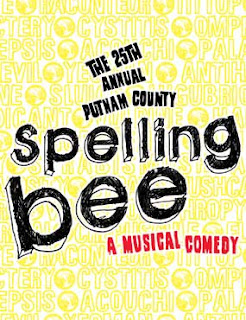 We went to see the 'Spelling Bee' at the Donmar on Tuesday night, a new musical based around the characters taking part in a 'spelling bee' competition (I've got no idea why a spelling competition is called a 'bee' and that wasn't explained). It's a straightforward tale of the hosts and competitors telling their stories in-between the spelling competition, with four members of the audience being invited onto the stage to take part as well. This leads to lots of ad libs by the two hosts at the expense of the audience members.

It's quite short, at just over 1:35 hours (so no interval), with a bit of exposition, a song from each contestant about their past and hopes for the future, and some spelling (I suspect they'll change the words regularly to spice it up). One by one the children spell a word incorrectly and leave the competition and the stage, whittling it down to the last two and, of course, the last two are lonely teenagers who become friends and more as Olive makes a silly mistake and the boy (whose name I can't remember) has a chance to win – she looks at him and says 'I don't mind' and he wins. In the finale each of the characters tells us (through song) what they go on to do in the future.

I suspect this play is a bit like Marmite and you'll either love it or hate it. I loved it and would happily see it again. I thought the players were excellent (and no, they weren't really children, one of the boys looked like he's started going bald), getting that adolescent competitiveness just right, uncertainly about themselves and their futures and the commentaries on their home lives. Some of the songs were over-long but I can forgive that. Katherine Kingsley was the hostess and previou spelling bee winner and enthusiast and Steve Pemberton played the word reader, coming in with a nifty line in patter for the audience members and a nice sarcastic twist to the definiations of the words. Well done to all and, if you get the chance, I'd recommend seeing it.

And yes, I am still on the aeroplane while I write this... another five hours to go. 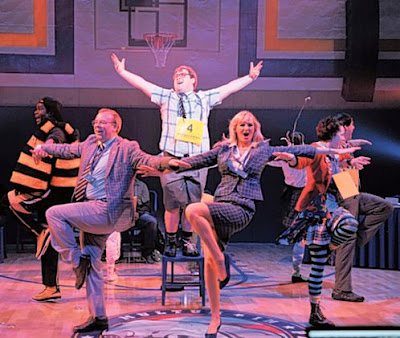