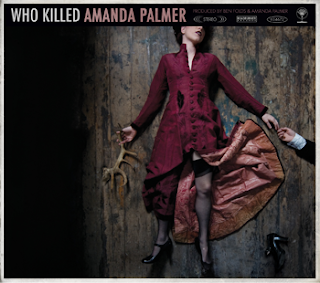 The first solo album from Amanda Palmer was released this week in physical format but has been available digitally for a couple of weeks as part of the pre-order packages. Naturally, I pre-ordered so have been enjoying the songs as part of my convalescence. Some songs are immediate and others are slow burners, gradually growing on me and the process is now completed. I've been meaning to blog about the album but didn't know what to say about it except I want to say more than a fan-boy 'wow, it's amazing'. It is amazing, but then you already know that, don't you?

Songs of joy and sorrow, laughter and melancholy, they're all here with Amanda's marvellous voice and words, all piano based but often enhanced with strings and brass and even guitar. I've had the pleasure of seeing Amanda play some of these songs and have listened to live versions of a couple of them for a year or so. The production is spot on with some great string arrangements that bring a bit more light and shade to the songs but it's very delicately handled and not intrusive at all.

There are manic stompers like 'Leeds United', 'Runs In The Family' and 'Guitar Hero' alongside more introspective and calmer songs such as 'Ampersand', 'The Point Of It All' and 'Blake Says'. Drama and frivolity, it's all here. And it wouldn't be an Amanda album without some oddities like 'What's The Use of Wond'rin'' and the juicey 'Oasis' that tells of schoolgirl rivalries in the '90s (don't worry, I'm sure you're not a crack whore, Amanda). Images tumble from the record along with sensuous melodies and some wonderful piano passages, particularly the beautiful introductions to 'Ampersand' and 'The Point Of It All'.

If you get the pre-order then, as well as the album, you get two bonus tracks: 'I Google You (Live)' and 'Straight (With Strings). If you look on iTunes you can also download 'Leeds United (Lounge Version)' and 'Guitar Hero (Alternate Version)' - both are well worth downloading and enjoying. 'Leeds United' is supposed to be the first 'single' from the album so there may be more songs available to download as 'b-sides'. Another downloadable CD will be available before Christmas with demos and out-takes from the album as part of the pre-order package.

I haven't had the physical record in my hands yet but when it arrives it should be signed by Amanda - that's part of the pre-order. It may be one of these: 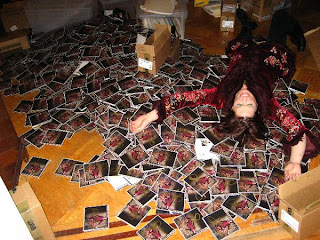 And if you'd like to listen to a song from the album just click below and wallow in the glory that is 'Ampersand'.