The power of the Internet and the blogosphere never ceases to astound. Just when I get jaded about it something happens...

Last year I blogged about Jane Aire & The Belvederes and every now and then someone leaves a message about Jane, one of which pointed me to what Jane is doing now and then, a while later, I even had a message from Jane herself. Isn't that great?

Well, it's happened again, but this time following my blog about Lynsey De Paul earlier this summer. I plaintively asked for anyone with an mp3 of 'Central Park Arrest' by Lynsey to get in touch and what happens? Someone has. And I'm listening to the song now!

To celebrate, here's a photo of Lynsey in a park from way back when and an advert for the Thunderthigh's version of the song that was released as a single in 1974 - "Thunderthighs are gonna crush ya!". Isn't it amazing what you can find on the interweb thing if you ask the right question? 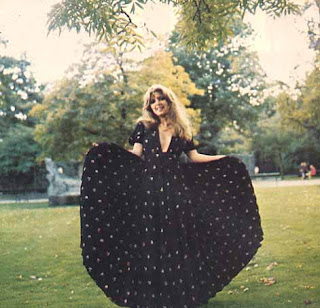 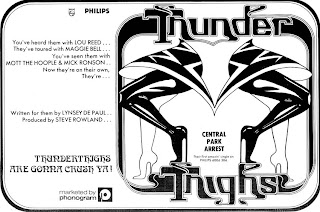 I would be utterly utterly happy if you would like to share the mp3 of Thunderthighs with me. I've been vaacuming the net and all available download stores without any luck.