Friday saw the end to work for the year at lunchtime followed by a trip to the Winter Wonderland at Hyde Park. I was sort of expecting it to be laid out like a village covered in snow which it wasn't, no snow in sight (sigh) and the rides and German market stalls were along the main path and around the bandstand. And, naturally, I go to an outdoors event on the coldest day of winter so far, my fingers soon freezing through my gloves. But that added to the charm. 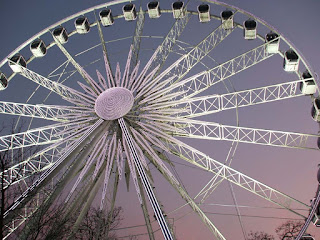 First off was a trip in the Great Wheel to see the sights of west London before it got too dark. We'd timed it just right to avoid queues and see the sky begin to darken and change colour as dusk fell and the sky turned pink over Kensington, with the Serpentine reflecting the sky and the lights from the funfair below gradually becoming brighter as the world became darker. I'm not very good with heights at all but the little six-person pods were fine and we went round about four times (I think) seeing the sky and light change each time. 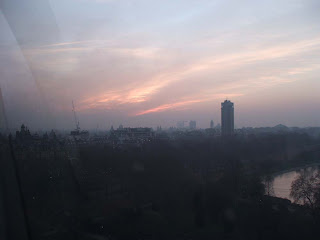 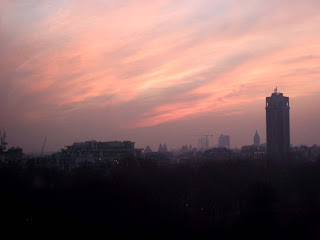 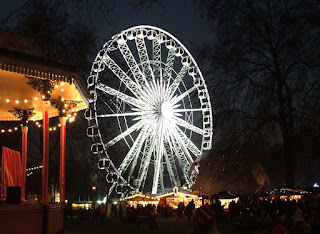 By the time we got off and walked round the icerink and small funfair it had become dark so we headed to the German market stalls around the bandstand. Selling fancy goods and food there was something there for everyone. We had a plate of fried sliced potatoes (real crisps) as we wandered round gawping at the lights, the decorations and the stalls and at the last stall I invested in some healthy, brightly coloured sweets that reminded me of Sweetieland from 'Nutcracker!'. 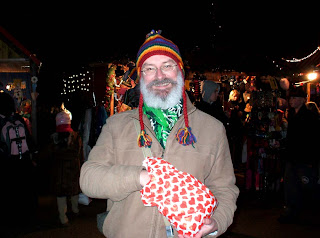 Scoffing sweets by the handful I accidentally went back to the hat stall to investigate the gloriously colourful hats and fell in love with a rainbow hat with earflaps and pigtails to tie it under the chin. My flat cap keeps the top of me head warm but not the back or sides or ears. And it was handmade in Nepal (always a selling point for me). I *needed* that hat. So I asked the lady to pull the tag off so I could wear it instantly. And I did. I'm looking it now, as I type, and can't help but smile - it's a magic hat and the world would be a much better place if everyone had a magic hat.
By this time it was freezing (so it's a good job I had a hat on) and my fingers were going numb inside my gloves so we headed to the refreshment tent for a warming drink - and promptly went to sit outside nursing the hot cup and watching the crowds mill around and the lights of the big wheel turning round. Watching breath mist, supping a hot drink, smiling and watching people enjoy themselves on all sides felt very Christmassy. And then came the carousel. 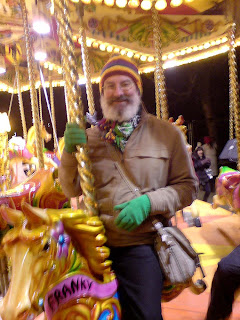 I like carousels, I like the idea of them, the colour, movement and lights, but haven't been on one for decades. Watching it go round with as many adults as kids enjoying themselves was a lovely sight, only bettered when I got on, chose Franky as my mount and hung on as it started to go round, pick up speed and Franky started rising and falling as she galloped around the carousel. I was grinning like a loon and singing along to John & Yoko's 'Happy Christmas (War Is Over)' as we whizzed round and round with me as a big kid in me magic 'at. I don't know what it was, but I had the time of my life on that carousel for five minutes - I loved it! *That's* what I want for Christmas!
And then it was time to leave, with lights twinkling in the trees, the sound of children and adults running round and making noise, heading out of the park and the sounds of traffic taking over. I was freezing, fingers feeling numb but with warm ears (me 'at at work), eyes a-sparkle with the magic of Christmas... I'd been in Wonderland and what a great way to jump into the festive season with both feet!

Later on, after visiting various shops for last minute picking up and putting down and in we go to HMV and I head straight to the back to pick up the latest Sugababes single. As I headed towards the till I heard the music in the shop for the first time, and they'd just started playing 'Up Where We Belong' by Warnes and Cocker, a Buffy song of renown, and Chris pointed out a big poster of SLADE under a star that I'd scurried past and not noticed. The poster showed the Lords of Noize in their heyday and there was an even bigger one behind the bank of tills. SLADE and Buffy together on a magical day? What could it mean? 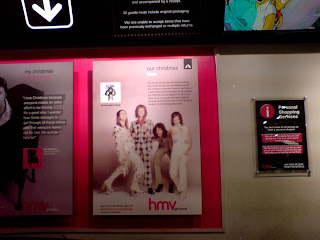