Tonight was the long-awaited Human League gig at Hammersmith Apollo to witness them playing 'Dare' in its entirety. 'Dare' is their 1981 album that saw them go huge with the single 'Don't You Want Me'. But, of course, you know this. 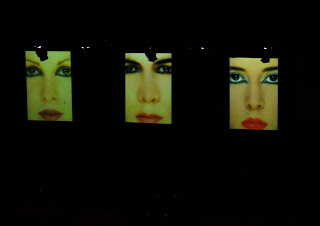 I'd been fascinated by the Human League since taping 'Being Boiled' from the John Peel Show in 1978, and I'd never heard anything quite like that before. Much as I love the early stuff from 'Reproduction' and 'Travelogue', the Human League became a different entity when Phil discovered make-up and interesting hair and Susan and Joanne joined and they unleashed 'Dare' and those classic singles on the world. 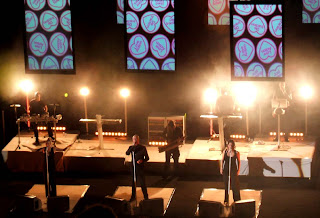 And so to Hammersmith and an audience mainly of a certain age. I didn't see the support act but went in to find my seat when the stage was set and waiting, a white curtain with the iconic 'Dare' images of Phil, Susan and Joanne, and three white areas for each of them under their images. A minimalist black and white set with a white stage for the musicians behind the singers. Movable projection screens and lights, lots of lights. 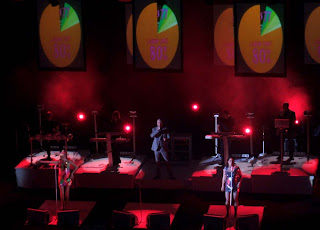 There they were, striding onto the stage all dressed in black and launched into 'Dare' starting with side 1 track 1, 'The Things That Dreams Are Made Of'. And off they went, playing the album from start to finish. After 'Don't You Want Me' they went off, leaving the band to do an amusing instrumental before returning with 'The Lebanon' and going into a greatest hits spectacular, dressed more colourfully with Phil in a light grey suit and the lasses in sparkly spangly cocktail frocks, showing off a bit of leg. The band were tight and the sound quality was excellent. Throughout the show Phil strode back and forth across the stage then joined the lasses for a while before striding off again. The lasses stayed on their white oblongs most of the time (probably to avoid bumping into Phil!) and were marvelously co-ordinated. 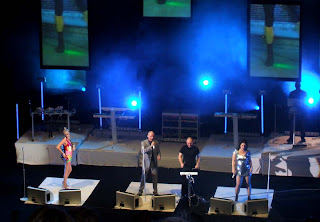 Then back for an encore of 'Being Boiled' (wow multiplied to the power of a zillion), brooding, with dark atmospheric lighting and images of Nazi rallies on the screens, the joyful 'Together In Electric Dreams' and finishing with 'Mirror Man'. The ending was slightly marred when a yob got on stage to pick up Susan and twirl her around, with security very slow to react and pull him away from her. They were on for an hour and a half and it went surprisingly fast. But it was heaven. 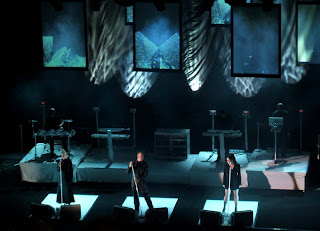 Highlights for me were the opener, 'The Things That Dreams Are Made Of', a wonderfully optimistic song that, in remixed form, is their new single. I love the line in the chorus that lists some of the things that dreams are made of, 'Norman Wisdom, Johnny Joey Dee Dee, good times'. 'The Sound Of The Crowd' joining in on the backing vocals, especially the orgasmic 'Oh Oh Ooohhh's. The pounding electronic beats of 'Second' during which the last few seated people were forced to their feet. 'Don't You Want Me' was, as you'd expect, a thorough crowd pleaser and when Susan sang her verse it felt like she was singing to us, how we'd put her where she is now and, of course, we have. I was quite touched. 'Love Action' was fabulous and I surprised myself by singing along word-perfect to the rap in the middle. 'The Lebanon' is a long-time favourite and it was great to have that riff ringing out. And encoring with the magnificent 'Being Boiled' and listening to the voice of Buddha...

Sounds fantastic, I'm getting to see them tomorrow.