'Legally Blonde' at The Savoy Theatre 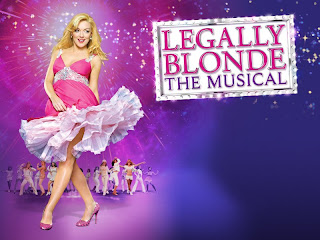 We got there just in time to pick up tickets and then descend the 75 steps across several staircases to go down into the bowels of the earth under the Savoy Hotel to the stalls of the theatre. Amazingly, the stalls bar was shut (I suppose they make enough on the ticket prices to not miss the price of a few beers) so we took our seats in the ornate theatre and waited for the curtain to rise... which it did, on pink. There was a lot of pink in this show.

The story is remarkably faithful to the first film, the story of Elle Woods losing her love to Harvard Law School, following him there and taking on a big case which she eventually wins. Except it's full of song and dance routines, of course. I have to say that the music and songs aren't particularly memorable - sitting here typing, I can't remember a single song. I wasn't impressed on the night either and didn't fork out for the cast recording, often a telling sign for me. But, as with the film, I enjoyed it, a piece of feel-good fluff with some good performances (if not good songs) and I loved the 'Greek chorus' that followed our heroine around and popped up every now and then for a song and dance spectacular. 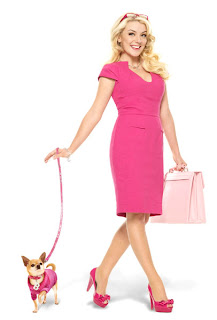 The undoubted star of the show is Sheridan Smith who I last saw in the Choccy Factory's revival of 'Little Shop of Horrors' and who impressed me by crying, unaided, on stage during one song. She has a great presence and good stage voice and what I can only think of as a cheeky stage presence - you know she's there and you know she's teasing you in some unfathomable way. I like her. 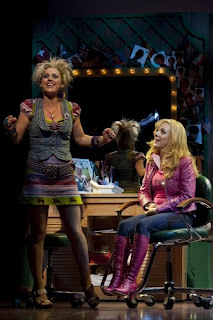 Of course, most people (including me) will know Sheridan from her telly roles in 'The Royale Family' and 'Two Pints Of Lager', just as we all know Peter Davison as Doctor Who from the '8os and Jill Halfpenny from 'EastEnders' and 'Strictly Come Dancing'. I was pleasantly surprise by Peter Davison who played the law professor who fancies Elle, surprised by both his presence on stage and his singing voice (I use the word advisedly). And I thought Jill was excellent as Elle's hairdresser friend, great singing and dancing, never dropped the accent and brought some real pathos and light to the part. Jill is a local girl made good so it's mandatory to like her, especially with such a heart-warming performance.

All in all, I enjoyed the show, very slick and professional (as you'd expect) with some nice performances. Being built in the bowels of London in the 1880s means there's not much space downstairs in the bar or corridors but they give good measures of red wine so that's okay. It's not a show I'd go back to see again and again, but I'm pleased I've seen it.
Scribbled by Owen at 8/09/2010 11:13:00 pm

There was heaps of red wine in your glass!!