'The Renaissance Nude' at the Royal Academy 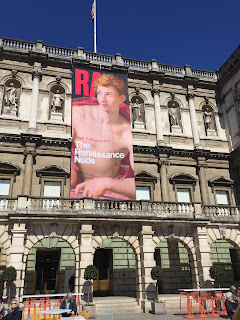 The main exhibition at the Royal Academy at the moment is 'The Renaissance Nude'. It's quite a small exhibition up in the Sackler Galleries but it's also really interesting. I vaguely expected it to be full of Florentine paintings but it wasn't, there were probably as many works from the Northern Renaissance - from Germany and the Low Countries - as there were from Italy. That in itself is to be welcomed since it's quite unusual to see so many Northern works in an exhibition not specifically dedicated to them. It was also nice to see so many engravings and drawings as well as paintings and, with a few exceptions, all were new to me so it was nice to explore new works (new as in over 500 years old but new to me, of course). 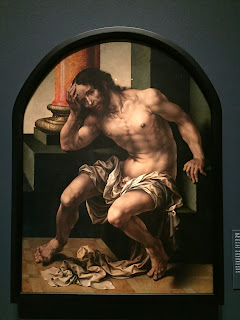 The first painting that made me take a second glance was 'Christ on the Cold Stone' by Jan Gossaert. It looks rather Italian with the figure, the pose and the column in the background, but he was Flemish. The body is far more athletic and anatomically correct than many Flemish works and the simple fact of an exposed torso marks it as a bit different.

I like the highlights over the chest and shoulder and the rather improbable highlight over his belly but that lends an emphasis to the stress and tension in the pose. The musculature of the left arm is very realistic, more so than the multiple abs on the stomach. The body is quite different to another painting by Gossaert in the exhibition of 'Hercules and Deianira' that he completed 13 years earlier demonstrating how Gossaert's grasp of anatomy had significantly developed. 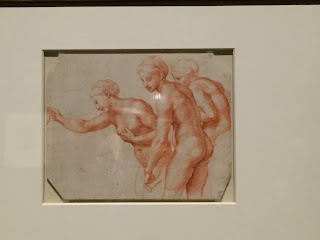 There are some drawings by Raphael, including 'The Three Graces' that includes three studies of a woman in different positions, pulled together. It's done in red chalk on paper and there's not a smudge in sight - these masters were trained properly back in the olden days. It's not very big and I suspect any gallery around the world would be happy to hang this drawing on its walls.

This study was included in the exhibition of Raphael's drawings at the Ashmolean in Oxford a couple of years ago. According to the catalogue the central figure was drawn first, the figure to the left was done next and the final figure on the right was added last. I wonder how long this took Raphael to draw?

Another drawing that caught my attention was simply called 'Reclining Male Figure' by Parmigianino. I don't know if it was study for another work or painting but it's an impressive work, with the man clearly lying down (look at the shadows on his body and around him) and almost as if he's about to start stretching. I'd be delighted if I could draw like this. 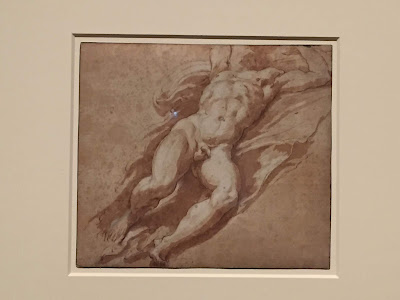 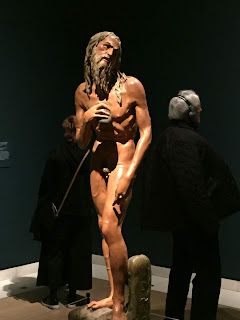 The exhibition doesn't just include paintings and drawings, there are also other artefacts depicting nude figures such as miniatures in books, metalwork and one statue. Not just any statue, this is a Donatello statue from the 1460s of Saint Jerome, clearly a penitent Jerome.

The statue is life-sized and depicts a thin, realistic body, not the idealised bodies of Greek and Roman statues. Donatello is trying to depict an average middle aged man, reaching for the realistic to let viewers know that this could - and perhaps - should be them in their devotion to their religion. It's almost like it's a body in pain or some kind of stress, particularly with the harsh angle of the head. I'd love to know what the person who commissioned this statue actually wanted and specified in the contract for it. 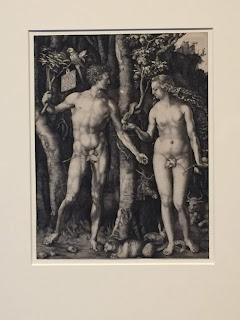 There are a few engravings by Durer in the exhibition and my favourite was his 'Adam and Eve' from 1504. Adam and Eve were popular choices for artists since they could show both genders and the differences in body shapes with Adam generally being muscled and Eve more voluptuous. There is usually some strategically placed foliage to cover the genitals and, in this engraving, somehow the participants have managed to stand behind stray branches with some small leaves to cover the offending articles.

With Durer it always pays to look at the detail as well as the overall composition. See the serpent putting the apple into Eve's hand, the goat hiding behind the tree under the serpent and what's that little mouse doing between Adam's feet?  There's story-telling going on here but there's also decoration to ensure that buyers were happy they were getting their money's worth when buying a copy of the engraving. 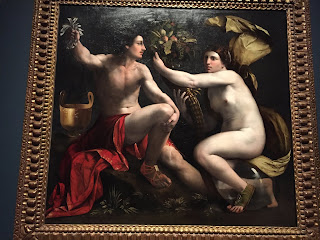 Another painting that caught my eye was 'Allegory of Fortune' by Dosso Dossi in 1530. The male figure is holding a sheaf of lottery tickets in his hand while the female figure sits on a bubble that could explode at any time. The figures are ok but what I noticed when I took a second look at the painting was the great musculature of the lad's right thigh - look closely and you can see the very slight bulge of the thigh muscle, a realistic muscle that any young man would have rather than an over-worked and extreme muscle that some artists would paint. It's really subtle and that's what impressed me about these figures.

I'll include a final painting for it's oddity rather than any beauty. It's called 'Lovers in an Interior' attributed to 'Jacometto Veneziano or close follower' from 'before 1497. The figures are ok but nothing special but what is odd is the inclusion of the glass of water with a sprig of some plant in it in the bottom right corner. What's that about? Placing stalks of some plants in water encourages them to root so is this some sort of allusion to fertility and maybe this couple are hoping for children? Or something like that? All very odd. 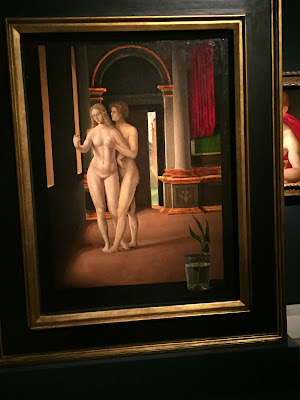 So there you are, some thoughts on the exhibition. Loads of works I'd never seen before and some artists I've never heard of but have now. It's a small exhibition but it's interesting and worth seeing if it's your kind of thing.