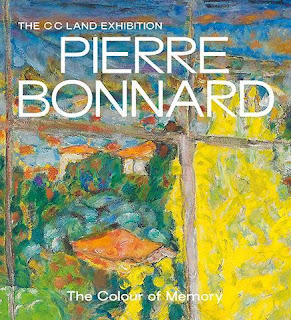 The big exhibition at Tate Modern at the moment is all about Pierre Bonnard, the first major exhibition of his paintings in the UK for 20 years. The exhibition is subtitled 'The Colour of Memory' and that's what it's all about - colour. Bonnard is in a strange position of not being amongst the top flight of painters but he's still worth knowing. He's not in the same league as Picasso or Matisse or Kandinsky or Klee but he's still up there in the 'B' team and worth seeing and appreciating.

His themes tend to be what I think of as 'domestic' - interiors, gardens, his wife taking a bath, that sort of thing. Occasionally a full landscape or a portrait. His figure paintings leave something to be desired but it's interesting that he and his wife took photos of each other naked as Adam and Eve as the basis for possible future paintings. He seems to have been keen to be a Bohemian and that undoubtedly helped him. 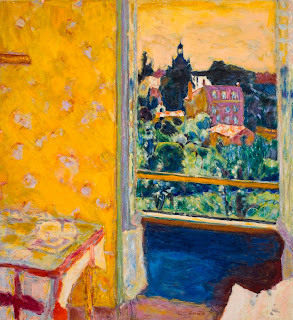 One of the quotes on the walls stated: "Certainly colour had carried me away. I sacrificed form to it almost unconsciously." Bonnard said this when he was in his mid-40s in 1912 and you can see it in the splurges of colour all over his paintings, particularly his paintings of landscapes and gardens. His splurges work very well, suggesting aspects of the landscape that you weave tales around and get lost in.

He also seemed to like painting rooms of his house looking out into his garden and the landscape beyond. There are quite a few of these paintings in the exhibition, with doors open or windows open, an interior and an exterior painting in one. I'm not sure why, but I really liked these paintings - maybe it was the calm and orderliness of the interiors contrasting so starkly with the wildness and unknown potential of the exteriors? Anything can and does happen out there. 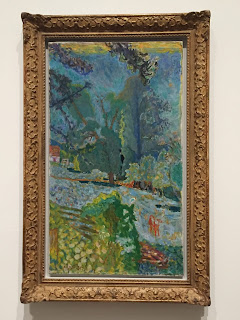 I also loved his exteriors, his landscapes from the various places he lived, such as this 'Normandy Landscape' from 1920.  Just look at those colours. Can you see a brown tree? No, I can't either. When we're children we paint trees with brown trunks and green leaves but when was the last time you saw a brown tree? Tree trunks are more grey/blue/green than anything and it takes a certain strength to paint what your eyes actually see rather than what your mind thinks it knows.

Another impressive landscape is 'Landscape at Le Cannet' with it's gorgeous colours, panoramic view view and the outline of a young shepherd in the foreground. What's going on in this painting and why is the lad simply in outline? I would've been tempted to portray him in blue trousers and an orange top or something, make him the subject of the painting rather than an almost after-thought. 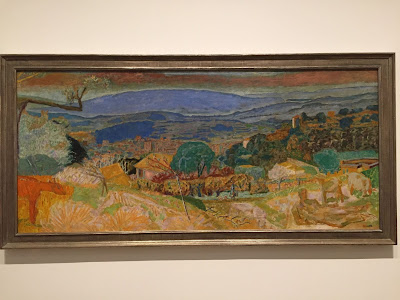 A similar approach seems to have been taken with an earlier painting, 'Landscape: Young Girl With A Goat' (1925) in which the girl (and the goat) is undefined but placed in one of the corners of the painting. The landscape clearly dominates the painting, as it should. 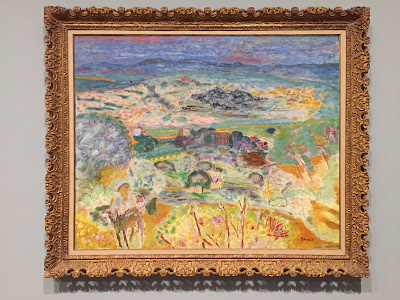 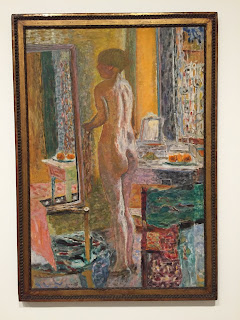 As well as his gorgeous landscapes and gardens, Bonnard painted people as well, and many paintings are of his wife. I wasn't keen on the paintings of his wife in the bath (apparently she had a medical disorder that demanded many baths) but I was quite take with the colours in this 'Nude in the Mirror' from 1931. Again, it's the colour that word for me, the almost stippled effect of the paint, of an elongated figure looking at herself in the mirror. His figure paintings aren't his best and he shied away from painting faces (much like me!) but this painting worked for me. The clutter of the room, the small space she's in surrounded by so many colourful objects all pull together to make this a very good painting.

My favourites at this exhibition were the landscapes and gardens, some making me want to jump into the painting to revel in the colours and the patches of flowers and blossom, the greens and blues, the mysterious reds and oranges and what's that bit over there...? If anything, his colours became bolder as he aged. 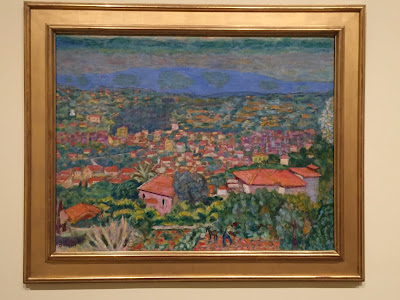 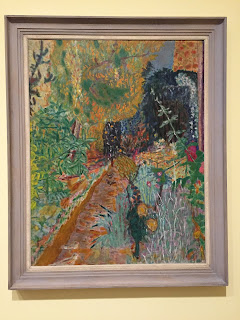 I want to walk in his garden, to smell the flowers and get lost in the foliage, wonder what plant that is and whether it retains it's colours over the winter, who knows? He painted the image of  plant and flower rather than the actual - a splurge of red or blue there, with some green beside it and that's it. But it's that splurge I want to see and touch and smell.

Something that did surprise me about his paintings was the size of some of them, some of them are very big for the time, maybe 10' by 10'? Too big for the average house. He also did a few paintings that he began in 1939 and didn't complete until 1945, the duration of the Second World War. Why was that? That's not explained in the notes to the exhibition but might be covered in the catalogue. 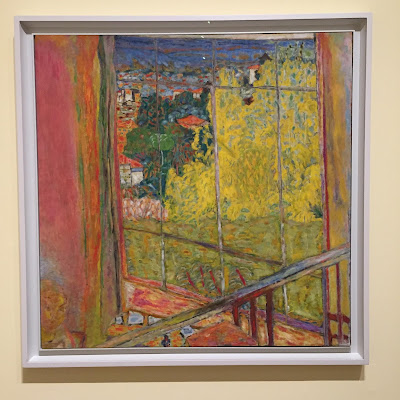 One of my favourite quotes of his up on the walls of the exhibition was: "I am just beginning to understand what it is to paint. A painter should have two lives, one in which to learn, and one in which to practice his art." He is so right.

One of the final paintings in the exhibition is a self-portrait from 1945, just a couple of years before Bonnard died in 1947. Truth and honesty. It's not the prettiest of pictures but it's how he saw himself in his later years. I'm pleased to have seen this exhibition and shared in with his joy of colour - you could do a lot worse than spend an hour in his company. 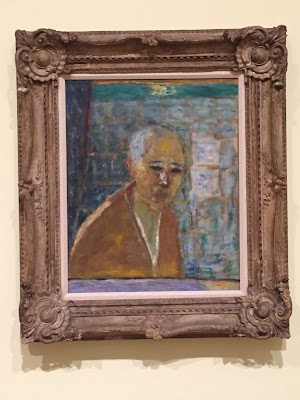