'Romeo and Juliet' at the Royal Opera House 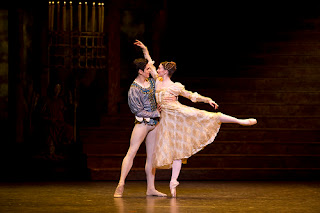 Kenneth MacMillan's 'Romeo and Juliet' is a staple in the programme of the Royal Ballet and it's rather special to me. I saw Steven McRae and Iana Selenko dance the title roles three years ago and that production made me finally 'get' ballet and fall in love with it. O yes, it's that personal to me. I saw the John Cranko version of 'Romeo and Juliet', choreographed a few years before MacMillan's, when I was in Boston last year danced by the Boston Ballet at the Boston Opera House and thoroughly enjoyed it, but I prefer the MacMillan version. 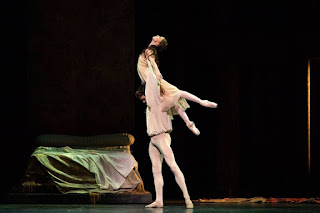 The ballet is back in the programme for this years' season at the Royal Opera House so, naturally, I bought tickets. Steven McRae was due to dance the title role again but sadly injured his knee so our lovers were Akane Takada as Juliet and Ryoichi Hirano as Romeo. I've seen Akane dance in 'Manon', 'Mayerling' and as the swan in last summer's glorious version of 'Swan Lake' and seen Ryiochi dance in 'Nutcracker' and in 'Frankenstein'. They both have excellent track records. There aren't any production photos of them dancing the current roles, unfortunately. 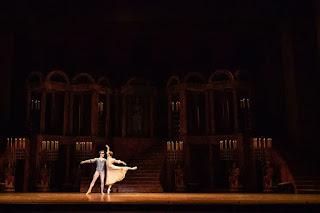 We all know the story. Romeo Montague is a lad about town, stirring up trouble with the rival house of Capulet and hanging out with the Happy Strumpets in the marketplace, and then, after blagging their way into a Capulet masked ball to show off Juliet they see each other and fall in love. That starts the tragedy - how can the young lovers from rival houses possibly marry? They marry in secret and share one night of love before Romeo must run and hide since he killed Juliet's cousin, Tybalt, in revenge for the cousin killing Romeo's best friend, Mercutio. Juliet's parents press her to marry the hapless Paris so she feigns committing suicide. And Romeo, ah if only he'd waited another few minutes. 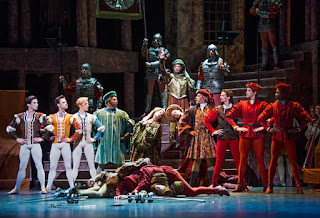 It's a tale of love and joy and tragedy and along the way we meet other characters in Verona. We meet Mercutio, Romeo's best mate and great sword-fencer. We see the Montague (white tights) and Capulet (red tights) gangs sword-fencing in the marketplace and end up with a pile of dead bodies so that the Prince of Verona has to intervene to stop them. This is proper fencing too, fully choreographed of course, but it's very exciting to see all the lads slashing at each other and jumping and bouncing all over the place! Sadly Mercutio and Tybalt also fence later in the ballet and Mercutio is slain, stabbed in the back by Tybalt so Romeo takes swift revenge. 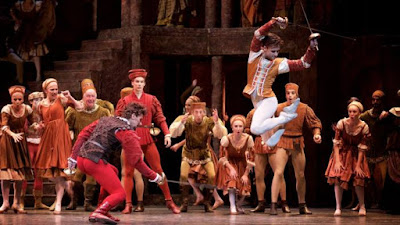 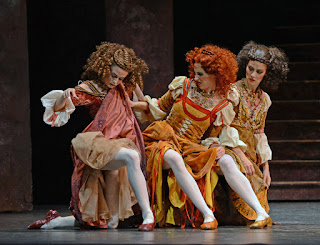 We also meet the Happy Strumpets - the cast list rather casually calls them 'Three Harlots' but I prefer my name for the three lasses. Lead strumpet was a surprise to me - Itziar Mendezibal! I've seen Itziar dance several times, always with so much grace and poise and she was fabulous as Paulina in 'The Winters' Tale' a couple of years ago so it was lovely to see her in a more knock-about role teasing Romeo and the others with her undoubted charms. Romeo is no longer interested after he's met Juliet but I'm pleased he knew the Strumpets. 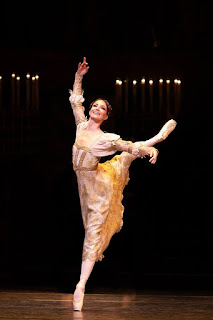 There is a gorgeous range of dancing in this ballet, from the energetic sword fencing scenes to the joyous pas de deux of the love scenes and our leads did themselves proud. Akane was great as Juliet, so elegant and graceful, moving from being the child at the start of the ballet to the poised young women of later scenes. Ryoichi also did great dancing, spurring on his comrades in trouble-making and worshipping Juliet. But, for me, Steven and Iana remain the definitive lovers - Akane didn't quite capture the child at the start and Ryoichi didn't have the same level of characterisation as Steven (but, to be fair, he didn't have the same time to practice the role). I also really liked James Hay as a very bouncy Mercutio and Bennet Gartside as Tybalt. It's a masterful ballet and a great production and odd to realise that this was MacMillan's first full length ballet - he was truly inspired when he choreographed it!

If you want to try out seeing a full ballet you could do a lot worse than choose this one. It's playing until June and will be broadcast live to cinemas on 11 June - try it? You never know, you might actually like it! 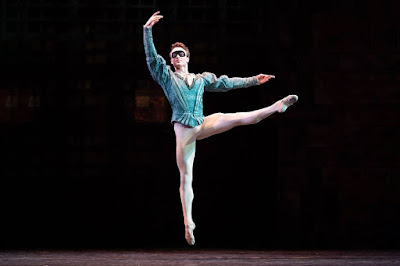