'Marlene Dumas: The Image as Burden' at Tate Modern I went to see the new exhibition of Marlene Dumas paintings at the Tate Modern this week - The Image as Burden. I've never really seen much of Marlene Dumas so this was an opportunity to dive in and learn something new. She doesn't paint from life, she paints from other images and a few of the descriptions beside the paintings talk about trying to find different edits of the photos she used as source materials.

I wandered through the exhibition wondering why, wondering what she was trying to say and why she was trying to say it. My fellow viewers were largely female of a certain age and the subject of many of the paintings was female. In the majority of cases I must own up and say that I didn't really know what I was looking at and then I stumbled across something like 'Great Britain'.

'Great Britain' is made up of two contrasting portraits, one of Streatham's favourite daughter Naomi Campbell and the other of Princess Diana.  One is from a fashion shoot and the other from a royal sitting. How different but both are paintings of young women around the same age and in the same country. Naomi is largely naked while Diana is swathed in silks and yet they moved in largely the same circles, chatted to the same people and attended the same events. Being a supermodel elevates you and being a princess with a penchant for popular culture means you must compromise. What does this composition tell us about class and money and the 1980s? 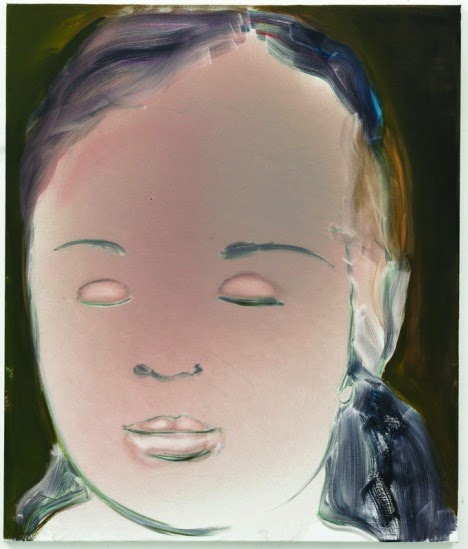 Another work that made me stop and think was 'Helena's Dream', quite a simple picture in many respects but I wanted to know what she was thinking about, what was the dream? Her eyes are closed, hair pulled back from her face and lips slightly pursed - what's going on in her head? What is the dream?

I suppose that's the response to many of Marlene's paintings - what's going on? And it's up to us to decide for ourselves.

One of the rooms was dedicated to her 'For Whom The Bell Tolls' exhibition in 2010 in which she has film stars crying and she says:

"In 2007 my mother died at noon. 'For Whom The Bell Tolls' was about loss and departure, but also about transformation and freedom. A spirit set free. My grief and her relief. So I made the (film)stars and the gods weep for her."

I like the concept and conceit of 'I made the stars and gods cry', of that immense power to be able to make that happen, of the thinking behind the concept. 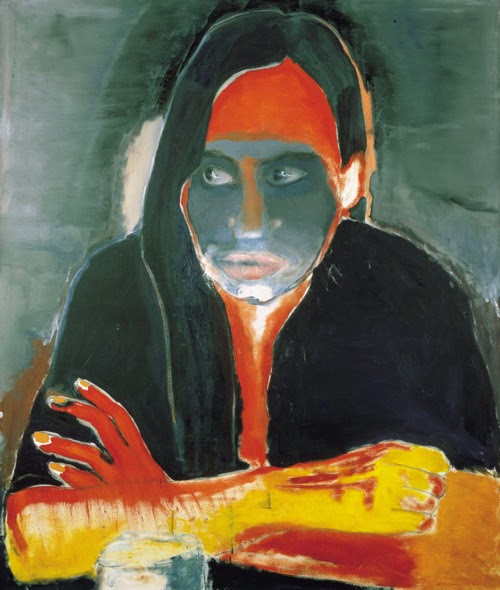 I liked 'Genetic Longing' that isn't explained in any way but it sits on the wall with all these other grey on grey and white paintings. flaunting its colour. It reminds me of one of Buffy Sainte-Marie's digital paintings. I imagine that this is an older woman whose biological clock is running down gazing over at a baby in a pram. The jealousy is there, the need and want. I have no idea what happens next. 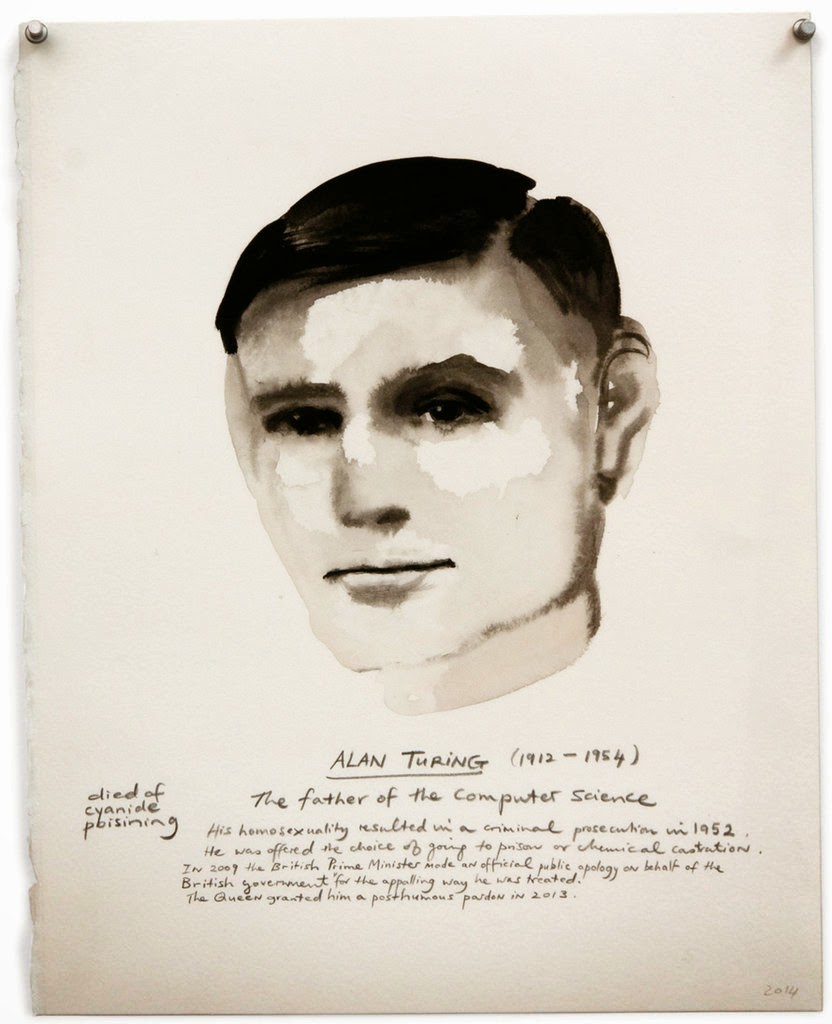 Dumas' most recent work is also on display, a series of small portraits of influential gay men from the last couple of centuries created in response to the political situation on Russia and these were exhibited there last year. They're displayed side by side and include notables like Oscar Wilde and Alan Turing, all with a handwritten short paragraph about them underneath.

It's not really a happy or joyful exhibition, it's a bit ponderous and serious and there's certainly space for that. It's quite thought-provoking and I may well go back to see it again and see whether a second viewing makes me see the paintings in a different way. I suspect I will, having thought about the paintings and themes. I wonder what I'll see next time?
Scribbled by Owen at 2/13/2015 09:23:00 am