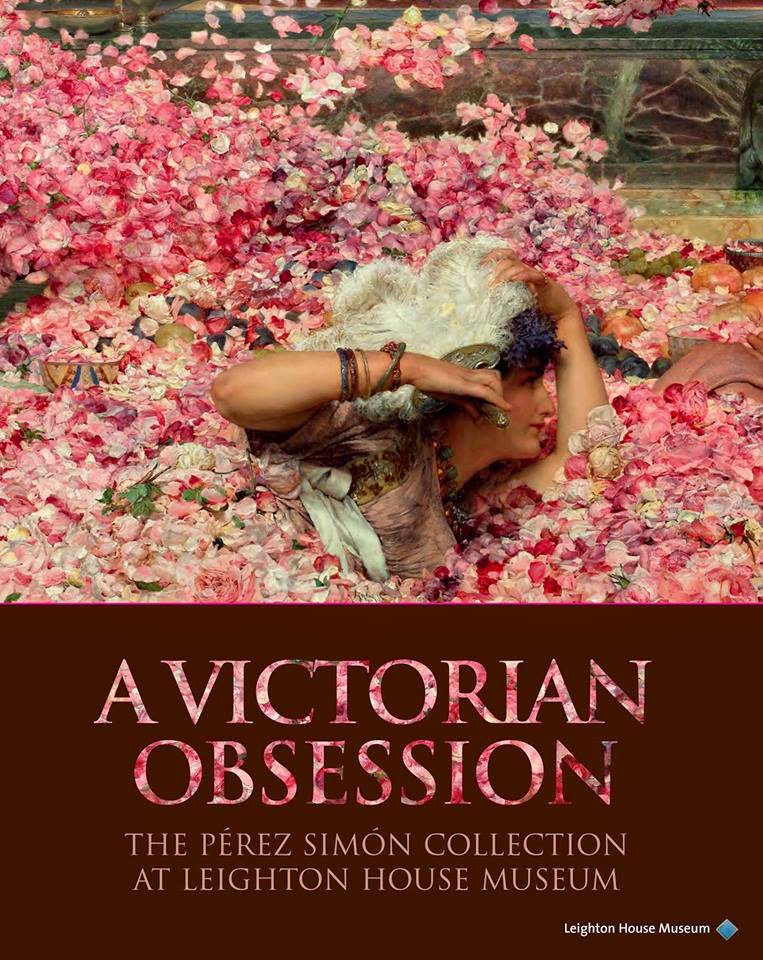 It's a new year so that means a visit to a museum I've never heard of before to see an exhibition I never expected to see. The museum was the Leighton House Museum, the former studio-house of Lord Frederick Leighton just off Kensington High Street. The house seems to be one of those hidden gems tucked away on the website of the Royal Borough of Kensington and Chelsea council and not publicised in any way. Given the number of visitors there the other day then that's no bad thing since people seem to be finding it anyway!

I've never heard of Lord Leighton but, then again, there were so many Victorian painters that's it's unlikely that most people will have heard of them. This visit is really in two parts - to the house that is, I think, normally hung with Leighton's works but for this exhibition, is filled with works from the Perez Simon collection of Victorian paintings. That makes it doubly worth visiting. 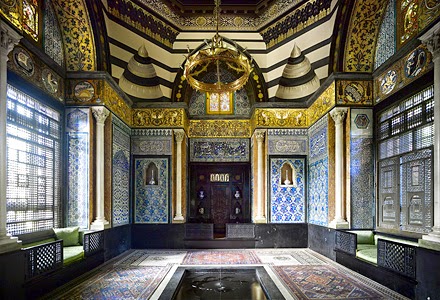 The house is rather unprepossessing from the outside, a typical Victorian redbrick building. You enter through the ground floor and walk into a rather chilly-looking public hallway with a lot of tiles. To the left is the Arabian Room, covered in tiles and a small fountain in the centre, windows on either side covered by grills to maintain privacy and nothing even remotely like a fireplace. This room looks fabulously exotic but must have been freezing in winter! There are two built-in couches beneath the windows on either side that just made me think that anyone lounging there would be even colder. Impressive but hardly practical! 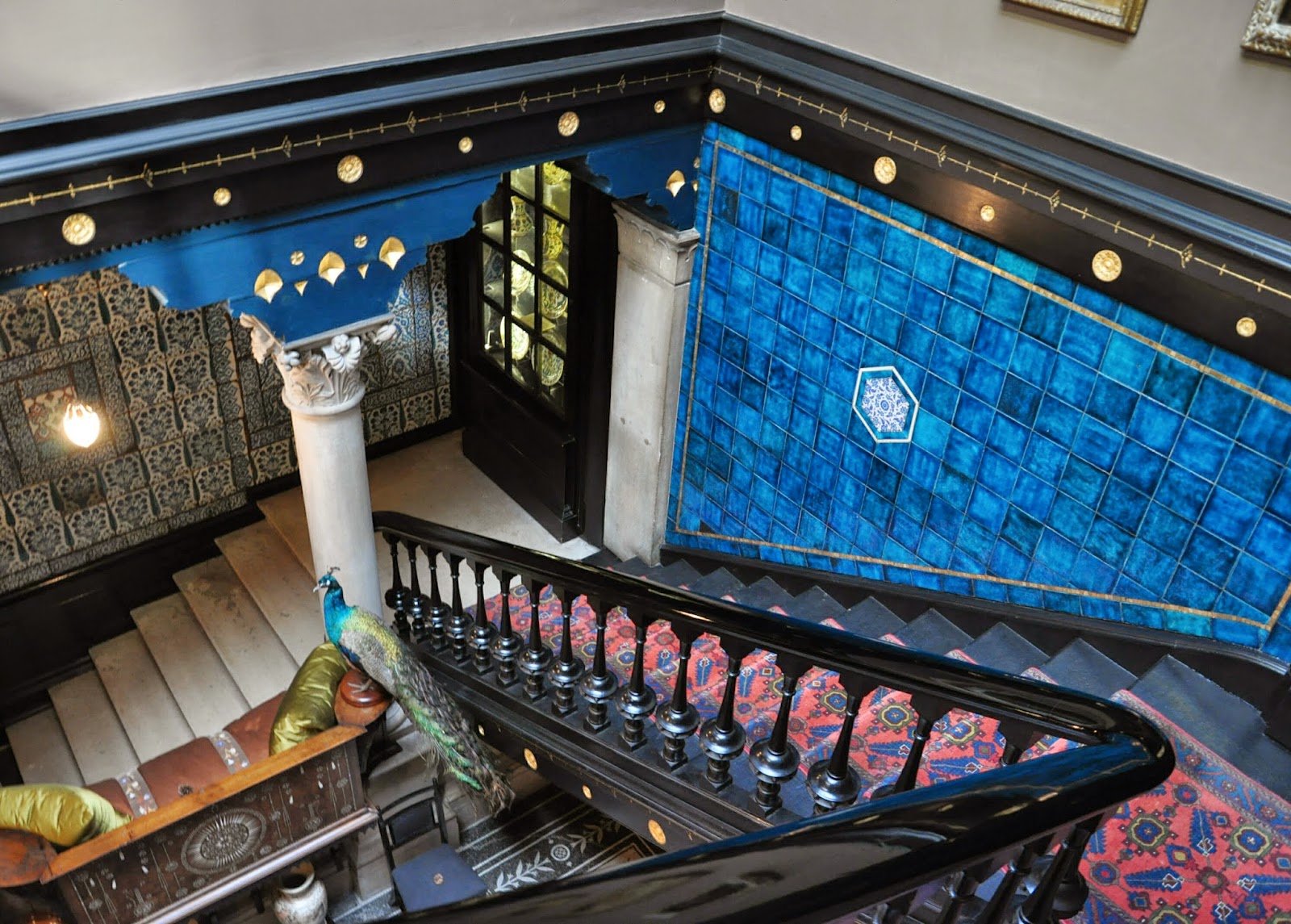 Behind this is a small drawing room and a dining room all laid out for dinner, the small dark rooms beloved of the more domestic Victorians. Then, on the other side of the hallway is the exotic staircase to the first floor and the artists's private apartments and studio. The lower part of the staircase is covered in large turquoise green tiles (that have come out blue in this photo) with paintings higher up. All terribly exotic, with a grilled balcony overlooking the hallway below. Leighton clearly liked his tiles and exotic looking rooms but I kept looking for the practicality of fireplaces to no avail. 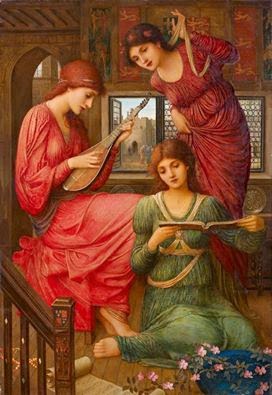 I've seen lots of willowy young women and men over the years in Victorian paintings and the first one of this collection that made me look twice was 'In the Golden Days' by John Melhuish Strudwick. At first glance it looks like a bog-standard Pre-Rapaelite but the composition made me look twice - the shapes and the colours make it worth looking at. The line of the flat book leading to the lute at a 45 degree angle pointing up to the hand waiting to catch the notes. That hand belongs to Guinevere, dancing with her maidens before Lancelot appeared. I think if I was the queen of Camelot I'd want somewhere larger to dance in. I'm not sure what the blue cloth at bottom-right is meant to show but it adds a nice contrast to the colours and has the added drama of having flowers strewn over it.

There's a lot in this painting worth decoding and I'm sure there's meaning in the colours and shapes - I suppose the obvious question for the Victorian painters is why do we need to decode it at all? Are you just showing off Mr Strudwick?

There were quite a few painters I hadn't heard of before - or rather, hadn't noticed before even though I've probably seen their works in other exhibitions, museums and galleries. The name that leaps out at me is Lawrence Alma-Tadema, later knighted as a great Vicorian despite being born in Holland and trained in Belgium. But it was Britain that appreciated him so he moved here in 1870. 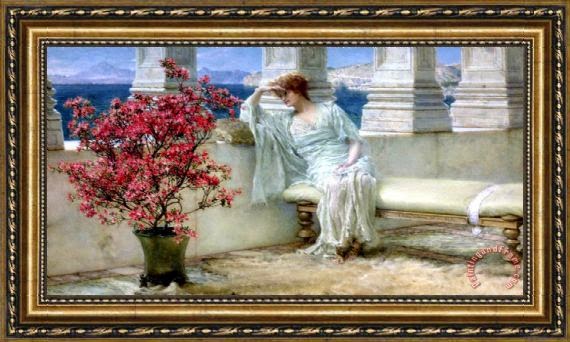 The painting that first made me take a second look at his works was 'Her Eyes are with her Thoughts and they are Far Away' - a silly title for such a powerful painting. It's one of those where the Mediterranean sun is the real feature of the painting, with the young lady of antiquity gazing out over the Bay of Naples with the searing white light playing on her clothes and surroundings. It's quite small but perfect for what it is. And you just know that if you were there at the time you'd reach for your sunglasses and hat… 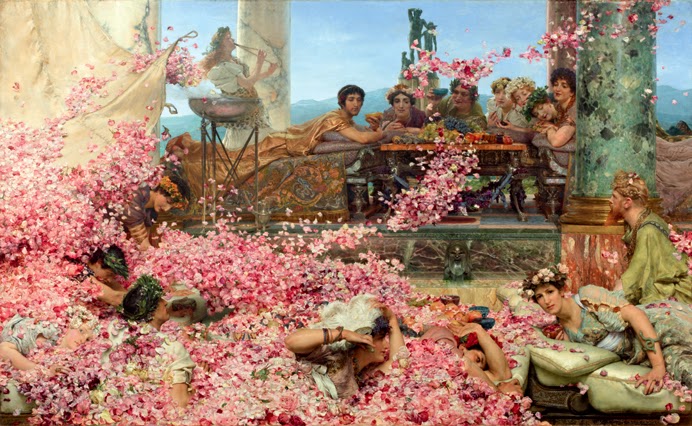 Of course, the highlight of the show is another of Alma-Tadema's paintings, 'The Roses of Heliogabalus', which is housed in a special temperature-controlled and scented room. Yes, 'scented'. A real 'smell-o-vision' experience for a really odd painting that sums up Alma -Tadema in a sense.  It's a large painting that depicts the young Roman emperor Heliogabalus (who didn't last very long) watching his dinner guests get smothered by rose petals, the sheer weight crushing and stifling them.

There's also an earlier, small draft version of the painting on display to compare this with and it's noticeable that the woman bottom-right is in different clothes but also that she seems to be appealing to us to save her. The blond man beside her - presumably a northern European slave - is missing from the draft version but I like him being here with the woman on the couch peeping round to see if he's still alive. Were they lovers or was she just being prurient? I like intrigues like that.

One of the oddities of the show were the paintings depicting the oriental scenes with dusky maidens and those with Victorian matrons playing dress-up. It was quite obvious in some of the paintings, with the blushes on the cheeks and the matronly bosom and body fully covered.

If you find yourself on Kensington High Street with an hour or so to kill then you could do worse than head over to Leighton House Museum for a gander at the exhibition. I'm in two minds about going back myself - I suspect I'll absorb more from a second viewing. 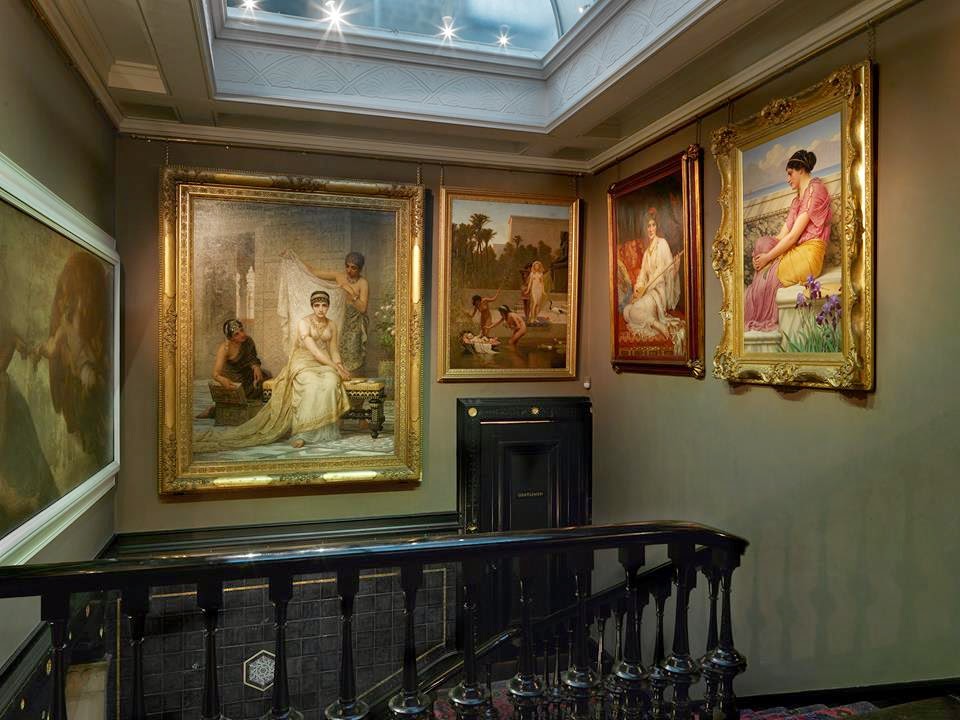