'Dara' at the National Theatre 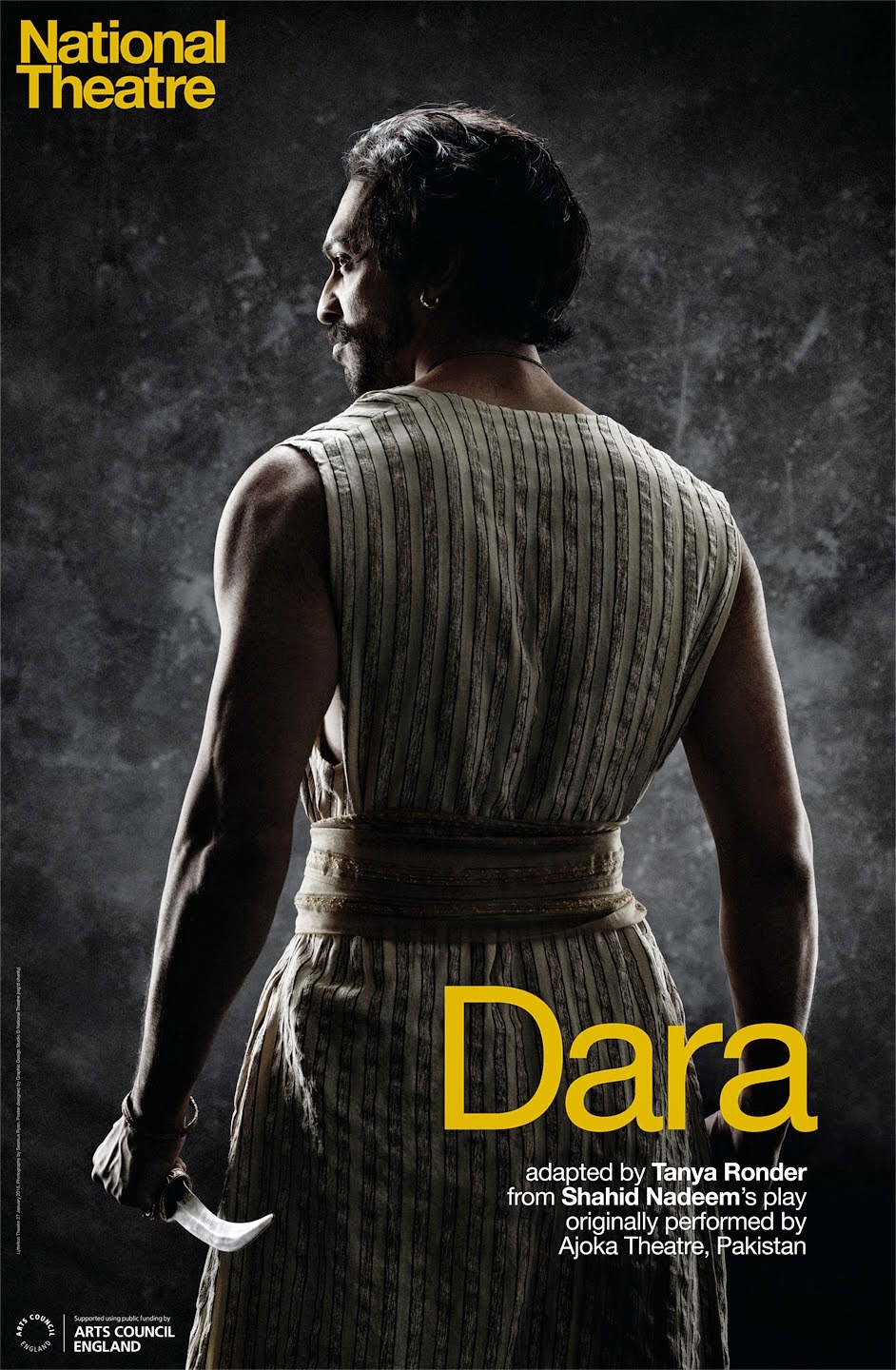 We went to see the new production of 'Dara' at the National Theatre last week, a new play about the struggle for the throne of the Mughal empire in northern India in the mid-1600s. Shah Jahan built the Taj Mahal for his wife Mumtaz Mahal and it's their sons, Dara and Aurangzeb, who contend for the throne while their father is still alive. I'm familiar with the name of Aurangzeb from my travels round northern India - and particularly around Delhi and Agra - in the '90s, but I've never heard of his older brother Dara before. Apparently he's still a respected Sufi poet in India but it shows how the victor writes the history books.

The play is from Pakistan and was first performed in Lahore in 2010. It was written by Shahid Nadeem and adapted for this production by Tanya Ronder. Shahid has campaigned through his writing for human rights and justice in Pakistan and it's quite interesting that this play has come here with the arguments about the nature of Islam, Sufi and Hindu and with Aurangzeb's hardline  Muslim beliefs versus his brother's idealistic Sufism and poetry.

Here we have a very declamatory play with set speeches and set pieces and family conflicts versus the state, inter-family squabbling and revenge and the fate of nations depending on a few people at the top. It was rather Shakespearean in it's reach. One reason to take so long to blog about it is that I'm still not sure what I thought of the play. Do I like it or do I appreciate it? It's certainly worth seeing and is getting great reviews but I'm still in two minds. 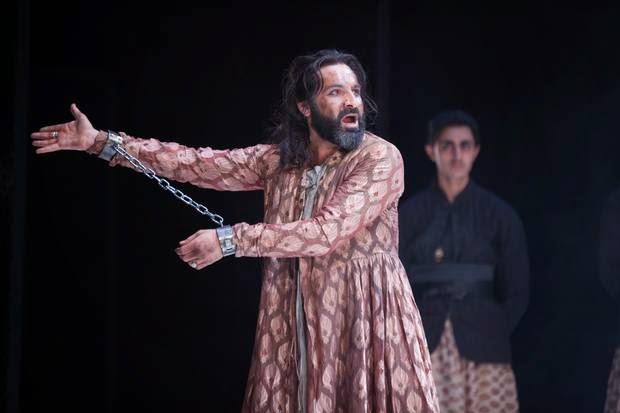 The play opens with Dara and his son seeking sanctuary at the edge of the empire, being chased by Aurangzeb's army but he's betrayed and handed over to his brother's army. We get flashbacks to see where this enmity might have originated, back to when a Sufi mystic singled out Aurangzeb as the threat to his father's throne - would that threat happen anyway or did this cause it? This cumulates in a lengthy court scene at which Dara is accused of apostasy and questioned about wearing a Christian cross round his neck and a ring with a Hindu inscription as well as his Sufi ways and symbols. Will he be found guilty and executed or banished? 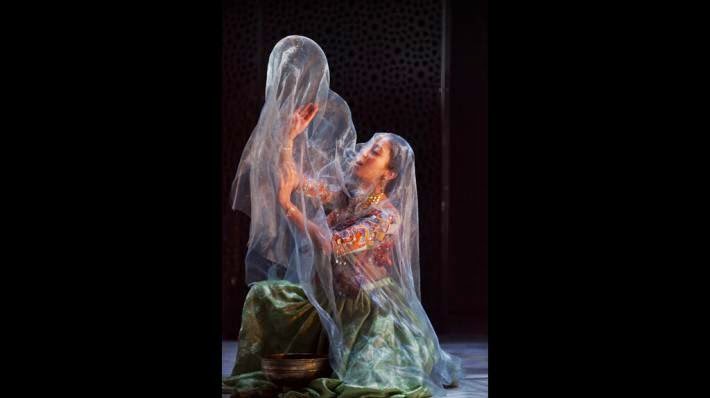 We see more of Aurangzeb's past and his love for a Hindu dancing girl who asks him to drink wine against his principles and he goes to do so for his love of her but she removes the glass so he doesn't have to. It was a test to see whether he would, not see him drink. He was willing to bend his principles for love so what made him so harsh and unyielding in later life? Probably lots of things, and probably ordering his brother's beheading which comes back to haunt him.

I thought it was an excellent production and the set was just right, largely bare but with corners of the stage filled with Mughal arches and lattice screens sliding across the stage as the scenes changed, creating intricate patterns of light. The light was dramatic throughout, almost a character in its own right. Zubin Varla as Dara and Sargon Yelda as Aurangzeb were great as the lead characters, with a large cast around them to bounce off.

But did I enjoy it? 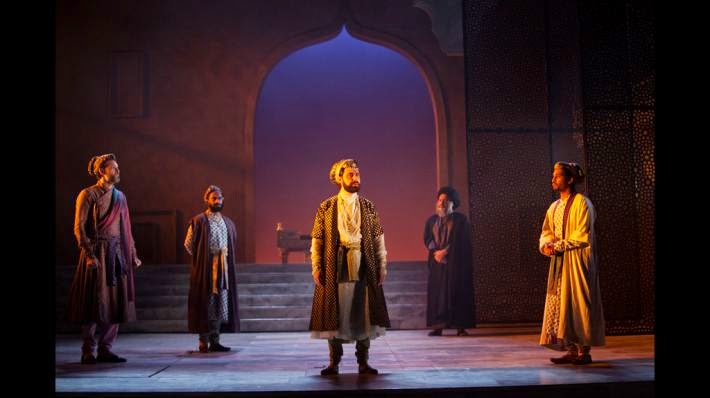 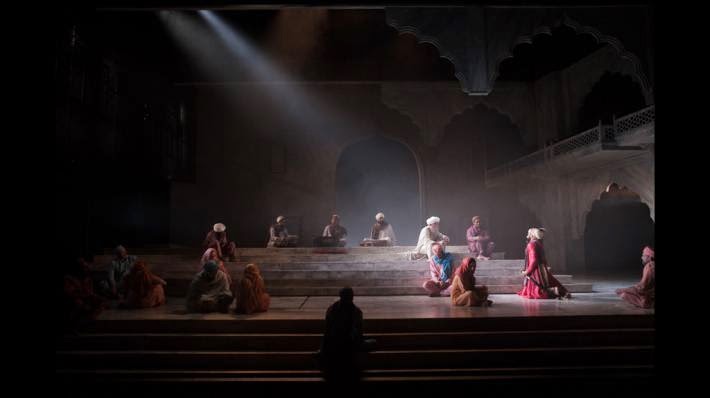