'Grayson Perry: Who Are You?' at the National Portrait Gallery 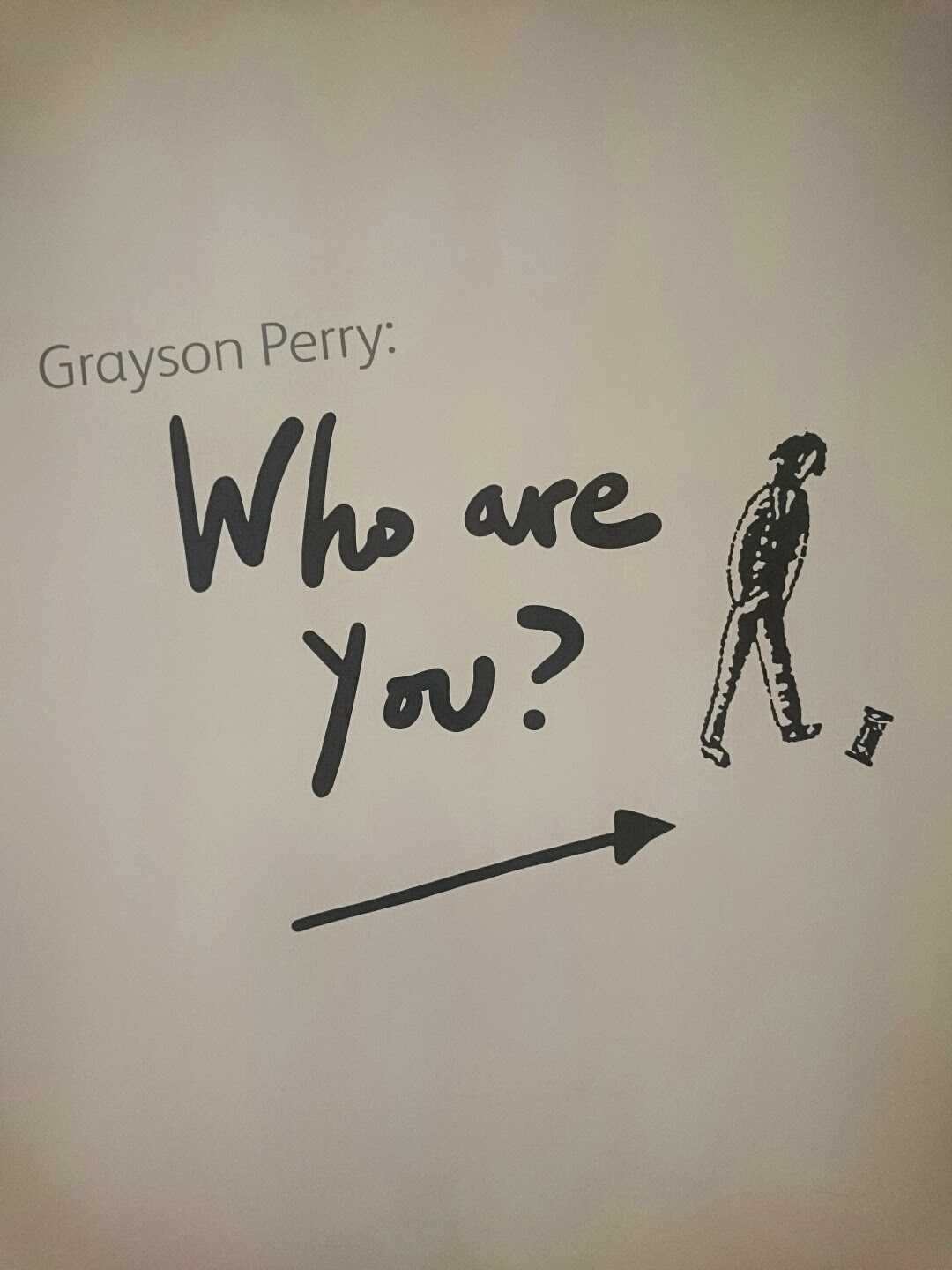 Grayson Perry has an exhibition on at the National Portrait Gallery at the moment, a follow-up to his TV programmes last year about identity and creating portraits of people he met. It's not your usual bung 'em in a room and let people gawp type of exhibition, no, with this one you have to work to find the art.

It's in the first floor of the National Portrait Gallery and at the start of the exhibition you pick up a floor plan with arrows taking you on a journey through the standing collection to find one of Grayson's objects. Will the next one be a vase or a blanket or a statue or a miniature portrait? Find it and find out! It's quite subversive in a way, mixing the old and the new, the usual portraits of the great and the good, mostly dead and named in history books with Grayson's works standing beside them. I wonder how it was decided which work to put in which room? 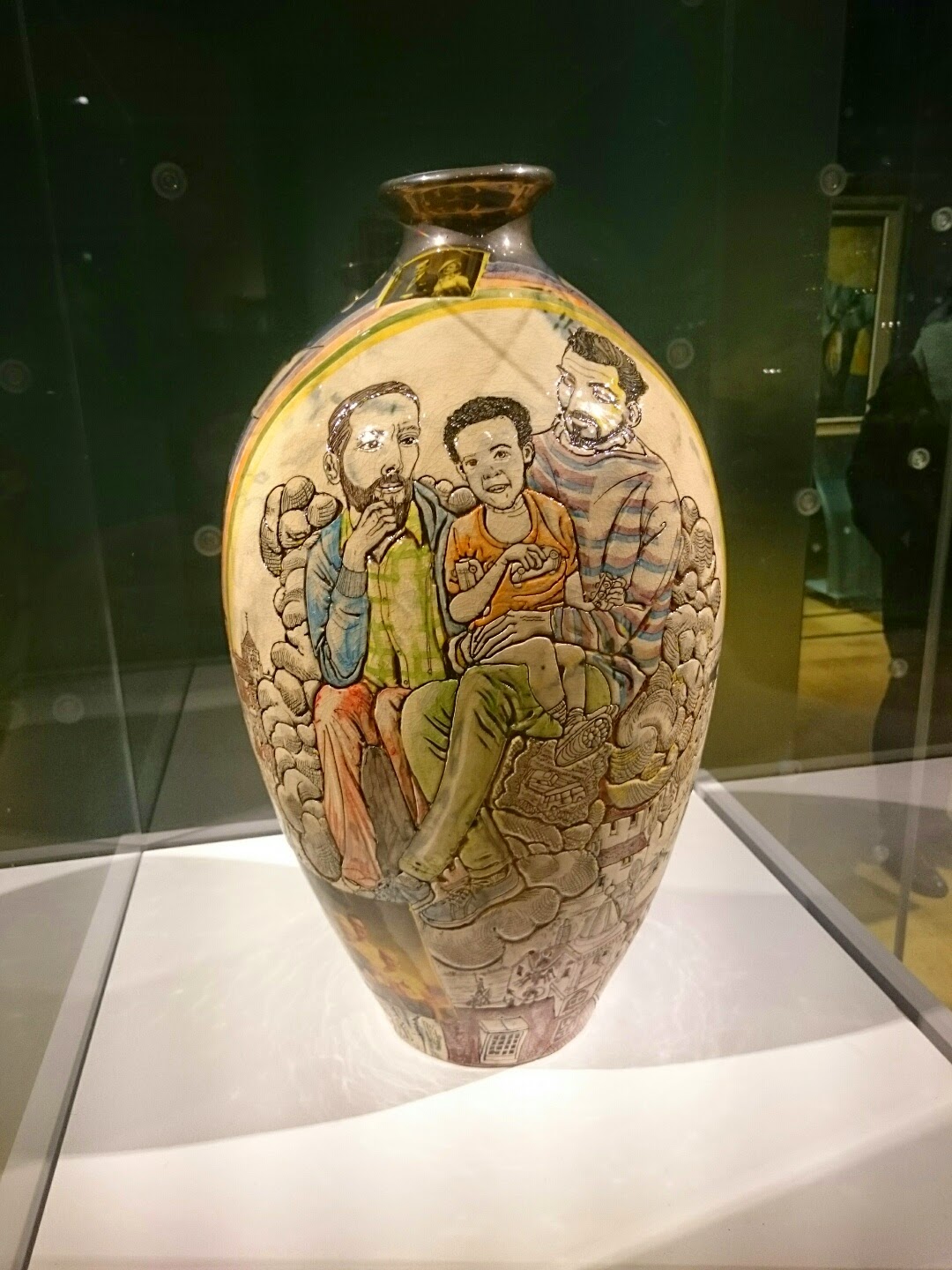 There are shiny vases, all about two feet tall in different shapes and showing different approaches to family as well as politics and emerging issues. We see gay adopters being celebrated on one side of the vase called 'Modern Family' with images of other family groups on the other side. Another vase is called the 'Idealised Heterosexual Couple' that has the mother and father on one side of the vase and a daughter on the other side but the couple have split up and the dad drives his daughter to dance classes even though he lives a few miles away so that he gets to see her regularly.

Another vase called 'Memory Jar' is about Alzheimers and shows an older couple on one side and the memory thief demon on the other side, stealing memories. Another vase is 'The Huhne Vase' about Chris Huhne, former Cabinet Minister who went to prison for perjury and is decorated with his name, his face, a phallus and balls and other images of what Grayson calls 'Default Man', ie white, middle aged, middle class man. 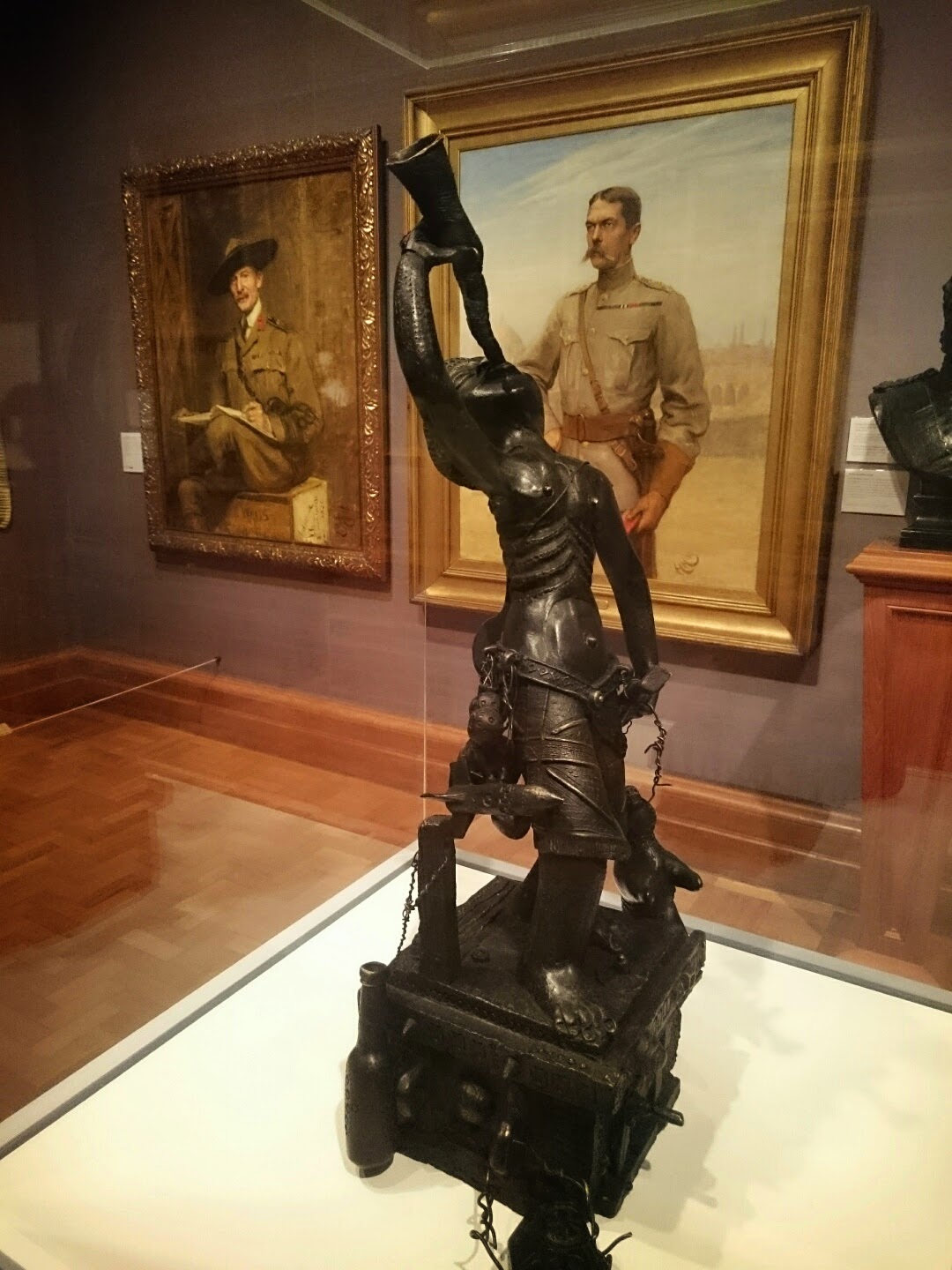 One of the most rebellious pieces in its own way is 'I Am A Man', a small metal statue based on the Benin images from Africa of a female to male transexual. It's very primitive and raw and very male. And it's placed in a gallery of large paintings of male war heroes. This isn't the best angle to take a photo but it shows the kind of portraits in the room so might help understand the power of finding the right position and site for a piece of art.

There was also a lovely miniature portrait of Rylan Clark as the 'Earl of Essex' in a room full of eminent Victorians, with him being compared to and thought of as modern day royalty. Grayson argues that reality TV stars are the equivalent of royalty these days since they're almost treated as such in everyday life so let's take that approach in the arts.

The largest piece greets you as you climb the stairs to the first floor - an enormous patchwork 'Comfort Blanket'! It notes all the things the British love and love to hate, sometimes in images and other times in words. It's marvellous! And here it is with some people admiring it to give you a sense of scale. 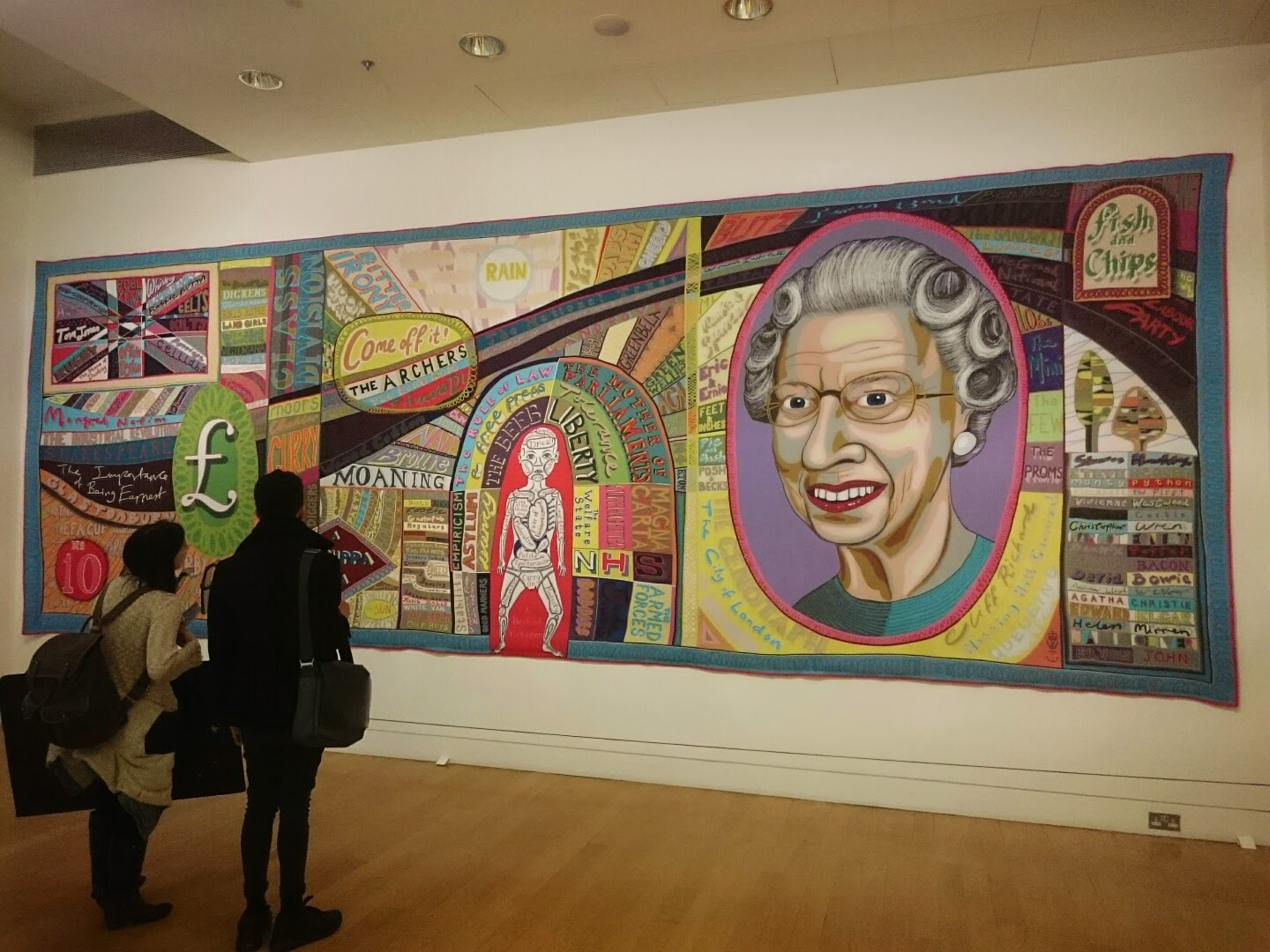 Beside each of the works is a small sign with the name of the piece but also a paragraph or two from Grayson explaining the background to the piece  and this is what he says about 'Comfort Blanket': 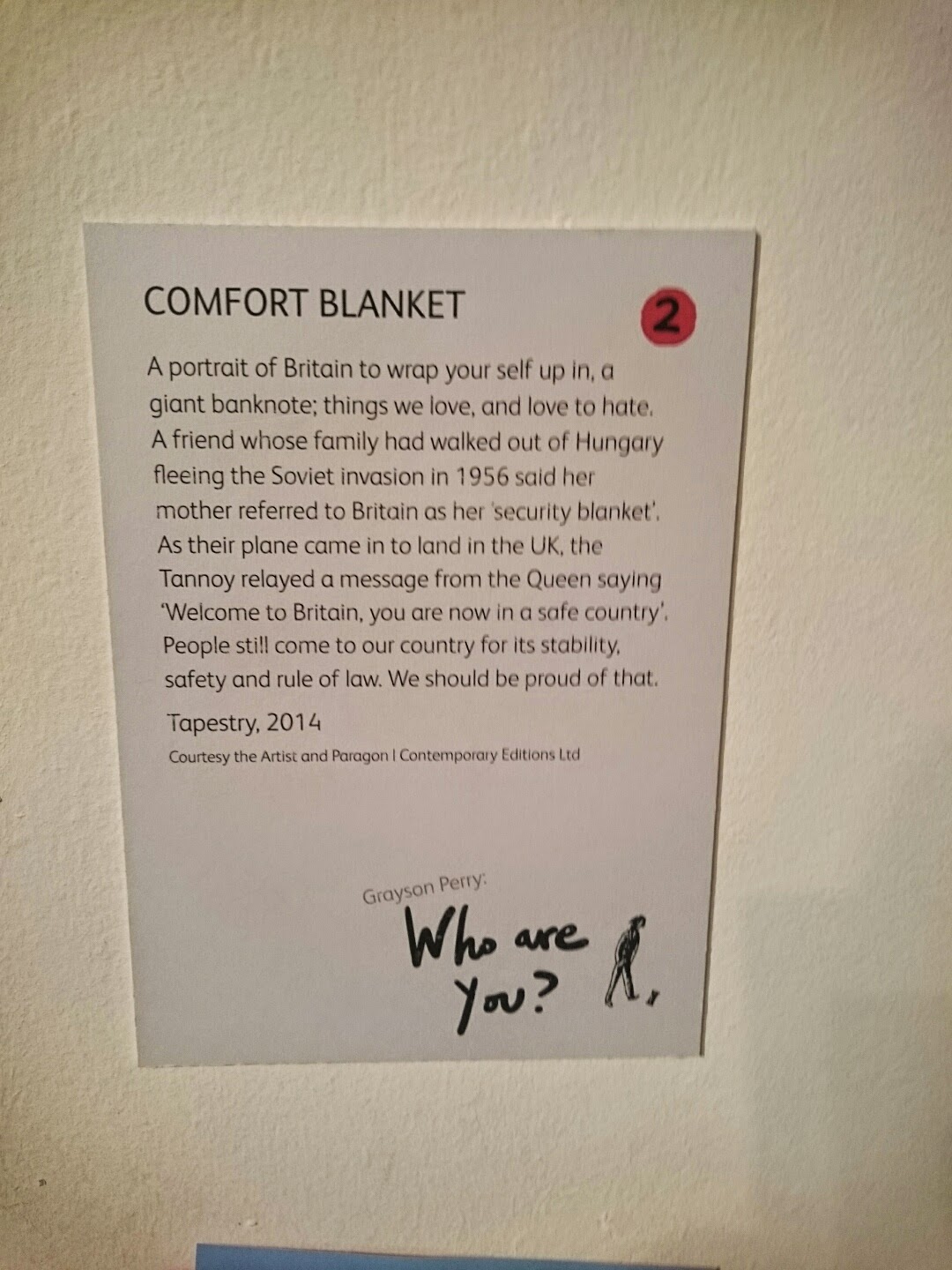 The exhibition is free to enter so take advantage of that and visit Grayson. There's lots more than the few I mention - I loved the ceramic fat ladies and would love to have them in my living room to cheer me up after a long day at work. I'm very admirationous of this exhibition and Grayson's works in general. They're fun and frivolous at one level but have something powerful to say if you can be bothered to think. The portrait of him in a madly colourful frock is also on display beside the final works.