The first time I saw Amanda Palmer was when The Dresden Dolls performed at Patti Smith's Meltdown festival on 23 June 2005. I've mentioned this before but I've now found a video of the evening on YouTube. Some of the Meltdown events were filmed but have never been released - I well remember Patti's performance of her first album, 'Horses', being filmed by Don Letts in the Royal Festival Hall and Patti jumping off the stage and running into the audience just a few feet away from me.

The Dresden Dolls performed as part of the 'Stand Bravely Brothers' evening of songs as a homage to Bertold Brecht, Amanda banging away on her piano and Brian thumping his drums and zinging his cymbals. They played 'The Ballad Of The Soldiers Wife' in the first half and Amanda came on in the second half to sing another song but I can't remember what it was. The bill that night included Marc Almond, Martha Wainwright, The Tiger Lillies, the Finn Brothers, Sparks and, of course, Patti and others. 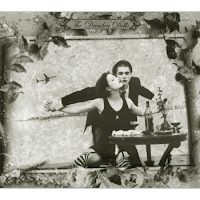 After the show there was a free gig by the Dresden Dolls in the open performance space in front of the bar at the Royal Festival Hall. It was crowded - there must've been a couple of hundred people sitting on the floor waiting for the Dolls to appear. I was curious - I liked Amanda's voice from the two songs I'd heard her sing in the Brecht homage and wanted to hear more. On they came on, settled down and opened with 'Good Day'. That was the first Dolls song I ever heard. They played a short set including 'Girl Anachronism' and 'Coin Operated Boy' and I remember Amanda swigging beer during 'Amsterdam'.

After the gig I headed to the merch stand to buy 'The Dresden Dolls' album on 8ft Records. Amanda was wandering round greeting people and she signed the record for me, adding an extra flourish under her name and giving me an arch look. That was the first time I met her and, even though I didn't get a hug that night, it sticks in my memory.

I've seen Amanda play every time she's performed in London since then and met her afterwards most times. I've even met her coming out of a theatre on the Strand with Neil Gaiman when we just happened to be at the same performance of an Alan Cummings show. I shall meet her again in June when I attend her art show to celebrate her new album. I'm hopeful of an Amanda Hug that evening.Click the link on the right to get your ticket to the show.

Anyway, here's the video of 'Stand Bravely Brothers' I mentioned - scroll in to about 4:45 minutes to see the Dresden Dolls.  Leave it running and you'll also see Patti Smith raise her skirt to do a little dance to 'Mack The Knife'. Enjoy.