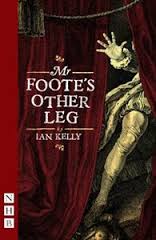 Last week we went to see a new play at Hampstead Theatre, 'Mr Foote's Other Leg'. It's the tale of a group of would-be actors who meet at an acting class in the 18th Century and who go on to define the theatre of the future. We have Mr David Garrick who re-popularised Shakespeare and had his own theatre (guess what it was called?), Mistress Peg Woffington with her dense Oirish accent that softened for her to become a comedienne and tragedist, and Mr Samuel Foote, the satirist who also ended up with his own theatre (the Theatre Royal Haymarket, just along the road from where the current theatre stands).

We see these three friends getting round the censors that governed the theatre in Georgian London and developing their own works. As they become famous and have a bit of cash in their pockets they stray apart on their own theatrical adventures, particularly Mr Garrick and his quest to popularise  Shakespeare. Mr Foote wrote his own plays and satires and even satirised his friend, Mr Garrick's 'Othello' by putting on a comedy version of the play. 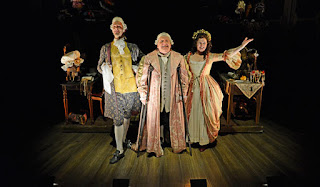 And time passes and the three grow older, meet the royals and are awarded royal status for their theatres, and Mr Foote has a silly riding accident that means he loses his left leg in a harrowing scene where it's sawed off on stage in front of us. Ouch. He gets a false leg but has twinges of pain for the rest of his life. Guess where the title of the play comes from?

Life kicks in and Mistress Woffington is diagnosed with cancer. There's a lovely scene with the three friends together again on her bed, wigs off, as she lies there dying, reminiscing about the old days as old friends do. Mr Foote still lives on the edge and pokes fun at the rich and powerful but when they start fighting back, accusing him of sodomy, then his life takes a downward spiral with bouts of madness and depression and he tries to commit suicide. He's advised to leave England by Mr Garrick and he dies while waiting for a ship to France. 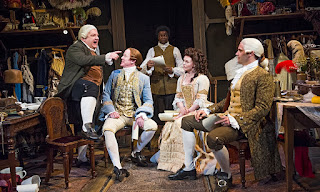 There's an awful lot going on in this play which spans many years and even brings in Benjamin Franklin in places while he lived in London. So much is happening that I've hardly done it justice in this blog - if you go to see it, maybe take a notebook to note it all down.  'If you go to see it…' - well you should because it's well worth seeing and it's transferring to the Theatre Royal, Haymarket (co-incidentally?). It sounds a bit serious but it's laugh-out-loud funny in places - there's something there for everyone (and the author even plays the prince). 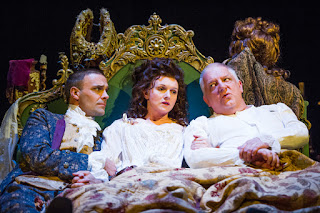 Dervla Kirwan was excellent as Mistress Peg and it took me a while to realise it was her, she was so in the part. Her touching scene in her death-bed was terribly sad, knowing what is going to happen but determined to go out with a laugh. I also liked Jenny Galloway as the stage manager who I've seen in a few things over the year and always delivers the goods. She's a safe pair of hands. Joseph Millson was good as Mr Garrick, pompous and apoplectic by turns but still the good friend throughout. 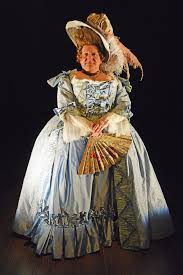 The play belongs to Simon Russell Beale and it's definitely his vehicle. The ambitious actor, the wily playwrite, the mad schemer are all him in different guises. I've seen him in lots of plays over the years and he never fails to impress and this is another one of those. You leave the theatre talking about him and the changes he goes through - he takes you a journey... but he's in charge. The light and shade he brings to his characters, the physicality and enegry he gives them pulls us along with him. He's a great actor.

The staging was great too, lots of detail where detail was needed and sparse where that helps.The costumes were just what you'd expect for the period. It'll be interesting to see how it transfers to the much bigger stage of the Theatre Royal. 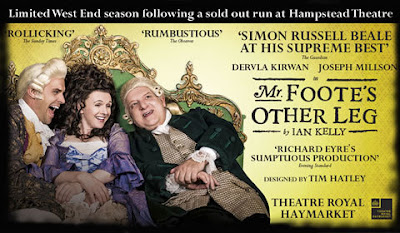