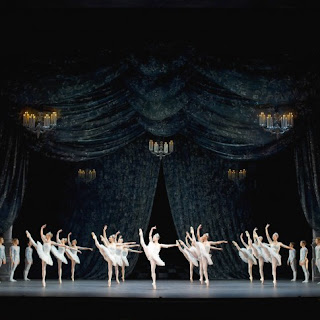 Last night we wended our way to Sadler's Wells in Islington to see the Birmingham Royal Ballet's 'Triple Bill' of three one act ballets and what a joy they were. I'm not the biggest fan of bally but every so often it's a joy to behold so choose your productions wisely. Luckily I chose wisely last night!

The first production was 'Theme and Variations' with music by Tchaikovsky and choreography by George Balanchine. It looked gorgeous with huge billowing blue curtains framing the stage and chandeliers hanging from the ceiling. It was what I consider a bally to be - lasses in tutus and men in tights - you know what you're getting with tutus and tights. It was the shortest of the three ballys but it was wonderful to see the classic moves and simplicity of the production. I admit to wincing every time the lasses went up on tippy-toes - that must hurt and ruin their feet. But it was lovely to see the grace and beauty they created on stage. 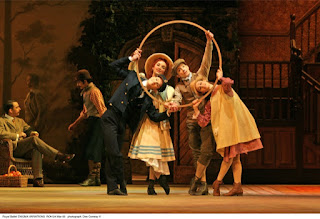 After an interval we had the second bally, 'Enigma Variations' set to music by Elgar and choreography by Frederick Ashton. Much as I liked the first bally, I think I liked this one more. The curtain rose to reveal an autumnal stage in golds and browns, the right side of the stage set like an Edwardian drawing room in a country house and the left side as the garden, complete with falling leaves every so often. Perfect for an autumnal day in mid-October. The men in tweeds and the women in long frocks, with country yokels and old fashions bicycles, it summoned up a brilliant picture of olden days. 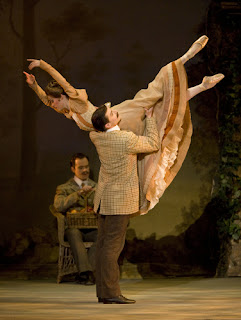 The bally moves through the day, from the exuberence of the morning through the lazy afternoon and into the evening, with great atmospheric changes in the lighting. The real power behind this production was Elgar's music. Two thirds of the way through the bally the music picked up the themes that are always played on Remembrance Sunday (at least on the BBC in the UK) that instantly bring to mind the First World War and poppies for remembrance.

At this point I made up my own story to the bally, with the mother and father figures dancing while the younger son intercepts a telegram and shows it to them and they react with joy - confirmation that their elder son is alive. The production ends with a photograph of the extended family. It was all very touching, especially since Remembrance Sunday is only a few short weeks away. 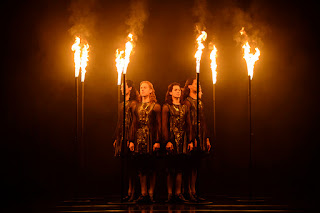 After another half-time we moved on to the final bally, 'The King Dances' with music by Stephen Montague and choreography by David Bintley with some incredibly dramatic lighting by Peter Mumford. This tells the tale of how the Sun King, Louis XIV invented bally, inspired by a horned devil and some homoerotic dancing. It was very spectacular and opened with dancers bringing on burning flames that surrounded them to raise the tension. It worked. This was the longest bally at 38 minutes and it was spectactular.

We follow the king through an evening and night of terrors until the king emerges again, the Sun King in all his golden glory. It was all terribly wow-inducing and then we see the king in all his glam-rock glittery finery at the end with his courtiers. Clap clap clap! 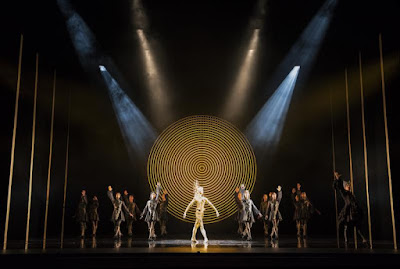 These were three very different and very spectacular ballys and all were great in their own ways. It was a nice reminder that bally isn't solely about dancing - like any public production, it was also about costume, stage design, lighting and music. Put it all together and you get something worth seeing. I'm very pleased I saw these productions and well done to everyone involved.
Scribbled by Owen at 10/17/2015 05:27:00 pm