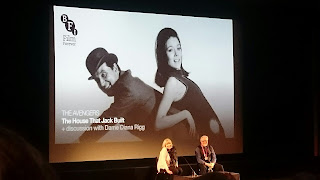 Diana Rigg and Emma Peel are the same person, right? Or are they? Have you ever seen them in the same place at the same time?

On Sunday afternoon I was escorted to the National Film Theatre to see an episode of 'The Avengers' from 1966 that explains the history of Emma Peel followed by a Q&A with Diana Rigg to celebrate Emma Peel at 50. The episode was from her first series of 'The Avengers' and was in black and white, very 60s-looking and very seasonal with no leaves on the trees in the countryside. It was 'The House That Jack Built' in which the bad guy (who was dead) tried to drive her mad and to suicide but Mrs Peel survived to karate chop another day, obvs. When will the baddies ever learn? You don't mess with Mrs Peel. 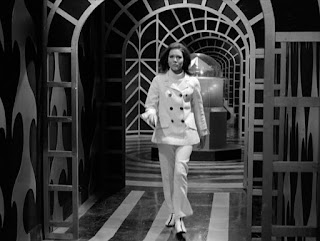 It was great to hear that theme tune again and see The Avengers - Steed and Emma were always my favourites. It was all very gripping and 'ooo what will happen next'. Emma will win, obv, but how? Patrick Macnee was on holiday when that episode was shot so it's really her show. It turns out that Emma is the daughter of a wealthy shipping magnate and she ran the company for a while after her father's death before she married an ace test pilot (Peter Peel) and that's partly how she's so clever. And also how she started to collect enemies as we see in this episode. It was nice to re-live the tension, the suspense, the 60s special effects and Mrs Peel chopping a man so hard he flies across the room (that lady doesn't know her own strength). 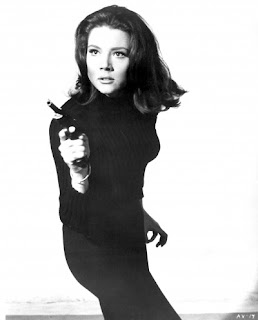 At the end of the episode there was a resounding ovation from the sold-out audience, most of whom seemed to be 'a certain age' (like me). And then Diana, who'd been sitting in the audience to watch the episode walked to the stage with the aid of her daughter and went up to be interviewed by Dick Fiddy in what turned out to be an interesting and fun interview followed by questions from the audience. Half-way through the interview it occurred to em that I could've been sitting next to her! I wasn't, but I could've been.

Diana came across as being lovely, assertive and not afraid to speak her mind. When talking about working with Vincent Price she said he was 'mean as mouse-shit' in a loving way to enormous laughter. She said she hated the black leather catsuit (which I don't believe for a minute and am sure she was wearing it under her outer-wear just in case of attack) and much preferred the trendy fashions of the later episodes and second series.

Questions ranged across her career with the notable exception of her appearances in 'Game of Thrones'. There were also a couple of film clips, the first from her appearance in a TV play with Harry H Corbett as a manic tropical horticulturist, and the second, which closed the event, was the end of her final appearance in 'The Avengers' after her previously lost husband turns up again in the Amazonian jungle. Emma says farewell to Steed and, walking down the stairs, passes Tara King going up and she gives her advice on stirring Steed's tea. Farewell Emma!

It was lovely to be re-acquainted with Emma Peel and Steed, hear that music and see Mrs Peel outwit yet another bad guy. And lovely to see Dame Diana and listen to her stories. 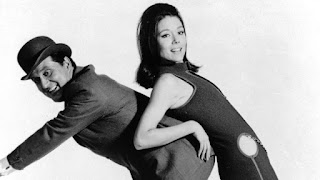