'Loved' at The Department Store, Brixton 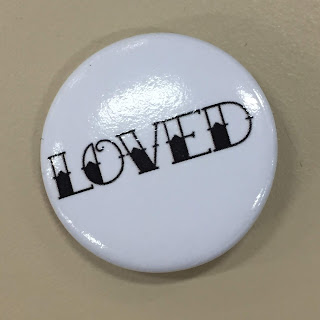 'Loved' is an exhibition by illustrator Charlie Hunter and sound designer Mike Wyeld that's touched down at The Department Store exhibition space in Brixton for its London stop.

According to the blurb:

LOVED documents and explores the global phenomenon of the Bear Community, using it as a lens on the LGBTQ+ world – finding global and local incarnations and edges. While myths of beauty and ideas around body shape, fitness, even obesity are hotly debated in mainstream culture, some people – including ‘Bears’ – have found acceptance in new movements and set in motion new ideas – they are LOVED. 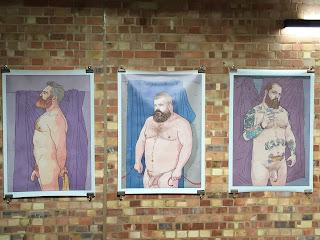 It's a collection of three quarter length portraits of men mainly with their kit off (although some are more modest than others).  They're basically large line drawings with colour washes and I think it's that that creates some of the interest. Apparently they're drawn on an iPad rather than paper or canvas which must be a handy way to carry them round and print off when needed. The exhibition also included two large screens with changing quotes about their lives and experiences from the models.

I know that the exhibition is billed as an exploration of 'bear culture' but it made me think of something else, and that's how shy we are of naked men. Even the publicity for this exhibition covers up the mens' bits. Why is it still considered shocking to see a naked man? It reminded me of the Burne-Jones exhibition a couple of miles up the road at Tate Britain and how he got into trouble for daring to show a naked man, genitals and all. When I do life drawing, more often than not the model is female and it's quite rare to get a male model. None of these works are 'rude' at all and we all know what a naked man looks like, so what's the problem? These works aren't of the standard idealised body, these are real men you could see on a bus or train anywhere.

Anyway, it's well worth a visit if you're in the area and The Department Store is just a few minutes walk from Brixton tube station. The show is on until 9 December and admission is free. 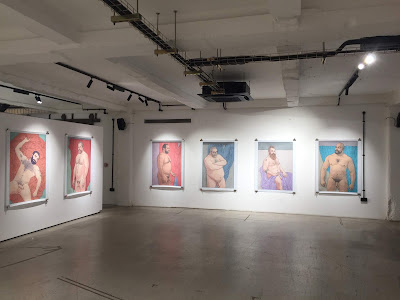