'The Inheritance' at the Noel Coward Theatre 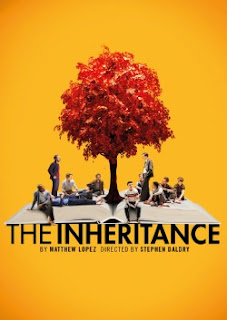 'The Inheritance' is a new play in two parts by Matthew Lopez set in present day New York and which plays for over three hours each. That's a lot of play. It immediately draws comparisons with 'Angels In America' which is of similar length and, while the subject is broadly the same (the lives of young gay men) it's very different. I first heard about it a couple of years ago during a discussion panel that included Stephen Daldry (the director of the play) after a staged reading of 'Bent' at the National Theatre.

We had tickets to see it at the Young Vic on its original run but were there the night the electricity went off for some reason so were given tickets to see it on its West End transfer to the Noel Coward Theatre on St Martin's Lane. It's a bit of a marathon but it doesn't feel that long since it's so engaging and I'm so pleased to finally see it. 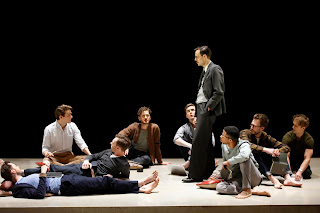 It's an epic tale - as it would be at over six hours - of Eric and Toby and the ups and downs of their lives. Long-term lovers, they live together in a rent-controlled apartment in Manhattan surrounded by good friends in a safe middle-class life. Eric works for a right on social enterprise and Toby is a writer whose first book is picked up as a play and their friend Adam is picked to play the lead on stage. Toby wants to sleep with rich-boy Adam and the relationship with Eric is wrecked. In the meantime, Eric has become good platonic friends with Walter, an older man and partner to rich Henry, who has an apartment upstairs in the building. And Toby finds down and out rent-boy Leo, who  looks like Adam and has a thirst for books and education. 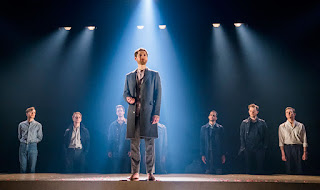 Of course, it's not that straight forward and the play opens with a creative writing class with the group of friends all wondering how to start their novels. Luckily, EM Forster appears as their guide and inspiration and narrator of the first half of the play. Coincidentally, he's also Walter who has a house out in upstate New York where he helped young men with the HIV virus in the 'plague' years. There are lots of references to the 'plague' of the '80s and '90s, a time before the group of friends knew about it and understood the consequences.

There's a lot going on in this play which is deliberately modelled on EM Forster's 'Howard's End' and 'Maurice' while telling the story of modern day gay young men in the present time. The men are all middle class with good jobs and worthy politics, some married and a couple adopting a child, something unimaginable to the previous generation in the 'plague' years. Their freedom has come at a cost. In an angry exchange between Henry, the older man who wants to marry Eric, and the youngsters he shouts 'There are no gay men my age ... or not as many as there should be'  to throw the realty of his life at them, a life in which he might be rich but he's also a survivor of the 'plague'. 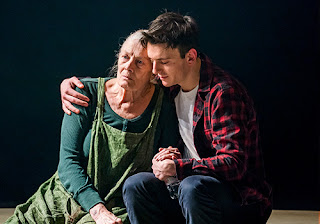 The only woman in the play is Margaret who's son died of HIV in the '80s at Walter's house and she's helped Walter look after his young proteges ever since, burying their ashes in the private grave yard in a grove of trees around his house. By the end of the play Leo has contracted HIV and Eric takes him to the house to wean him off drugs and sex work and help him recover and they meet Margaret who looks after the house.You could've heard a pin drop during the scene where Margaret tells Leo about holding her son's hand while he died in that house. That's class acting. 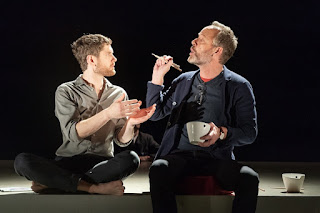 There are lots of scenes to pick out and say 'look at this' and 'this' and 'this' but that would spoil the play for you seeing it. It's a strange play in a way, with the characters narrating what's going on as well as acting it out and I think that's one of the strengths of the play, that it plays with the form rather than following it. There are also some very engaging performances with Kyle Soller and Andrew Burlap as Eric and Toby, Samuel H Levine as Adam/Leo, and Paul Hilton and John Benjamin Hickey as Walter and Henry. Vanessa Redgrave played Margaret. The play is directed by Stephen Daldry who was in the audience on both nights I attended and the writer, Matthew Lopez, was there when I saw part two of the play.

I liked the virtually empty set with a custom-built stage that raised or lowered depending on the scene, and I loved the cherry tree that appears from time to time. The lighting was excellent, sometimes crystal clear and sometimes warm and sultry. All told, it's a great production.

The audience was predominantly male, either in their '50s/'60s or '30s with the younger tending to be in groups. There was also a group of women in their '60s to make me feel embarrassed on their behalf with the talk of orgies. There's a lot of talk of explicit sex in the play and why not? it's part of life, after all. There's also talk about the recent American election and Trump to bring it slap bang up to date. Part of me wondered what the younger section of the audience really thought and understood about the 'plague' and everything that was going on back then.

This is a very good play with a great ensemble cast. I'm very pleased to have seen it and you should get tickets as soon as you can. 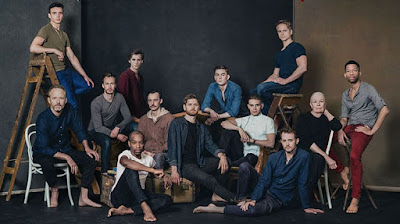