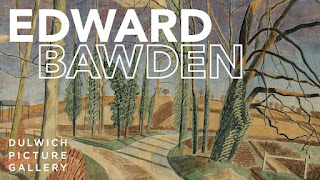 I finally went to see the Edward Bawden exhibition at Dulwich Picture Gallery and I'm pleased I've finally seen it. I don't really know anything about Bawden but have bought some of his designs on cards in the past and that's it. I had a lot to learn.

Bowden seems to have done a bit of everything including film posters, adverts for the Tube, watercolour landscapes, book covers and illustrations, portraits as a war artist, lots of prints, Christmas cards for Fortnum & Mason, designs for menus for fancy restaurants... you name it, he probably did it. I had no idea that he was an official War Artist in the Second World War or that he was taught by Paul Nash. So much that I didn't know. 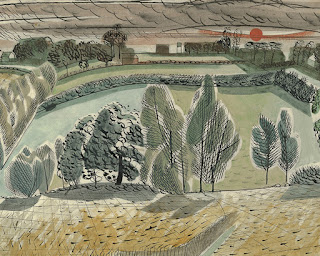 His early works seem to focus on commercial art and watercolour landscapes, some of which look like they include ink pen drawings. All of his works were on a human scale, not the large wall-sized paintings many of his contemporaries were starting to do. I always have a thing about big paintings - they're too big for the average wall so aren't aimed at you or me, but rather at rich people or corporations or public spaces. I prefer something that will fit on my wall thank you, and all of Bawden's fit that criteria. 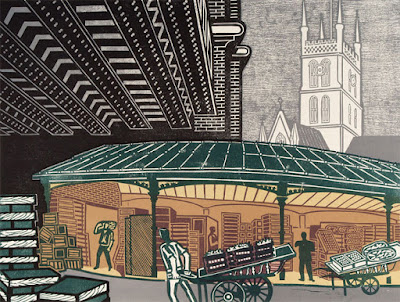 I like that he seemed to do different series of works - markets in London, landmarks, gardens and such like. This one is Borough Market under London Bridge with Southwark Cathedral behind. He also did a great print of Brighton pier. 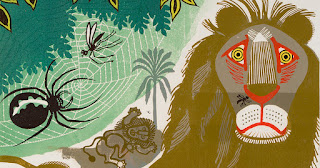 I liked his illustrations for an edition of Aesops Fables including the hare and the tortoise and the lion and the gnat. You've got to feel sorry for that poor Grrrr Lion squirming and suffering with the nasty gnat. He has a lovely touch for telling stories through his art - who needs words when you see the lion's eyes and see him squirming on the ground.

The exhibition is only on for another couple of weeks so see it while you can.