Buffy Sainte-Marie - 'Power In The Blood'

Today Buffy Sainte-Marie announced the arrival of her new album and 'Power In The Blood' will be available on 12 May. It's available to pre-order and if you go to iTunes you can even download the first track, her new version of 'It's My Way' and it's definitely worth listening to it. It's as different from the original version 50 years ago as you could imagine. And what a fab album cover! 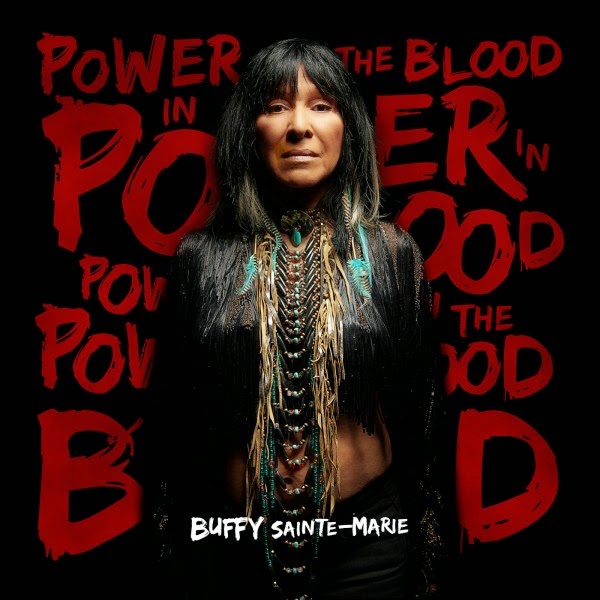 There are 12 songs on the new album, mainly new songs but a few re-recorded 'old' songs. The track-listing is:

I'm hoping I'll hear some of these new songs and new versions when Buffy tours in March. She's playing on Morrissey's arena tour around the UK but will steal away for one evening to play a solo gig at the Tabernacle in London and I will (of course) be there. I've seen Buffy's previous band a few times but I'm looking forward to seeing this new band but with Michel Bruyere still on drums and, I hope, powwow dancing.

I am very much looking forward to this album. 'Running For The Drum' was an out-of-the-blue joy but this is the follow-up to that album in a way you can't really say 'Drum' was a follow-up to 1992's 'Coincidence & Likely Stories'. Buffy's been on the road gigging and spreading the work about 'Running For The Drum' almost ceaselessly since it was released (other than looking after her goats, of course) so this new album has been recorded against a very different background. The almost abrasive beauty of the new 'It's My Way' tells me this will be a very different record.

I am also delighted that Buffy has chosen to re-record 'Generation', a very special song for me. I first heard it on a TV show about Buffy in about 1976 and I've remembered the chorus ever since:

And we'll sing goodbye stars of Hitler
And goodbye bankers trust
Aquarius is coming
And your son is one of us
And me I don't want to go to the Moon
I'm gonna leave that Moon alone
I just want to dance with the Rosebud Sioux this summer….

Maybe one day I will dance with the Rosebud Sioux…?

Email ThisBlogThis!Share to TwitterShare to FacebookShare to Pinterest
Labels: Buffy Sainte-Marie, Power In The Blood