The Age Of Kali

Kali sprang to mind this evening on the way home. Not an everyday occurrence, I grant you, but it sparked memories of Poly Styrene singing 'Melancholy' in the Age of Kali, of William Dalrymple's book 'The Age Of Kali' and of my first encounter with the goddess.

Kali the Hindu goddess is an aspect of Durga, wife of Shiva, and is not the same as the demon Kali whose name is associated with the last age in the cycle of times. In Hindu teaching, the Age of Kali, or Kali Yuga, is the final age when humankind turns away from spirituality, the age of vice and discord, and we're in it now. The world will end in fire and a new, fresh age will begin. 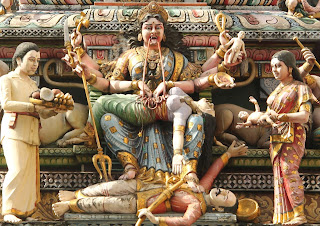 I first met Kali, the goddess, in a wonderfully colourful Hindu temple in Singapore in the early 90s when she was  eating the heart of a virgin. It was all blood and entrails and I moved on. It was a bit like this photo but more colourful. A year or so later is my first strong memory of Kali when I went to Khajuraho in Madhya Pradesh in Northen India.

I was visiting the Hindu and Jain temples in the UNESCO World Heritage Site and came across a couple of smaller temples that were still used occasionally. One was to Kali. I took a few steps inside and it was pitch black, no windows or light reaching inside to let me see what was inside. I thought, OK, I'll take a photo with flash and then I'll see what it's like when I have it developed (this was pre-digital, younger readers). So I did. The flash exploded and then the air exploded around me with shrieks and a rushing of wings all charging at me. I took the hint and got out of there quickly.

Now, once I was out in day light again part of me realised that the sound of shrieks and wings must be bats and I'd disturbed their sleep. Another part of me wondered...

I think it was also on that trip across Northern India that part of Kali's nature was explained to me by one of my guides.  She has a reputation for violence and drinking blood but there is a reason for that. In ages past she and other gods were fighting the demons to protect mankind and she saw that every time a demon was wounded or killed and a drop of their blood touched the earth then another demon sprang up to join in the war. Her way of preventing the demon hoardes from ever-increasing was to eat the demons and make sure she drank all their blood. It obviously worked since we're not overrun with demons today.

Since that time I've always been a bit more respectful to Kali. I have encountered her several times since that journey and I always bow my head slightly at her image. I think of brave warrior Kali rather than blood-thirsty Kali.

When I returned home from that journey and got my films developed and printed I found an odd photo of a dark, blood-daubed statue of what looked to be a goddess. It was very grey and mirky but the splashes of rust on it indicated red. I couldn't remember taking that photo and then I remembered the Khajuraho temples. It was the photo of Kali.

I shall have to hunt it out from the boxes of photos I found last week and remember my first encounter with Kali. 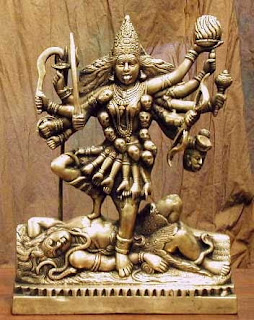